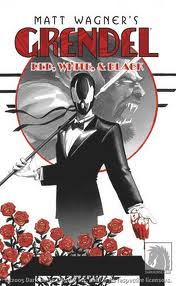 At first glance, Matt Wagner’s Grendel would seem to be a bit out of place in my column. Some of you out there may recognize the name from Beowulf (Pick a version, but Grendel is usually in there somewhere) and Wagner’s initial setup for the story (detailed in Devil by the Deed) could be called an inversion of that famous English epic.

In modern New York City, Grendel is Eddie (that fact being the only thing we know about his real identity), a child prodigy from the Midwest whose struggle to find a challenge in life eventually led him to throwing a world-class fencing championship in frustration. He was then “seduced” by one of the English coaches, Jocasta Rose (the quotes are there, given the fact that he was 16 at the time, while she was in her mid-thirties, making this statutory rape), who took him under her wing for a year. Then Jocasta died of an unnamed fatal disease, leaving Eddie heartbroken. He channeled his grief into becoming a best-selling author named ‘Hunter Rose’ and a costumed contract killer-turned-faceless Mafia don known as ‘Grendel.’

He quickly found himself a nemesis in Argent, a cursed, centuries-old Algonquin man-wolf whose bloodlust is only tolerated by the authorities because criminals were his frequent target. Both wound up being entangled in the life of Stacy Palumbo, a young pre-teen girl who would prove to be the death of them both. While the story would continue from there to encompass varying levels of science fiction (including nuclear wastelands) and mysticism (including the soul of Hunter Rose popping up a few times), it is the initial period described above that is the focus of the series, Black, White & Red, so named for the only colors used in the artwork.

While all the stories are written by Wagner himself (while he has allowed spin-off series of his “Grendel” imprint to occur under other writers occasionally, only one other writer, Greg Rucka, has ever touched the core characters of his saga), the artwork is done by various artists. One suspects that, as a writer/artist himself, Wagner tailored each of the stories in this collection to show the artists at their best.

There are, of course, direct stories relating to Hunter Rose and his various associates. Details of Hunter’s history are given more detail in such stories as “Devil on My Back” (Teddy Kristiansen’s impressionistic pencils having the title figure be a frequent feature of the work), where Hunter’s tracking of a teenage pyromaniac leads him to reflect on his own unhappy Midwest childhood; “Devil’s Apogee,” where Mike Allred uses his standard real/cartoon borderland pencils to recount Eddie’s escape from his childhood through fencing while performing a messy hit on a target; “Devil’s Coup,” which details Grendel’s takeover of the Ciccone crime family through mostly official documents and newspaper articles (ably done by Timothy Bradstreet to the point of making me wonder why they didn’t do a similar tack with his artwork in his story with Brian Azzarello in Gangland); and “Devil’s Requiem,” where Hunter goes through his torrid memories of his one year with Jocasta Rose, with David Mack showing beautiful panel work that could be mistaken for fine art in some cases.

Larry Stohler, Hunter’s right-hand man and informant, is the focus of the Bernie Mireault-drawn “Devil’s Cue,” where he uses a “chance” encounter with a Bolivian cocaine importer to smoke out his secrets (helped by said importer sampling heavy doses of his own product and the off-kilter, misshapen artwork reflects that distortion), while Argent take the spotlight in “Devil’s Labyrinth,” showcasing the undeniably brutal methods he is willing to employ to take down Grendel, with Guy Davis using his standard chiaroscuro drawing and foreboding landscapes to grind the grit into the story.

The stories relating to Stacy pulse like ominous omens of the tragedy to come. There’s Hunter teaching her chess while a parallel chain of events has him tracking a hidden crime boss in “Devil’s Mate” (illustrated with minimalist grace by D’Israeli). There are also Stacy’s feelings of isolation in her life with Hunter in “Devil’s Garden” (done in haunting detail by “Concrete” creator Paul Chadwick – the last shot in particular can give you the creeps) or the sheer pent-up fury that Stacy and Hunter temporarily vent on others in their frustration with each other in “Devil’s Cage” (Jason Pearson draws the characters in detail that is almost reminiscent of manga).

But I submit that these are neither the most important nor the most memorable stories in this collection. By all means, read the preceding front to back, as they are good stories, with everything that designation implies. It’s just…maybe it’s because I made such a thorough study of Grendel myself during the height of my comic collecting, but I feel like all I’m getting from these stories are slightly more nuanced details on things I already knew.

Also, we’re talking about larger-than-life, theatrical characters here. Yes, they are interesting, cool to look at and listen to, but the average person’s ability to relate to them tends to get stymied by all that. It is easier to connect with folks like the apparently shaken socialite, Michael Bendis-Hayes, in “Devil’s Witness” (Woodrow Phoenix’s illustrations are easily the most cartoonish of the collection), and the unnamed and cautious old-school hit man who runs afoul of Grendel in “Devil’s Mark” (with smooth-if-slightly-distorted linework by Troy Nixey).

That’s why, for my money, the real winners of this collection are stories like “Devil’s Advocate,” in which Grendel’s lawyer retraces the degradation of his upper-middle-class lifestyle to Grendel “retaining” his services (the only story I’ve ever seen Tim Sale illustrate that didn’t feel derivative). “Devil’s Tongue has Grendel interrogating a low-level crook for information on a clandestine business deal in vicious fashion (Duncan Fegredo’s drawings of the same are like watching a car accident – ugly, but you can’t take your eyes off it). In “Devil’s Thrush,” a lowly nightclub singer runs into Hunter at her club (Ho Che Anderson’s style was probably the one that worked the least well for me, as the outlines of the characters were broad and the surroundings murky, making the action hard to follow). In “Devil’s Blessing,” an encounter between Grendel and a hit squad has ugly consequences for a cleaning lady and her child (C. Scott Morse makes up for lack of detail with plenty of energy). “Devil’s Curse” has a mob boss seeking the help of a Voudon priest in Harlem to take down Grendel (illustrated with twisted aplomb by the Pander Brothers). And “The Devil’s In The Punctuation” details the rise and fall of Grendel’s book editor in the form of a book proposal (giving Stan Shaw an excuse to draw in New Yorker-style illustrations with covers of Hunter’s novels and the reviews to them on the bottom like a CNN newsfeed).

There are even a couple of experimental pieces in “Devil’s Toll,” which only uses one word a panel to tell the story of how Grendel deals with those who refuse to pay tribute (John Paul Leon does a bit better with his murky drawing than Ho Che Anderson but that’s just barely) and “Devil’s Domain,” which uses full-page panels to set the stage for evocative prose poetry of the illustrated scene (Chris Sprouse does a wonderful job doing what could be argued as the most realistic artwork of the whole collection).

Wagner’s stories throughout this collection are consistently good. Even when the artwork may flag, it’s a testament to his enthusiasm for his creation of so many years that the writing never does. BUT…I feel that designation comes with caveats. If you’re looking for a good, fun read, go somewhere else. These stories are heavily steeped in the film noir tradition of bad situations, no easy answers, and few, if any, happy endings. Wagner uses Hunter Rose and everyone around him as a prybar to look into the uglier aspects of the human condition, which can only be called “fun” to a select few. Often, you’re coming face to face with psychological horror at its finest, the petty ways human beings destroy themselves. That, more than anything, is why I feel that this series has a place in my column. But there is more to come from this vein. Please stay tuned….