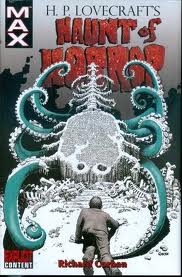 This month, we’ll be looking once again at the work of Richard Corben, who was profiled in this column for his Edgar Allan Poe’s Haunt of Horror under the Marvel MAX imprint. Of course, once you’ve adapted dear old Uncle Edgar, HPL is the next logical step, right? Corben apparently thought so, as H.P. Lovecraft’s Haunt of Horror was the follow-up to his earlier Poe adaptations.

Corben is no more a stranger to Lovecraft adaptations than he is to Poe. One particular piece that gets talked about is his earlier adaptation of Lovecraft’s “The Rats in the Walls”, with heavy, uneasy emphasis on the rodent aspects of the story. While that particular story is not featured here (to much online grumbling), we DO get what may seem like some of the most off-beat adaptations of HPL’s work that I have ever encountered. What makes them off-beat? The source material’s obscurity…anybody who is looking for a comic appearance of Cthulhu, Nyarlothotep, Yog-Sothoth, and any of the other usual cosmic suspects would be well-advised to look elsewhere. Corben’s selection of his material mirrors the thoughts of Ramsey Campbell in the introduction to Cold Print, in that Corben is less interested in the usual cosmologies than in conveying the sheer unfathomable scope of the mysteries that Lovecraft’s best prose hinted at.

Surprisingly, only three of Lovecraft’s stories are adapted for this collection: one per issue. Issue #1 fittingly enough features “Dagon”, Lovecraft’s first in-print story and the harbinger of the cosmic horrors to come. For those of you who are a little hazy on the plot, we read the final words of the sole survivor of a U-Boat attack as he recounts the inexplicable idol, creatures and nightmares that he encountered at sea. Issue #2 gives us one of my particular favourites, “Erich Zann”, the deaf-mute violinist whose playing keeps an unseen horror utterly at bay. The third and final issue presents us with a slightly updated version of “Arthur Jermyn” (more properly known by Lovecraft’s word-heavy title, “Facts Concerning the Late Arthur Jermyn and His Family”), as our title scholar’s attempts to ingratiate himself into an anthropological society end in a fateful disaster, with a haunting final image that would be a horrible one to put on film with the sound in. In each of these, Corben references the original script when necessary, usually cutting down on the wordiness of a particular line so that the artwork can do the rest.

While these are all good, solid choices for those of us who would like to see something other than the usual Lovecraft standbys, I seriously question Corben’s use of only one story per issue. Granted, Lovecraft’s prose can sometimes be so long, detailed and cumbersome that a ten-page adaptation of some of his work can be extremely trying and difficult. But, as anyone who has delved sufficiently deep enough into Lovecraft can tell you, there are plenty of his other stories that have comparable length and depth (“The Outsider”, “The Festival”, “The Terrible Old Man”), which could have been adapted just as easily to help fill out the collection.

Okay, so none of the usual Great Old Ones, only three actual stories adapted, and plenty of space to fill…what does Corben use to plug the page-count gap? None other than selected poems from Lovecraft’s poem cycle, “Fungi of Yuggoth”, which are adapted in much the same way that Poe’s poetry was used in the previous volume. The poems themselves (completely reprinted right after the adaptation, which is also true of the stories) are just brooding, vague hints of horrors beyond imagining. But Corben does an excellent job in bringing those horrors to full, hideous life. “The Scar” (which is based on the poem, “Recognition”) actually shows off the Fungi of Yuggoth while setting up a simple-but-nasty story that would seem to involve a time loop. “A Memory” speaks of one of Lovecraft’s favourite themes – the familial curse – in the form of an explorer following in the path of his ancestors…with deadly consequences. “The Canal” has one of the more radical setups: a gay black man looking for his lover in a decaying city that is suffering from a downpour. He won’t be as happy as he thinks he would be when he finds said lover. “The Lamp” follows a team of archaeologists as they uncover a four-thousand-year-old Egyptian tomb that has more than what they realise, at first. “The Well” shifts the scene to Appalachia, where hillbillies find something in the ground that they can’t leave alone. “The Window” seems to have the happiest ending of the collection…if you count cosmic annihilation as particularly optimistic.

The poem adaptations showcase two of the reasons why I can partly forgive Corben’s neglecting the aforementioned prose works. One, much as he did with the Poe poem adaptations, he manages the enviable feat of balancing the need to create a new story with the equally important need of maintaining the ambience of the source material. Two, “Fungi of Yuggoth” is an oft-overlooked aspect of Lovecraft’s work. Yes, a great deal of it can come off as uneven blends of Lord Dunsany and Poe, but the poems do a good job of conveying many of the cosmic concepts of his better-known prose works. This collection certainly inspired me to seek out the whole poem cycle and I consider myself the more fortunate for it.

Corben’s artwork is its usual excellent self, all done in grey tones (with the major exception of the individual covers, which contain a dash of one particular colour at certain spots). The most prevalent feeling one gets from the various settings that he paints is decay, whether it’s crumbling buildings, ancient ruins, or desolate natural vistas. Whenever he references a more pure natural force, such as the ocean or the stars, he suggests the overwhelming scale of these elements, more than large enough to dwarf the human race’s pitiful claims of dominance (I daresay that Lovecraft himself would likely have approved of Corben’s approach). The humans of the piece have at least the skill level of a decent B-movie actor in terms of conveying emotions, which are usually dread, terror, confusion, and occasionally forced joviality. The faces themselves are either long, round, or some variant in between the two. The line work and proportions on these are clean and believable, though sometimes the gum line is a bit prominent on them, particularly when they smile. As for the Lovecraftian creatures of the pieces, well, let us just say that each would be right at home in an actual story of Lovecraft’s, from the amphibian horrors of “Dagon” (and the entity that they worship) to the spider-like creature shown on the last page of “The Lamp”. Corben even does us the favour of showing what he thought was behind the curtain in “Erich Zann”, something Lovecraft could only hint at.

All in all, the collection is a mixed bag. It has some real treats for those looking for something different than the usual Lovecraft pastiches, but could have been a lot more had more stories been included. But it is still worth your time, trouble and money to check out.

You can buy H.P. Lovecraft’s Haunt of Horror from Amazon.com.