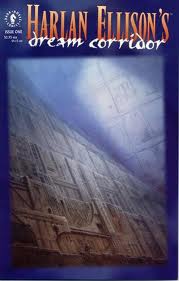 Harlan Ellison is one of the greatest short story writers of the 20th century that you’ve probably never heard of. In spite of having an output that is easily the equal of contemporary Ray Bradbury and numerous television credits that includes the classic Star Trek episode, “City on the Edge of Forever”, the man remains obscure to most of the mainstream. Actually, given the man’s strongly-held opinions, which he has never been shy about voicing to anyone anywhere, and constant assertions of his own talent that some can (and have) labeled egotistical, there may be a reason for that. To those who know about Ellison, his combative style against the people he deems either annoyances or grave threats is as unforgettable as any of his short stories. He has marched with Martin Luther King in Selma, helped in the grapefruit strike with Cesar Chavez (and, to this day, refuses to shop at Safeway for their role in trying to break it up), was the first serious critic of the repetitive nature of early video games, and has been a firm resister of labels in terms of what genre that the bulk of his writing could fall under. Actually, he made a convincing case as to his writing’s uniqueness with his own comic series through Dark Horse Comics in the 1990s, Harlan Ellison’s Dream Corridor.

Ellison himself is your guide through the weird, Daliesque landscape that the framing sequences take place in (ably illustrated by Eric Shanower, with just the right mixture of authentic detail and surreal juxtaposition), introducing each of his stories, along with the occasional snippet of background information that helped form them. Along the way, you also hear plenty of opinions that remain just as relevant to our new century as it did during the tail end of the old one (His thoughts on the “living, breathing enemy of art,” in particular, are not to be missed). But the framing sequences are more than about Ellison beating his own chest. Ellison also takes a few moments to introduce every writer and artist who put in the time and effort to adapt his stories, including credits, biographical information, and any personal friendships that may be part of the mix. For all the Ellison haters who have coalesced over the years, this simple act of recognition puts the lie to some of their more-vicious attacks against the man (which have been legion).

The stories themselves are all over the map. The straight-up science fiction piece, “Quicktime” (adapted by legendary creator of Swamp Thing and New X-Men, Len Wein, and illustrated by famed Micronauts and Alpha Flight illustrator Pat Broderick), which tracks a fleeing nobleman’s escape from a rebellion through time travel, stands alongside the artistically beautiful and thematically nasty western, “End of the Time of Leinard” (adapted by Faye Perozich, who also adapted Anne Rice’s Interview With the Vampire for comics, and painted by Western comics icon, Doug Wildey), chronicling the deposition of a town sheriff, now that his job is done. Crime stories like “Turnpike” (adapted by Max Allan Collins and drawn by Craig Elliot) and “Rat Hater” (adapted by Perozich and drawn by Michael T. Gilbert) are presented with absurdist tales like “Cold Friend” (adapted by R.A. Jones and ably drawn by David Lapham) and “If This Be Utopia…” (written and drawn by Phil Foglio, whom Ellison gives credit to for salvaging one of his worst stories and turning it into something worth reading). Even the everyday lives of unusual professions get looked at in “Pride in the Profession” (adapted by Nancy A. Collins, writer of many, many Vertigo series, and painted by Heinrich Kipper), which follows the life of a hangman, and “The Rough Boys” (adapted by Jan Strnad and illustrated by Skip Williamson), which follow a pair of hitmen in the aftermath of a job.

But Ellison is best known for his dark meditations on the frailties and failures of the human condition through the supposedly safe confines of science fiction and fantasy. These get the lion’s share of the representation in this collection. In Steve Niles and John K. Snyder III’s take on “S.R.O”, we see the rise of a petty street hustler who uses the unexpected arrival of alien performance artists to boost his standing in the world…with a payoff that is devastating. Through the prose of Diana Schutz and deeply disturbing art of Teddy Kristiansen, we meet “Knox”…that is, Charlie Knox, a man who works for a future totalitarian party that actively promotes racism and cracks just a little more inside with each “enemy” that he kills. The aesthetically beautiful painted art of Mike Deodato Jr. serves only as a mask to Peter David’s rendering of “Catman”, tracking a thief in a future where thievery is totally unnecessary and who has a law-enforcement father, to boot. Nevertheless, there are some things in this world that are still forbidden, including Mekcoucher, literally the ultimate sex machine. “On the Slab” is nothing less than a tribute to HPL himself by Ellison’s own admission, with a protagonist from Providence, a rock concert promoter who becomes obsessed with the strange, cyclopean being that he is showing off to the public. Perozich once again does the writing honors, while the talented Gary Gianni (who illustrated the best comic version of the classic pulp character, the Shadow, ever) uses shadow and light to create a haunting tale. But my personal favourite of the bunch is “Enter the Fanatic, Stage Center”, adapted by Stefan Petrucha and illustrated by Tom Sutton, chronicling a town’s slow slide into chaos as a painter unveils its darkest secrets through the public display of his canvass.

But, with Ellison, there’s always more. Not merely being content with having some of his best work adapted to comic form, he takes the extra step of taking each painted cover of the series and making a new, original story with it. The first two issues and their paintings form the only two-part story in this collection, “Midnight In the Sunken Cathedral”, where a young Navy man goes deep-sea-diving into the Bermuda Triangle to find the source of some strange readings…only to come face-to-face with a father that he thought was dead for more than forty years. “Pulling Hard Time” is a science fiction tale that describes a future form of incarceration that proves one of my partner’s Rhi’s favourite sayings: “Hell comes customised.” “Anywhere But Here, With Anybody But You” follows a man through one of the most bewildering moments of his life – coming home to find that he is being divorced by his wife and that she’s taking everything with her, the kids included – with a remarkable ending that suggests how much of our lives can become our own prison. “Chatting With Anubis” has a touch of “Call of Cthulhu” to it, as it purports to be written in the ancient Chinese language of Yin, unspoken since the 12th Century BCE. What our Chinese author has to tell about his and an American’s girl descent into an ancient Egyptian tomb warrants the extra security. Finally, “The Museum on Cyclops Avenue” is the story of a man talking about the greatest love of his life…a woman who just happens to be a hunter of legendary monsters.

You may be appalled, delighted, horrified, intrigued, disgusted, and fall utterly in love with this collection. One thing I guarantee you that you will not be, dear readers, is bored. Much like its creator, the stories in “Harlan Ellison’s Dream Corridor” are utterly unforgettable. You may find those stories echoing in your head for some time to come, afterwards.

You can find Harlan Ellison’s Dream Corridor, Vol. 1 on Amazon.com.