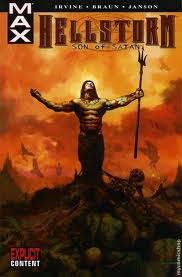 I look at Marvel Comics’ MAX line as a case of “too little, too late”, a massively-missed opportunity that should have happened sooner than it did. The initial idea behind the concept came in the late 1990s, when the management over at Marvel noticed how much the edgy and mature Vertigo line was cleaning up in both sales and respectability over at DC Comics. Plans were laid, advertisements were placed…and, just as quickly, it all went away. At the last moment, management decided to double down on the family-friendly, superhero material that they were convinced was the key to the company’s future success. In the end, it proved to be anything but. In spite of the fact that Marvel came to rule the roost in terms of superhero movies during the 2000s, it wasn’t enough to stop the financial bleeding that their own short-sighted decision-making had thrust upon them. The MAX line was launched in 2001 as part of Marvel finally shedding the much-hated Comics Code that had hampered creativity in comics for the last half of the 20th Century (DC had done this roughly two decades before), but the moment of Marvel asserting control over its own destiny had long since passed. In 2009, in a move that still irks me, Marvel Entertainment was bought out by Disney for a paltry $8 billion. It makes looking over the truly excellent MAX titles like Hellstorm: Son of Satan that much harder. If this sort of material had started appearing in, say, 1997, maybe Marvel would still have its independence.

Our title character is actually a unique riff on the much-fabled Omen trilogy, Daimon Hellstrom (sometimes misspelled as “Hellstorm”, a move that Daimon doesn’t discourage). He became a superhero for the express purpose of pissing off his dad, a guy who may or may not be the actual biblical Satan. His demonic heritage gives him the ability to conjure up hellfire, usually in the form of a trident, gives him some limited psychic abilities, and also gives him enhanced physical abilities in the strength and agility departments. As befits a character who was imagined in the late 1970s to early 1980s, he looked fairly ridiculous in his original incarnation, with a costume that consisted of little more than a pair of red pants, matching boots and cape, and no shirt to highlight the pentagram engraved on his chest. I am happy to report that not only is this version much more toned-down, he also appears in a first-rate supernatural noir mystery that’s as much about the double-crosses as it is about street-level metaphysics.

The setting is post-Katrina New Orleans, where Daimon’s dad is sending packs of demons to harvest body parts all over the still-struggling city. The line between our world and “down under”, according to Daimon, has always been particularly thin in this city, but the hurricane did a good job in making it nearly non-existent. Daimon is guided to the spot by a dream of a hawk being torn apart by demons. There was also a caduceus involved, which is why Daimon listens to a doctor recounting a tale of a pregnant woman brought in by the NOPD just a few minutes before she gave birth. A couple of weeks later, the doctor spots her again with the kid…only, now, the kid seems to be five years old and able to turn himself into a hawk. It turns out that the doctor had a close encounter with the goddess Isis and her son, Horus. They’re in New Orleans on what has been Isis’ own ongoing quest for the last five thousand years: the reassembly and resurrection of her husband, Osiris. Of the fourteen pieces that were made when Set chopped him up on the banks of the Nile, there is always one that has consistently eluded her. For the sake of politeness, I’ll refrain from saying it here, but I will note that Isis couldn’t have conceived Horus from Osiris’ corpse without it (That actually doesn’t sound much better, does it? Hell, I’M not writing this story, so screw it…so to speak).

Seems nice, simple and straightforward, right? Not when Daimon’s father is involved in the mix. Remember that the demons are harvesting body parts, themselves, at the moment, so that couldn’t be coincidence. Plus, old Scratch and Osiris have been fighting over control of the Underworld for millennia. So, why would he want to give Isis a hand?

Alexander Irvine’s basic premise that I’ve just outlined is pretty good. But he takes the admirable step of going deeper with the overall material. He frequently draws insightful parallels between the devastated Big Easy and ancient Egypt throughout the script, from the abandonment of the population to the fact that acacia trees grow in both spots (Daimon sarcastically notes at one point, “Right now, it seems like the only thing New Orleans has that Ancient Egypt didn’t is me”). He also tackles the ever-tricky issue of faith, putting forth a good argument that it is a game that is rigged to benefit the divine and infernal few on the backs of the true believers they exploit.

Heady-sounding stuff, but Irvine thankfully takes the necessary step of making it all palatable with entertaining characterisation and dialogue. Daimon is now a man in his early 40s, which gives him maturity, a love for classic quotations, and extreme wariness in all things concerning his father. But he and his dad still keep in touch by cell phone (One of the great running gags of this series is that, every time Daimon’s dad calls, the ringtone is a lyric from some devil-related song, from “Sympathy for the Devil” to “Devil Inside” to “Shout at the Devil”). They are cordial when they speak. They just don’t trust each other. Demons, on the other hand, piss off Daimon on sight. When he can get away with it, he makes a point of killing them. The story is almost exclusively from his POV and he gives a smartass running commentary on everything he does, sees and deduces. Overall, he comes off as a slightly-more-honourable John Constantine, concerned about doing the right thing for everybody involved, even if certain people wind up losing, including him. Isis is a hard-nosed, grimly determined sorceress, as befits a goddess of sex and magic. The only thing that matters to her is the resurrection of her husband. Anything that gets in her way is an automatic target. She can even summon up an army of giant scorpions to help her out (who have some of the best dialogue of the last chapter). Horus is portrayed as a fairly angry kid, with no real thought on why he’s angry or what he should do with it. This effectively makes him Isis’ enforcer, but Daimon has a great deal of sympathy for the boy. He recognises that they share a lot in common in their rather fatherless histories.

Russ Braun’s pencils and Klaus Janson’s inks on the artwork are simple and understated. It would be a stretch to proclaim them as “brilliant” (That designation belongs to the story, in my humble opinion), but it does get the job done for whatever needs to be shown, be it the streets of New Orleans, the Egyptian Hall of Judgment in the Underworld, or the symbol-laden landscape of Daimon’s dreams. Daimon himself is drawn with a look that had Johnny Depp in mind when conceived: shoulder-length red hair, day-old stubble, and psychoactive tattoos covering his entire back (which, according to Braun, were a replacement for the original pentagram scar) that swirl and change, depending on the circumstances that Daimon finds himself in. Demons are shown in all their subhuman horror. Isis is depicted as the subtle temptress that the script portrays her as, while Horus is given the most changes, from baby to five-year old boy to hawk to young man to hawk-headed bouncer. Daimon’s dad is only seen in shadows, the wall behind his chic modern desk dominated by up-to-date video monitors. Again, it does the job, but there’s nothing truly remarkable about it.

In life, timing is everything. If the timing is off just a little bit, the results could be disastrous. Oddly enough, I think that might be just as much a theme of this story as it is for the twisted history of the Marvel MAX line. Read it yourself and see if you don’t agree.