A major theme of Lovecraft’s work is degeneration. One of the things that tend to get forgotten in the midst of talking about all those ancient gods, inhuman races, and alien cities is the fact that a good many of these things are way past their prime. Yes, they can still be a threat to any humans who are unlucky enough to wind up stumbling upon them, but sometimes – just sometimes – enough of their vitality has been leached off to where you can actually deal with them. HPL’s Texas pen pal Robert E. Howard understood that implicitly and his successor Joe R. Lansdale injected that heavily into Riders of the Worm and Such, which is easily his most Lovecraftian story of Jonah Hex.

Right up front, we’re told that this is the Texas Panhandle circa the 1870s (which, given Wild Bill Hickock’s death in 188?, would make this a decade before the events in Two-Gun Mojo). Hex has been cornered on the farm of an old comrade from the Civil War by a pack of bounty hunters led by the armor-clad Stove-Belly Jack. Needless to say, Hex comes out on top, but not before his old comrade and his wife get tortured to death, and Hex catches a bullet that goes all the way through him. He winds up passing out from blood loss on the prairie, only to be found by a pair of travelers, an old geezer called “Ears” and a younger guy called the “Kid” (as in Henry McCarthy AKA Billy the Kid). Ears doesn’t fare much better than the other dead people behind Hex. Something comes out of the night, grabs him through the window of the shelter they’ve all taken, and rips him in half. 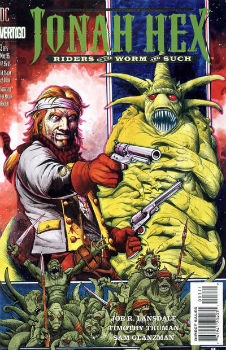 morning): an ancient race of worm creatures (Lansdale makes an explicit reference to the REH classic, “Worms of the Earth”), driven underground by the tribes long before the coming of the white man. Sadly, thanks to the constant digging of the inept farmer, Errol Autumn (described accurately as “a rather dumb son of a bitch”), the worms found a way to go topside again. At the head of the topsiders is a pair of brothers, Johnny and Edgar Autumn. Though they take their last name from Errol and his wife gave birth to them, something came out of the ground to impregnate the wife.

On the face of it, it sounds like a fine, spooky Western with more emphasis on the supernatural than the last collection. But it’s worth remembering that this is Joe R. Lansdale, who never met a straight storyline that he couldn’t bend into something unique, particularly when the state of Texas was involved in the process. The ranch I was talking about? It’s run by an Englishman by the last name of ‘Graves,’ who also has some vain hopes of turning it into an emporium of culture (all this inspired by a chance encounter with Oscar Wilde during his worldwide tour). Needless to say, the cowboys he has to work for that purpose aren’t exactly Lord Byron or Francis Scott Key, but they stick around for the high grade of pay that he’s offering.

Also, the worms had an advanced civilization once upon a time (which we see in the form of elevators and a car with fuzzy dice, of all things), but they’ve long since forgotten how to work the machines that their ancestors built. Johnny and Edgar are clear signs of how far the worm race has fallen. Anybody who remembers Atla from “Worms of the Earth” is going to be appalled by these boys. They are the epitome of inbred, Texas white trash (which is ironic, considering that they’re half-human and half-worm). Name a cliché from that particular stereotype and chances are they’ve done it or will do it in the course of this story.

I should also give a special shout-out to Hex’s love interest in this story, Hildy. For the most part, she looks and acts like most women I’ve known down South all my life. She’s a bit on the heavy side but still on the right side of cute. She also doesn’t take any crap from anybody she’s not prepared to put up with (She spares all of us some bad poetry close to the end). In an industry that too-often only shows the successful female graduates of a eugenics program, it’s a nice change of pace.

Tim Truman and Sam Glanzman’s artwork remains as solid as ever on this collection. Things are a bit cleaner in terms of the setting this time (though you can only be so clean when you’ve got farms and ranches from the period in the mix) with wide open spaces being the usual rule. The only settlement that we see is the decaying worm city belowground, which has plenty of in-jokes and sight gags if you’re looking in the right spots. The worm creatures are depicted as the appropriate shade of pasty throughout, and the final villain that Johnny and Edgar call “Big Worm” is an ugly enough sight to be part of HPL’s stories.

It seems a shame that Lansdale and Truman only did one more Jonah Hex series after this one. I keep wondering what other wonderful stories they could have made together that might have curbed all the mistakes on Hex the film (It might not have stopped them from hiring one of those mistakes, Megan Fox, but still…). But anybody who’s in the mood for some more supernaturally-flavored Wild West action from this pair, may I recommend hunting down the Topps miniseries that these two did for the Lone Ranger?