When something becomes successful, sequels tend to be a common result. Of course, when you’ve got this many people who revere the 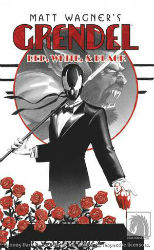 original, you’re faced with a dilemma. You want to create new material that actually makes strides over the original story in a meaningful way, but you also want to keep your built-in audience happy as much as possible. It’s a delicate tightrope to walk for any creator and the field below is littered with the bones of any number of them who slipped on it.

Of course, when you’re Matt Wagner and the character is Grendel, you’ve got a little more wiggle room than most creators out there. So, when Wagner followed up his hit miniseries, Black, White, & Red with Red, White, & Black (both so-named for the only colors used in the palette of the artwork), he strove to create a different set of stories than his previous collection had been. One could say that Wagner didn’t just flip the title to make a new collection. He flipped the focus of the stories, as well.

To be sure, there are still straightforward stories here about the bit players in Grendel’s life, whether one is talking about a professional tagger in “Devil Colors” (Jim Mahfood’s pencils are the only story to also come with a suggested “unofficial soundtrack”), a crooked United States Congressman who has become Grendel’s target in “Devil’s Dash” (a story which reads like a cross between a fairy tale and a news report, a sensibility reflected by Tom Fowler’s art), an overly eager rookie beat cop in “Chase the Devil” (Mike Hawthorne’s lines are somewhat reminiscent of D’Israeli’s artwork from the last collection), a mob boss hiding from Grendel’s wrath in “Devil, Devil On the Roof” (I wouldn’t call Zander Cannon’s artwork “good,” but it gets the job done), a hapless, low-level crook fleeing from a Grendel who seems to be giving him his marching orders in one-word Simon Says fashion in “Devil Say, Devil Do” (Stan Sakai captures the loneliness of the chase, which only has Grendel’s words and the sound effects for text), a mob doctor in over his head in “The Devil’s Tide” (Mike Huddleston renders such lovely detail work on an increasingly ugly story of degradation), and a new member of Grendel’s crew with a secret that gets him killed in “Devil’s Sentence” (John K. Snyder III’s artwork can be blocky, but fits the mood to a tee). Indeed, one piece, “Devilish Escapades,” purports to be “Seven Minute Mysteries” on its first page (which Phil Noto renders like a pulp cover). The seven pages that follow this opening page act as seven separate vignettes, with focus on the bit players, all of them ending in blood and with an appropriate picture for each (reminiscent of White Wolf’s fiction inserts in its roleplaying sourcebooks).

But this time, more focus is given to looking at the overall story of Hunter Rose’s rise and fall. The broad outlines are told in three very haunting ways, starting with “The Nasty Lil Devil,” which retells Hunter’s story in the manner of a children’s fairy tale (made all the more haunting when we see the writer/illustrator’s true identity in the final full-page panel, though the deceptively cute Jill Thompson artwork should do a good enough job before that). Then there’s “Devil’s Karma,” which recasts the story in terms of full-page panels of Japanese imagery (ably illustrated by Andi Watson), each denoted with a separate haiku poem. Finally, there’s the most harrowing of these treatments, “Devil, Deed, Denouement,” which turns the whole story into a blues tune…the kind where the hellhounds aren’t just on your tail, but lying in ambush for you up ahead. The final verse always brings cold chills to my spine, a defiant shriek of promise and pain to come. It’s more than enough to make me forgive the overall sketchiness of Ashley Wood’s pencils (which actually fit the rough composition of Wagner’s verses).

However, finer details on previously mentioned events are the main focus of this collection. “Devil’s Assumption” recounts how Grendel came to work for Sonny Ciccone, the mob boss he’d later replace (I might add that Ciccone comes off as one of the biggest pricks ever written for comics, which finds a mirror in Andy Kuhn’s jagged artwork). The scene of one of Grendel’s first hit jobs for Ciccone is picked over by detectives in “Evidence of the Devil,” Cliff Chiang’s pencils emphasizing the fact that there is nothing left on the scene that they can trace back to Ciccone.

Meanwhile, Grendel’s arch-foe, the man-wolf Argent, is the focus of two doomed escapades. First, “Devil Dreams” (Kelley Jones creates, hands-down, the best version of Argent ever penciled with this) finds Argent partaking of a bush league occultist’s magic smoking mixture, which brings him face-to-face with the surprising source of his centuries-long curse. Then there is “Rat on the Devil,” in which two NYPD detectives dump a low-level hood in one of New York’s worst sections (My money is on it being Hunt’s Point, which I’ve heard called NYC’s badlands) so that Argent can “ask” a few questions. Darrick Robertson’s squeaky clean artwork makes for a jarring contrast to the ugly surroundings, characters and fate of the would-be stoolie.

Three interlocking stories take apart one of the more memorable parts of “Devil by the Deed,” the final party hosted by Barry Palumbo. “Devil Crossed” reveals Palumbo’s manipulations of both Grendel and Argent in the hopes that one will kill the other, never once realizing that he’s just as much in the crosshairs (the noir setup highlighted by Phil Hester & Ande Parks’ chiaroscuro artwork and a key red light that points to Palumbo’s doom). “Devil’s Clash” occurs a few moments after the previous story’s wrap. Grendel is doing his best to get Barry’s unconscious niece, Stacy, away from the murder scene, having failed to anticipate that she’d find the body first (It is a testament to Hunter Rose’s curious ethics that he always went out of his way to be kind to children, when possible). Michael Avon Oeming lends an angular styling to two more mistakes on Hunter’s part: his first-ever confrontation with Argent and Stacy being abducted by another while he fights. “Devil’s Retribution” (done up with superlative grace by Farel Darymple) reveals the identity of Stacy’s abductor, a predatory pedophile named ‘Bernie Gene.’ As ugly as what he plans to do to Stacy before Grendel catches up with him (You feel yourself veering between a laugh and a scream at Grendel’s line: “I’m smiling for the camera”), what happens next is brief but uglier. To underscore how bad, a direct quotation from “Devil By The Deed” appears in the last panel.

Finally, there are two other known incidents of Grendel’s history that are given the deluxe treatment. “Roulette Du Diable” describes in detail the 23 deaths of crime bosses that were the Seaboard Massacre. Dan Brereton lends his trademark moody painting to Stacy unconsciously re-enacting each death with the rituals of childhood (watching a cartoon on a big screen TV=mob boss being shot at the front of a movie theater; knocking down a row of dominos=crime lord getting cut down with others in a drive-by shooting). “Devil’s Eulogy” is the closing piece of the collection – apropos, since it details the last conversation between Grendel and Argent while Grendel is bleeding out from a fatal stomach wound. Michael Zulli infuses the scene with a dark glamour as Hunter Rose tells Argent everything that he thinks is worth revealing before his rapidly approaching death: his drive for power, his mistake in ever using Stacy to manipulate Argent, and the realization that he was always to destined to fall, sometime.

This collection is a bit more bearable than the previous one in terms of readability. Yes, it has no happy endings for anybody, but it lacks the relentless vibe of Grendel: Black, White, and Red. The mood this time is more tragedy. Like Hamlet, or a car accident, you know that it’s going to end ugly, but you can’t take your eyes off what’s coming. This collection helps to illustrate why people continue to feel that way about what is arguably Matt Wagner’s greatest creation after three decades.

You can buy Grendel: Red, White, & Black from Amazon.com.