“He was a hero to some, a villain to others, and wherever he rode people spoke his name in whispers.” – John Albano, describing his creation, Jonah Hex.

Some of you might have heard of a comic-book-based movie a few years back called Hex. I say “some of you” because that one quite 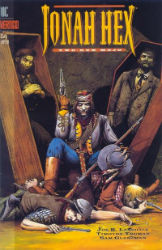 rightfully sank beneath the waves for being a complete fiasco on the order of Judge Dredd. It turned out to be a black mark on the eccentric career arc of Josh Brolin (one of the most underrated acting talents working out there right now, with a real gift for morphing himself into roles) and a much-deserved nail in the coffin of Megan Fox’s career (whose lack of talent and, if reports are accurate, graciousness should likely have never taken her past centerfolds). Of course, that begs a couple of questions that are worth asking: 1) Could this movie have been saved? 2) Why did it fail as badly as it did? The answer to #1 is “yes.” The answer to #2 can be found in the material that made this movie even possible.

Jonah Hex was only one of the innumerable cowboy characters who populated DC Comics at one time. But it has to be said that he’s actually of more recent vintage than a good many similar characters that came before him, because he was created in the 1970s. As created, he’s a Confederate veteran of the Civil War who went west and is dodging a bounty on his head. The trademark part of his design is a heavy scar on the right side of his face that make his features as distinctive as any found on Mount Rushmore, though a lot less pretty. Joe R. Lansdale gives credit for Hex’s design to the Clint Eastwood spaghetti westerns, but one look at Hex’s puss should tell anyone who knows Eastwood that The Outlaw Josey Wales was the real root of the look.

Sadly, by the mid-1980s, Hex had become something of a bad joke, stuck in a really dumb post-apocalyptic series with the same name as the movie I just mentioned (Obviously, someone watched the Mad Max movies too many times and came to the wrong conclusions). Then came the 1990s and the Vertigo imprint to the rescue. The trio of Jonah Hex miniseries that followed is as much a part of the history of Vertigo as Hellblazer or Sandman. But then, the writer/artist team of Lansdale and Timothy Truman on all three series also did a lot to keep the quality at a high peak throughout. Today, we’re going to look at the first of those series, Two-Gun Mojo, which was part of the initial Vertigo rollout.

The story itself could be summed up by this pithy line from Hex: “’Course, I’d hoped that things would go a mite smoother. Then again, reckon I always do, and they always don’t.” We start off with Hex getting dragged out to a tree by the Traywick gang for an impromptu hanging, just outside the East Texas town of Mud Creek (or, as Hex puts it, “a little trip through the countryside”). He gets saved from this slow, choking death (after nearly getting killed by a bad shot to the horse that Hex is mounted on) by an old bounty hunter who calls himself “Slow Go Smith.” He’s the world’s worst shot with a gun, but figures if he can keep shooting for long enough, he’ll eventually hit something. Turns out that the Traywicks have a bounty on them, as well, which Hex and Smith go into Mud Creek proper to collect. However, the townsfolk have already shot somebody else that they thought were the Traywicks and so, Hex and Smith are going to have to wait a couple of days to get the money that’s already been spent back.

Do I even need to say that this isn’t how things work out? Smith gets himself shot to death in a barn by a gunman who we later find out is none other than Wild Bill Hickok himself, back from the dead…sort of. See, Bill doesn’t have much of a mind left in him (probably because he left most of his brains back in Deadwood where Jack McCall splattered them on the Number Ten Saloon floor with a point blank .45 round to the head), and he’s being run by one Doc “Cross” Williams, a gabby little man with a bit of occult knowledge under his belt. He runs a medicine show called “the Wagon of Miracles” and keeps a troupe of freaks with him who got altered by the same process that changed Bill. Anybody familiar with Voudon or the Wes Craven flick, The Serpent and the Rainbow, will recognize the formula he’s using. Add a little occult volume called the “Book of Doches” that calls on Lovecraftian “dark ones” and you’ve got some truly weird business.

Still, for all the occult overtones, Lansdale keeps it fairly hazy whether there is real supernatural funny business going on or just some nice logical explanation. As he explains in the intro, this was prompted by his false memories of the original John Abilene stories that he read in the 1970s, which he thought had those elements and turned out not to upon re-reading. The ambiguity as to what may be going on is a real mark in Two-Gun Mojo’s favor. Doc is such a self-important, egocentric prick that what’s really going on doesn’t matter, anyway.

This seems like it’d be a simple tale of pursuit and revenge, right? Not when Lansdale is writing it, it isn’t. Complications, from hanging 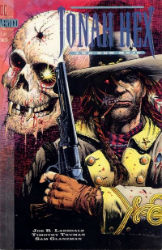 citizens in Mud Creek to Hex being captured and nearly pickled the same way as the rest of the troupe he’s pursuing, to having to declare a temporary truce with Doc so that they can fend off an Apache attack, make sure that nothing about this story runs straight or true. It’s become something of a cliché that the Old West was a chaotic landscape where anything can and did happen. But Lansdale, being a native Texan (supplying the authentic dialect of the region for his characters) and student of history, takes this to a level that the then-contemporary Western, Unforgiven, only really hinted at. Doesn’t matter if it’s people who are trying to help Hex getting killed, getting bushwhacked by Doc Williams, or the aforementioned Apaches…if something can go wrong, it WILL go wrong.

Still, Hex keeps his dark sense of humor about things all the way through. His sarcastic description about his near-hanging in the beginning sets the tone. His bitterness and sense of justice also shine through in all the people he shoots or belts. He still hates Yankees as a matter of principle, but deals with people on a case-by-case basis in terms of treatment. While he doesn’t manage to save one person aside from himself over the course of this story, he does his best to honor those who did their best to help him.

Tim Truman and Sam Glanzman’s artwork, a good deal of it derived from authentic Old West photos, is a perfect complement to the rough-and-tumble story that it’s showing. This is the unprettified version of the West that you won’t see in John Wayne movies or 1950s TV Westerns. It’s a desolate landscape full of dirty people, clapboard shacks, misspelled signs, and a never-ending supply of flies. Texas has some vegetation and a few signs of civilization here and there. But the climax is set in New Mexico, where there’s nothing but rock as far as the eye can see.

Truman’s design of Hex is particularly vivid. He’s constantly clad in his Confederate grays, has red hair (possibly in acknowledgement to Willie Nelson’s classic 1975 concept album The Red-Headed Stranger), and a scar that makes him look as horrific as Two-Face on his right side. The running gag of this series is the number of explanations that Hex has for the scar (ranging from “Cut myself shaving” to “Damn chigger bite”).

Reading this story is enough to make one think of Hex and wonder, “What if?” What if the filmmakers had actually hired Lansdale for their screenwriter (He has a credit as one for the indie film, Bubba Ho-tep)? What if they’d actually taken the time to look over the source material and write a screenplay that truly honored it? What if they’d stopped ogling Megan Fox long enough to realize that her acting chops are somewhere along the lines of nonexistent? Okay, that last one doesn’t have anything to do with what I’m talking about, but still….

Anyway…as things stand, we’ll probably have to wait 20 years before these people try again with the material. Much like what happened with Dredd, I expect that they’ll still not get it right.

You can order Jonah Hex: Two-Gun Mojo from Amazon.com.