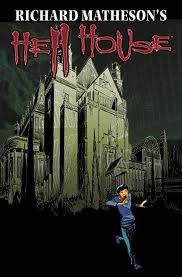 Richard Matheson is one of those writers whom you may not realise you’ve seen in action until you start listing off his bibliography. For starters, he was one of three writers to have been the main scenarists for the original Twilight Zone TV series (the other two being Rod Serling and Charles Beaumont), scribe of such memorable episodes as “Third From The Sun”, “Death Ship” and “The Invaders”. His novels have become pop culture touchstones, whether one is talking about I Am Legend (adapted no less than three times for film), The Shrinking Man (add the adjective “Incredible” and you’ve got the movie of the same name, which Matheson himself adapted for the screen) and Somewhere In Time (originally entitled Bid Time Return until Matheson adapted it for the more-famous film starring a pre-Superman Christopher Reeves and a post-James Bond Jane Seymour).

Never picked up any of those books or watched the film adaptations? No problem! If you’re enough of a connoisseur of classic television, you might recognise him as the genius screenwriter behind the original pair of Kolchak TV Movies (The Night Stalker and The Night Strangler) as well as one of the most notable adaptations of Dracula starring Jack Palance (which could arguably have been one of the biggest influences upon the 1990s Francis Ford Coppola version). Then there are some of Roger Corman’s Poe film adaptations (Fall of the House of Usher, The Pit and the Pendulum), a pair of films that got adapted from his books in the 1990s (What Dreams May Come – FYI, the book was much better – and Stir of Echoes), and Matheson’s contribution to the haunted house genre in the 1970s, The Legend of Hell House. Today’s topic will be the latter’s source material adapted to the medium of comics, simply known as Hell House.

It’s December 1970. William Reinhardt Deutsch, a wealthy industrialist, is on his deathbed with more money than time left. So, he decides to put his vast pile of money towards a final ambitious project: definitive proof that the afterlife either exists or does not exist. He personally doesn’t care what the answer is. All he wants is a definite answer either way (recalling Max Von Sydow’s inquisitive knight in Ingmar Bergman’s The Seventh Seal) and he puts together a team to go into the one place where the answer is likely to lie: the Belasco House AKA “Hell House”.

The team itself is an odd mixture that is meant to cover all the possible angles. First, we have Dr. Lionel Barrett, a physicist/parapsychologist who’s been crippled by polio and has hard-headed views on supernatural phenomena being just science that no one has figured out yet. With reluctance, he takes along his wife, Edith, who gives the impression of having had to endure years of sexual repression due to her husband’s condition. On the other side of the scale, we have Sister Florence Tanner, a New Age psychic and mental medium whose beauty Edith finds intimidating. This Christian mystic has views on the spiritual nature of supernatural phenomena that is the equal of Barrett’s in terms of pig-headedness. Her counterbalance is Benjamin Franklin Fischer, the sole survivor of the previous expedition to Hell House, whose prodigious psychic gifts as a physical medium (evident ever since he was 12) have been severely curtailed in the wake of that tragedy. Of all of them, he has the best idea of what is waiting for them inside…and almost none of them listen to his warnings until it is far too late.

The theme of this story is one that’s as old as Greek myth: hubris. This mostly manifests in the conflict between Barrett and Tanner, both of whom are absolutely convinced that they have the answer to what is going on inside. All either one of them is waiting for is proof…or, rather, they take the evidence that they find and twist it so that it becomes the proof for their own pet theories. This recalcitrance makes them ripe prey for the house’s tricks as it worms its way into the fissures of their own psyches. In contrast to that, Fischer has already paid a high price for his own hubris of times past and is looking for a way to atone for his mistake. Only Edith can truly be called innocent of this tendency and, in many ways, she is probably the most victimised member of the team because of that. Even the final revelations of the true nature of the haunting speak of yet more hubris at work.

The horrors of the house are fairly subtle. One suspects that Matheson took his cue from actual reports of hauntings and Ian Edgington’s script does an admirable job of staying faithful to the original book’s spirit (so to speak). The phenomena are restricted to moving objects, possessions, psychokinesis, and the occasional frightening set of visions. Whatever the hyperbole of the chapter header paintings, Edgington opts for a more low-key approach. As Fischer recounts the history of the house and its owner, Emeric Belasco (which is a fairly debauched account of degradation that is the equal to Lord of the Flies and 120 Days of Sodom), all we see are shots of various rooms of the house in the present. The words themselves convey the ugliness of what has happened here and just looking at the placid interior shots makes the readers’ minds fill in the imagery blanks. It is an effect comparable to that of old radio programs and Edgington deserves credit for using it to such great effect.

Simon Fraser does an equally excellent job with the black-and-white artwork of the piece. He accurately captures the spirit of the 1970s in the early scenes while doing a workman’s job on conveying the eerie stillness of Belasco House for most of the story. Nor does he skimp when the time comes to witness some truly horrible things, which smack the reader in the face at the moments when they’re not looking for them. But the most horrible sights are the possessions, which bring to the surface an ugliness of the soul that Fraser goes out of his way to make repellant.

No adaptation of Hell House would be complete without me at least alluding to the final act. This section has often been criticised as being so full of scientific mumbo-jumbo that it drowns out the horror of what we have seen. While I see the point about it killing momentum, it would also behoove us to consider the source of said mumbo-jumbo: none other than Dr. Barrett. By this point, he has gone a long way towards establishing himself as an unreliable over-rationaliser who is just asking for the sucker punch that hits him shortly thereafter. It does take the wind out of the sails of the horrors that we have seen a bit, but my impression is that Matheson was doing his best to apply the prybar of science to codify age-old legends in much the same way that he did in I Am Legend with vampires, Stir of Echoes with psychic powers, and What Dreams May Come with the afterlife (I say again…the book was much better, so please read it and skip the movie).

There are flashier, better-known writers out there, but, too often, they tend to drown out the good ones that still walk among us (as of this writing, Matheson is the only member of the aforementioned Twilight Zone trio who is still alive). Don’t like reading prose? Not in the mood for a movie? Then try this adaptation on for size and see if it doesn’t whet your appetite for more from one of the great underacknowledged masters of the form.

You can find Richard Matheson’s Hell House on Amazon.com.