Children know the truth.
Love is not an emotion.
Love is behavior.” – Andrew Vachss

What is life?/What’s beyond? – Jon Schaefer of Iced Earth, “Frankenstein” 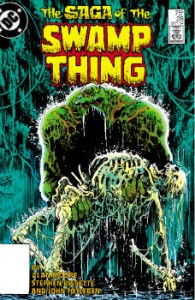 [dropcap]W[/dropcap]elcome back to the acclaimed Alan Moore run on Saga of the Swamp Thing. When we last left our hero, he’d just managed to come out on top of a fight with a demon called the “Monkey King.” But all is not well, as Etrigan the Demon warned him and Abby Cable before taking off. Abby’s husband, Matt, has just managed to make a deal that is going to cause most of the chaos in this volume.

But first things first. Last time, it was made plain to the Swamp Thing that he is not, contrary to what everyone has assumed for all these years, the deceased Dr. Alec Holland (though Abby and Matt still insist on calling him “Alec”) but … something else. That particularly paradoxical truth is what drives the opening story of this round, “The Burial” (ably illustrated by guest artist Shawn McManus). Some of you of a certain age may recall the original Stephen Bissette/John Totleban cover for this story, the Swamp Thing holding a skeleton in his arms. It is an oddly poignant image that matches the story it is attached to and one I have never forgotten.

The Swamp Thing sees Alec Holland’s ghost in the swamps, beckoning him to follow. We and our mossy protagonist are eventually led to the original barn that created him, where the Swamp Thing watches scenes from Alec’s life replay, including his death and rebirth (much of this is derived from the Len Wein/Bernie Wrightson origin story). This leads to the Swamp Thing doing one of the damnedest funerals in the history of fiction.

From there, we jump straight into the main storyline of “Love and Death,” a story that violated the Comics Code on so many levels that DC opted to simply publish these issues without code approval. Moore claimed ignorance about the Code’s restrictions (which were nutty in the extreme when you look at them), but I’m not buying it. He knew perfectly well what he was doing with this story and just wanted to see if he could get away with it. And he did.

Ahh, but I’m stalling. I should get to the story itself. We open with Abby in the aftermath of a cleaning frenzy, the object of which was herself. I should mention that she opted to use certain chemicals and implements that should never be used on human skin. See, she’s just figured out what’s really been going on for the last few days with Matt. Apparently leaving the alcohol behind entirely, he has three surprises for Abby.

The first is a new house, a nice, little plantation-style affair that he has no business affording. The second is a new job for himself, working at a company called “Blackwater Restorations” (I should mention that this was published some twenty years before the Blackwater mercenaries entered the public consciousness), a company that has a familiar face in it that Abby later finds in a book about a serial killer. The third surprise, well, that was something he never got around to telling Abby. It involves Abby’s uncle Anton Arcane, a sorcerer/scientist who can’t seem to stay dead. Her figuring out the connection between Matt and Arcane is why she does what she does at the top of the story.

As bad as the last volume’s horrors were, this was the moment that Moore cranked the real horror volume up to 11 and just cut loose. The rotting corpses on display were certainly nothing new for comics, as the original EC line can attest, but that’s the least of it. This story winds through an apocalypse that covers such uneasy topics as incest, evil coming back to the planet, and vengeance from beyond the grave. In the end, nobody comes out a winner, especially the Cables. Matt winds up in a long-delayed coma and Abby’s soul is lost to the other side.

The preceding is the setup for my favorite story in the whole volume, “Down Amongst the Dead Men,” a reworking of Dante Alighieri’s Divine Comedy. As mentioned, Abby’s soul is gone, but her body still breathes. The Swamp Thing is determined to find her on the other side and works out a way to pierce the veil of death itself. Of course, like Dante, our mossy leading man is going to need a guide for this kind of landscape. Thankfully, he winds up getting three.

First, he runs into Boston Brand AKA Deadman, a one-time trapeze artist who’s been spending his afterlife as a ghost with a talent for possessing human bodies. He guides the Swamp Thing through the barren realms of the newly-dead, which only have the notable feature of poltergeists feeding on raw emotions from the material side of reality.

Next, the Phantom Stranger, a mystic of undetermined origins who lives up to the name, takes the Swamp Thing through Heaven, where the real Alec Holland gets a chance to thank his alter ego for saving him from being trapped on Earth. Finding no Abby there, the Stranger guides the Swamp Thing past the Spectre (usually depicted as a wreaker of righteous vengeance, but depicted here as a sort of Yog-Sothoth figure in being the gate, the key to the gate, and the guardian of the gate between Heaven and Hell) to the gates of Hell itself.

This prompts Etrigan the Demon to make a reappearance to guide the Swamp Thing through Hell proper (for the small fee of a flower that the Stranger picked from the slopes of Heaven). Etrigan as a character talks in nothing but rhymes and waxes the most poetic of all the Swamp Thing’s guides. His explanation of Hell and why it exists is likely one of the best pieces of prose poetry ever written. Deceased evildoers like General Sunderland (who now polishes the hooves of a demon with his severed tongue) and Arcane (who is subjected to the disgusting punishment of having his body be a breeder of flies) are down here – and so is Abby. Without going into too many more details, I’ll just say that everything wraps up with one of the few indisputably happy endings that this series ever saw.

The final three sections of the volume are each separate entities. The first (and, to my mind, weakest) is “Pogo,” a tale that was inspired by a Wally Wood comic that most people have never heard of and utilizes odd turns of phrase that some readers may find charming, but I found annoying.

The second portion, “Abandoned House,” finds Abby, through the auspices of her dreams, meeting Cain and Abel (yes, THAT Cain and Abel, as is demonstrated towards the close of our tale), proprietors of the House of Mystery and House of Secrets, respectively (They both happened to be the hosts of the comics of the same name back in the 1970s). This story is important for a pair of reasons. First, it manages to tie the original Swamp Thing story by Len Wein and Bernie Wrightson in with this particular incarnation (and hints at the upcoming troubles for our mossy defender). Second, it proves to be the first cornerstone of the Dreaming that Neil Gaiman would later expand upon in his Sandman series half a decade later.

As Alec himself puts it, Abby needs more than just the “taste of lime” (a result of her kissing him) to fulfill her needs. He has her eat one of the tubers growing on him, which has the effect of absorbing a piece of his consciousness of the rest of the natural world that he spent the previous storylines reconnecting to. It becomes like a psychedelic love song in terms of the imagery and text, lyrics by Emily Dickinson, with imagery and music by Jimi Hendrix. For some, it may not be compelling enough to call truly bold, but the imagery and feel of the pages are undeniable, and nothing like it was being done in comics at the time.

Readers could understandably stop there and be done with the whole story, thinking that’s a wrap. But remember what I said about Abby having that dream of more trouble coming? That will be the subject of a future column entry, a storyline that ran under the overarching title of “American Gothic.”