This story takes place in one of those parallel worlds where a bullet was not fired in Texas in 1937 and so the world was changed….

[dropcap]T[/dropcap]hat bullet was actually fired in 1936, June 11th to be precise. The bullet was from a .380 Colt Automatic. It didn’t belong to the shooter. He’d borrowed it from a friend, who 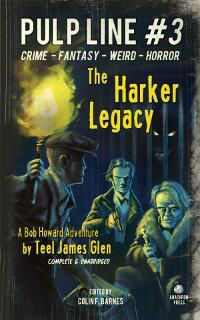 would go on to regret the loan. The shooting took place in the small town of Cross Plains at the family residence of an old country doctor. His wife had lapsed into a coma she was never waking up from. They had one surviving son between them, the other being that son’s twin brother who was stillborn.

Their boy grew up to be a man of great literary ability and brooding persona, creating worlds and characters that would go on to become staples of late 20th century fantasy. Locals treated him as something of the town freak (though not too much, once he took up boxing and got his full growth) even though he was able to buy a brand-new car in cash at the height of the Great Depression. This son, Robert Erwin Howard, was both the shooter and the victim of that bullet. Many literary tributes have come along since that untimely demise, but Teel James Glenn’s The Harker Legacy should justly stand as one of the most original. In terms of plot, it reads like the greatest Hammer Horror film never made.

It’s now 1938. Bob (as Howard was usually known by) has managed to pull himself out of the suicidal tailspin that claimed his life in our part of the multiverse. Using the meager inheritance that he got from his mother’s death, he’s currently in the middle of a tour of England, a place he is very well-read on (thanks to devouring every book he could get his hands on back home in Texas), but never been to.

His need for some beer lands him in a London pub on the East End that attracts some local trouble. Bob has to make a fight of it, but he’s aided in this by a guy he met at the bar: William Henry Pratt (better known in our reality by his stage name, Boris Karloff). They manage to fight off their attackers, but William’s old injuries that he acquired as a lumberjack in Canada are aggravated as a result. Considering he’s the resident whipper-in of a small English estate, this is a bit problematic.

Without hesitation and over many protests, Bob insists on taking over William’s duties. This impulsive gesture of goodwill sets him on a collision course with a monster connected to William’s employers: Jonathan and Wilhelmina Harker. If the names sound familiar, you’re thinking of the right literary reference.

There is so much to praise about this novella. The sheer economy in which it unfolds is a marvel. As was true of the stories written by its protagonist, The Harker Legacy features minimal words, breakneck pacing, and excellent, non-clichéd characters throughout.

Of course, when you’ve got a real-life character like REH for your hero, you’re off to a good start. Mr. Glenn captures Howard’s dominant and documented characteristics: his iron code of honor, brooding pessimism about civilization, skill as a boxer, self-taught knowledge of many historical subjects, and shyness around women. He also manages to make much of how this Texan pulp writer is a two-fisted oddity in pre-WWII England, whether he’s complaining about the warm beer or reminding the locals that nobody calls a Texan “Yank.”

The inclusion of an alternate universe Karloff who left Hollywood behind after either The Mummy or Son of Frankenstein is inspired casting, if you’ll forgive the phrase. The two men were actually very similar in background. Both grew up dirt-poor, had an interest in the arts that wasn’t shared by their immediate areas, and worked to achieve everything they had. Nor are the ethics ascribed to William in the text an exaggeration. In this universe, he became something of a reformer for the dangerous conditions that many actors had to toil under in the 1930s. A change of scenery would do little to alter that.

The Harkers, on the other hand, are anything but what you would expect. Jonathan and Mina are barely recognizable, having gone from your typical middle-class couple at the turn of the 20th century to a pair of poseurs with pretensions of minor English nobility. Without giving away the plot, I will say that the reader is likely going to wind up really hating the Harkers by the time this is over.

They have a son, Quincey (so named for another Texan from Stoker’s novel who has recently passed away), who seems to embody the worst traits of the typical spoiled child. His sister Gwendolyn is a veritable angel in Bob’s eyes with her kindness towards him. Events in the story will prove that he’s not far wrong, while giving the rest of us who know Howard’s work flashbacks to Belit and Sonja of the Red Brotherhood.

There are plenty of sly, indirect references to Howard’s work throughout, whether it’s Nameless Cults on Jonathan Harker’s library shelf, Howard being stripped naked when he gets captured, or a chapter entitled “With Fang and Spear” (a reference to the very first short story he ever sold). But those are merely easter eggs for the fans. Mr. Glenn made the excellent choice of making knowledge of any of his source material optional, resisting a temptation that can and does ensnare other writers (Yes, Brian Lumley, I’m looking at you).

Still, for those who know the novel, Dracula, there is a certain satisfaction in having the late Quincy Morris’ Bowie knife come out of its case to perform one more monster slaying.

The game of “what if” is any writer’s basic building block, but few writers take it to the point of doing this sort of mixing of historical and literary sources. For every Max Allan Collins or Harry Turtledove, there are probably at least a dozen literary Icaruses who got their wings singed to the point of going for a crash landing. Then there’s the fact that the story is usually a full-fledged novel or series of them, stretching it out for as long as possible. But the mere 63 pages of this gem should be an important signpost to anyone who actually wants to do this sort of thing right. Highly recommended!