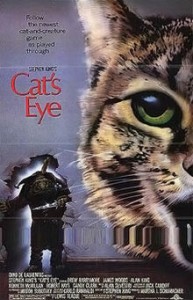 Some 80s horror film soundtracks are difficult to find. And if you do find them, you might have to settle for buying them in a format that you can’t utilise. I can’t utilise vinyl at present, so listening to the complete soundtrack of Cat’s Eye is out for me. I had to settle for the resourcefulness of iTunes to scrape together a makeshift musical quatrain of this demented, hilarious film’s excellent soundtrack.

Track #1: “Stephen King’s Cat’s Eye Suite” by Alan Silvestri. This suite does not have the cheesy, mock-hero music written for the cat in the story and this omission is fine with me. The mock-heroic theme was one thing that bothered me in this movie. The suite keeps just the erratically echoing, fast, synthesised ambience of the score with its harsh orchestral hits and heavy electronic base. The suite’s erratic sound effects were most likely achieved by the musician selecting a tremolo function on a standard Yamaha keyboard and then holding a finger down on the keys for a prolonged time, allowing the tremolo effect to reverberate. It’s an edgy, unnerving and really cool effect, and makes for great running music. This suite is the only part of Cat’s Eye‘s orchestral score (not the songs) that is available through iTunes.

Track #2: “Every Breath You Take” by The Police. The party scene where this song is played is the funniest part of the film. James Wood’s plays a man struggling to quit smoking. If he lights up, he welcomes a Mafioso to do unspeakable things to his family. The Mafioso is present at the party, as well as an annoying friend. Woods imagines that both men are bearing obscene amounts of cigarettes and smoke. They are “watching” him to see if he fails. This sick, hilarious scene really does have to be seen to be believed, and you’ll never hear “Every Breath You Take” without thinking about cigarette packs with sexy legs and silver jumpsuits, again.

Track #3: “Twist and Shout” by The Isley Brothers. What song could better accompany a cat on a hot tin electrocution grid than this one? Don’t worry. It’s not quite as grisly as it sounds and, anyway, the cat’s the hero of this film, so he survives. But in this scene, the cat dancing in pain in sync with this song serves as an example to James Wood’s character of what the Mafioso will do to Woods’s family if he doesn’t quit smoking. “Twist and Shout” represents the best of what The Isley Brothers had to offer as a musical group: high energy, powerful vocals, great tempo, and superb instrumentation. A classic song for any decade.

Track #4: “96 Tears” by ? and the Mysterians. Some songs have an infectiousness that is mysterious. They have a little something that demands – and receives – respect from the listener without the listener really knowing why. This song is such a song. It scintillates with rawness and unpolished power. It is a keystone in garage band rock. For people who write music for their own purposes, this song is a blessing because it is a song that was very organically written without interference from the business side of music. It is a manifestation of the dream of all musicians: the dream that some musical scrap written blindly might actually mean something to someone some day. I wasn’t surprised to find out, while I was looking for it on iTunes, that there were so many different versions of the song. It’s been covered a lot and I’m guessing a lot of those coverers feel that same mysterious, inexplicable respect and love for the song. The organ in this song reminds me a little of The Doors song, “Light my Fire”, though I much prefer “96 Tears”.

Selections of Cat’s Eye‘s soundtrack are available through iTunes. You can find the original vinyl album score on Amazon.com.