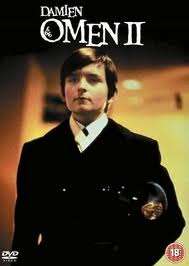 This soundtrack is divided into two different parts. It includes the film versions of the cues and the original recording demos.

Main Titles (Film Version): This track nicely showcases Goldsmith’s use of a synthesizer with a traditional orchestra to give these titles a seamless blend of traditional and modern essence.

“Face of the Antichrist”: The guttural intro spliced with percussion makes this cue strange and uneasy. This type of intro is also a part of several over cues, including “Aunt Marion’s Visitor”.

“Fallen Temple”: Rarely have I heard synthesizers enhance a track as powerfully as this one. The angry chanting beginning at :45 differs from other tracks that have chanting because of an underlining of male voices that sound monotonous next to the melodic female voices.

“Aunt Marion’s Visitor”: The brass in this brief cue is mocking and awful.

“Another Thorn”: After 28 seconds of brash, loud horror, this piece trails off into a spooky suspense cue that leaves the listener pondering what direction the horror will go in next.

“A Ravenous Killing”: At 1:30, this cue evokes the performance music in “Mrs. Baylock” from the first Omen film. The music accompanying Baylock’s attempt to kill Robert Thorn while trying to defend Damien is one of the most chilling moments in the first Omen film and this cue does much to capture that original evil.

“Snowmobiles”: This cue has an intro that evokes the familial theme of the first film. This is as close as we get, in this follow-up score, to that lovely piece. A little beauty for contrast to the horror.

“Broken Ice”: Lew Ayres’s death in the film required a cue that evoked the helplessness of the onlookers as they watch him drown in the frozen water after he falls through the ice while playing hockey. At 2:00 minutes, the frenzied orchestra quiets to a solemn elegy as William Holden falls to his knees, crushed with grief.

“Number of the Beast”: Damien discovers his birthmark and makes a mad dash from his military school to a deserted pier. He lingers at the edge of the pier and screams forlornly at the world, wondering why he is the Antichrist. This cue enhances Jonathan Scott-Taylor’s awkward performance. Taylor’s performance isn’t poor, but his self-conscious stance detracts from the horror. The music makes up for the awkwardness with a sheer bolt of anguish.

“Shafted”: A quiet cue in the soundtrack. It’s slightly shorter than the original demo.

“The Daggers”: Will Damien ever meet the daggers crafted for him? Not in this film.

“Thoughtful Night”: At 1:37, the synthesizer is cued again and makes the music sound awful.

“I Love You, Mark”: This cue accompanies my favourite scene in this film. Damien decides to allow the forces of darkness to claim his cousin Mark when Mark discovers Damien’s true origin. Mark becomes a sacrifice. This scene has a nice Cain-and-Abel tone. “Nice” in the sense that it’s heavy in biblical overtones.

“The Boy Has to Die”: The constant underpinning of whispering that accompanies the main chanting always makes this score sound more malevolent.

“All the Power and End Titles”: These end titles differ from the first Omen‘s titles without deviating from them, and losing all the original power and majesty of this frightening score. The synthesizer returns at 36 seconds. I couldn’t hear these titles without it.

“Main Titles”: These were longer than the titles actually used. The synthesizer is downplayed somewhat in the beginning. The spooky shift from loud to quiet at 3:00 minutes into the track gives some uneasy suspense. The chanting lives up to the operatic standard set by the first score.

“Runaway Train”: This utilises ghostly chanting. The scary track gets more frenzied towards the end.

“Claws”: Goldsmith meshes many themes from the first Omen together in this piece.

“Thoughtful Night”: Woodwinds have a pensive sound to them. They give this piece a meditative quality.

“Broken Ice”: This demo has a different intro that sounds dizzying. I’m glad this was cut from the film version.

“Fallen Temple”: The organ at five seconds into the piece is downplayed more than the one used in the film version. Yet, it has a crisp sound that makes it an interesting comparison to the final product.

“I Love You, Mark”: This demo lacks some of the dramatic pathos of the final product.

“The Knife”: The original impetus for “The Daggers”. The two pieces differ more than any other demo and finished product.

“All the Power”: The synthesizer isn’t cued until 46 seconds in. The longer buildup was shortened nicely in the finished product.