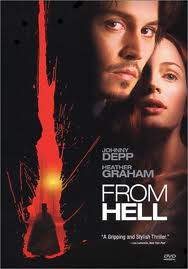 This film is a tough one to figure out as far as deciding whether or not it’s entertaining or dull. It will probably bore seasoned “Ripperologists” because they’ve heard most of the theories about the Ripper’s identity. Out of all the theories there are to choose from, these filmmakers went with the one that makes as much sense as cat litter pancake mix. As wrong as this theory is, it is not quite wrong enough, which is why it can carry the film and the soundtrack.

“The Nobodies”: The only pop song on the soundtrack. Performed by Marilyn Manson, this piece is at odds with the rest of the orchestral score. It’s ironic that it’s about “nobodies”, since the victims of Jack the Ripper really didn’t have any bodies after the Ripper was through rearranging their physical forms to better suit his psychopathic needs.

“In Memoriam”: At 3:07, male choral vocalists start singing and give this piece the feeling of an ancient funerary dirge. The frenzied strings at 4:27 owe a debt to Jerry Goldsmith’s score for Damien: Omen II because the two string sets sound very much alike in performance. Most every score that utilises scary plainsong chanting and demonic horns owes a debt to The Omen scores.

“Royal Connections”: This is a dreary cue. There’s no pomp and circumstance contained in its bars.

“A Sprig of Red Grapes”: A cue dedicated to all social climbers, rich, or poor, because, in a horror movie, all social ladders lead to shapeless, omnipresent horror.

“Whitechapel Murders”: The dirge feel of “In Memoriam” makes another visceral auditory footprint in this cue. This one bores me and makes me wish there was a soundtrack recording of Biography‘s “Jack the Ripper”, instead. Still, it’s effective in musically dramatising the grim conditions of the Whitechapel district that served as the Ripper’s hunting ground.

“Chasing the Dragon”: I think too much is made of Detective Aberline’s addiction to absinthe in this film. I don’t know the point of this angle, except to heighten his intuitive abilities. I found this cue painful to listen to because it is repetitive from earlier cues and too slow in its buildup to feel suspenseful.

“Portrait of a Prince”: The previous two cues bored me, but this cue is gorgeous. That’s the odd thing about this score: The beautiful music is more interesting and powerful than any of the music cued for the suspenseful moments in the film. The most powerful moments of this score rely on its beauty, not its suspense. That’s an interesting type of musical evocation for a horror film.

“The Compass and the Ruler”: The beginning of this track sounds like it’s being played on a phonograph, which gives it an old-time feel that is appropriate for the period. It’s dreary and bleak. The brash dissonance at 3:48 gives a very unnerving moment in the piece. In the film, this cue is contrasted nicely with the disturbing shots of rare, bloody steak being cut for the Ripper’s meal, just before he heads out for the night.

“Marylebone Workhouse”: This piece begins as relaxing and descends into suspense after two minutes into it. Very Victorian in its disturbing dichotomy of calm and hysteria.

“Investigation”: Moody, tight, but not much pith. More of a standard cue than a shattering one.

“Death Coach”: A scary cue that is perfect for evoking a haunted house, haunted streets, or a haunted mind.

“Pennies for the Ferryman”: Very spooky cue that is also tragically beautiful. At 1:38, the beautiful, lush theme heard in its ornate entirety in “Portrait of a Prince”, is heard again. At 3:12, this theme is orchestrated with a lullaby type of instrumentation that is heart-breaking. The lone violin at 4:18 is equally haunting and tragic. The building crescendo at 5:19 ends with a lone female choral voice echoing in the distance. It’s always amazed me how a good score can evoke the sense of distance, even if you’re listening to it right next to the speakers.

“Bow Belle”: Another cue played like a phonograph recording. This time, sounding like its playing underwater. The pipes are bright and the distorted singing is really disturbing, even though the music sounds bright and happy.

From Hell‘s skewering, moody, soundtrack is available at Amazon.com.