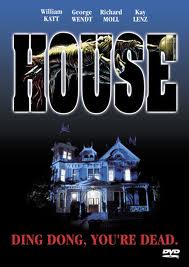 Much of the film crew responsible for the slasher rampage in the Friday the 13th saga were also responsible for making this low-budget, classy little horror flick that greeted audiences in 1986. Harry Manfredini, scorist of the Friday the 13th films, also wrote the music to this film. House‘s soundtrack is, unfortunately, difficult to purchase because of its limited demand and distribution. Your best bet is to snag a copy of the DVD from Amazon. This film’s use of the score is notable for the fact that it uses Manfredini’s music effectively and the score doesn’t clash with any dialogue or action in the film. It’s synched well with all parts of the film that would be silent, otherwise. Happily, the two pop songs included in the film that were not written by Manfredini, and are not available on the soundtrack, are available in easily accessible venues like iTunes and Amazon.

“You’re No Good”: Written by songwriter Clint Ballard Jr., it mystified me for a while which version of this song was used in House. If this information was in the fine print of the credits at the end, I couldn’t see it. I know that the “famous” version was sung by Linda Ronstadt. I’m not too familiar with Ronstadt’s voice, but I was certain that the singer in the House version of this song was not her. A little research informed me that this song was originally sung by Dee Dee Warwick. She, too, was not the mysterious singer in House. Finally, I found that there was a second version of this song released in 1963, the same year as Warwick’s original recording. This R&B version was sung by Betty Everett. Bingo. After listening to all three versions, I concur with the choice made by the film crew of House to use Everett’s version. It has a saucy construction that feels more energizing than Ronstadt’s and is smoother than Warwick’s.

I can’t leave the topic of this song in House without discussing its context in the film. I’ll try to gloss over the gory details. William Katt’s character, Roger Cobb, is a struggling, divorced horror writer battling with apparitions of his zombified memories in a home he inherited from his aunt. This song is cued at the moment he finally puts to rest his guilt over his crumbled marriage: puts it to rest with a pair of hedge clippers, trash bags, an axe, a shovel, and a lot of holes dug in his front yard. I think any horror writer can enjoy some dark humor and maybe even a little empathetic catharsis from watching this scene. Writing is tough. Especially when the writer is contending with memories that won’t die. In the case of House, Cobb systematically did battle with zombified memories, one by one, and won.

“Dedicated to the One I Love:” Written by Lowman Pauling and Ralph Bass and performed by The Shirelles, this song was originally performed by The “5” Royales, the band that Pauling and Bass belonged to at the time they wrote the song. However, it’s The Shirelles’ version that is used in House. This song quickly follows up “You’re No Good” in the film with another bolt of morbid humor.

As for Manfredini’s actual House score, the opening titles are the fullest showcase for its suspense. They lack most of the techno effects of Friday the 13th Part III, which is a memorable and fun score of the Jason Voorhees franchise and the Manfredini score I was most familiar with until seeing House.

I’ve never been off put by Manfredini’s copious use of synth strings, even though they can be a little annoying in some cues of both F13 P3, and House. I think that annoying aspect contributes to the morbid humor of both films. Both films are about monsters but monsters that make it clear they have a point to make and they’re going to make it.

Overall, I wasn’t impressed enough with the House score to go on a mad buying dash for the original soundtrack, but I want to acknowledge that Manfredini showcased cello, synth strings, and comedic brass well in the film. If any readers of this article do own the vinyl soundtrack and find that I’ve made any continuity errors in my following cue rundown, I urge you to correct me by leaving a comment detailing pertinent information that might have eluded me during my viewings of this film.

And now, on to the rundown:

In “The Abduction,” we get a listen to the cue used to elicit the disappearance of Roger’s son.

“Hey Rog!” is a departure from horror into comedic brass.

“A Fiery SandyWitch” is a piece that foreshadows “You’re No Good.”

“2nd Hand”: I love it when cue titles have several corny interpretations.

“Viet Memories/The Chimney”: The most bizarre zombies in the film are two bratty boy and girl monsters that live in Roger’s chimney. These apparitions do not match any of Roger’s memories, so their presence in the film is perplexing. So is this cue.

“Big Ben Chase”: Who knew that a Night Court alumnus could play a malicious, vindictive lunatic? With horror film music, anything is possible.

“Cujo the Raccoon”: That’s it, Roger. Just babble your buns off about zombies actually being raccoons nesting in your closet and neighbors will be flocking to help kill your zombified memories for you. More annoying synth strings, please.

“Viet Rescue”: I imagine that heroic music will always be a little flat when the vanquished antagonist is a Night Court alumnus.

“TransparAuntie”: If this cue is the one I think it is – when Roger’s aunt Elizabeth decides to take a game of “Hangman” too seriously – then it’s placed out of order on the soundtrack.

“Roger Gets a Hand”: When Roger finds he is no longer afraid of Ben, the music is slow and more tranquil than it is in most of the film.

Roger Gets a Hand 2: Hero music is not always heroic, but this one tries.

House‘s DVD is available here. For those interested in purchasing the original soundtrack, the only place I could locate it was here. Otherwise, I reiterate that your best bet is to pick up a copy of the film.
The two pop songs, “You’re No Good” and “Dedicated to the One I Love,” can be found at: www.apple.com/itunes/.