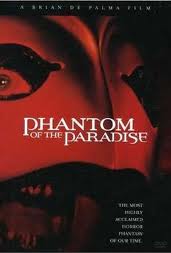 As time has gone by, I’ve become convinced that this wild, comic-strip-like homage to various horror film classics, from Psycho to Frankenstein, is the definitive film version of Phantom of the Opera. I’ve seen various film versions of this story and have found a beef in all of them. But never one quite like this.

Director Brian De Palma utilizes satire in this film well. What’s scary about his satirical version of this story is that his satire cuts a more realistic picture than anyone is expecting while watching this film. With all its absurdity, there is jagged truth that shouldn’t be digested any way except in a wild fantasy film. The jagged truth is about the pursuit of self-actualization and all the obstacles that will stand in its way.

This soundtrack only contains the main numbers from the film. Little ditties and instrumental music are omitted, unfortunately. Perhaps there will be a re-release someday.

“Goodbye, Eddie, Goodbye”: It’s too bad that the soundtrack doesn’t have much of the instrumental music included. All it has are the main pop numbers. This one is sung by Swan’s fictitious band, The Juicy Fruits. It’s pretty neat when songs have a little spoken story within their bars and this one has an appropriately corny little ditty about the singer, Eddie, publicizing his own demise in order to promote his rock album.

“Faust”: William Finley played Winslow Leech: the man who would go on to be the Phantom in this version of the story. Finley, sadly, passed away earlier this year. This song is the only one on the soundtrack sung by Finley, himself. It was really cool to me to hear that he had a nice voice, in addition to being a good actor. Some of this song I don’t like so much, but the last verse is really beautiful. My favorite line: “Old emotions. May they rest in peace.”

“Upholstery”: Wow. I’m not into cars (unless they’re roaring she-demons like Stephen King’s Christine.), so this has to be a good song for me to like it. And, for some reason, I do. The film credits the singers as “The Beach Bums.” They’re a lot of fun as caricatures of The Beach Boys, just as The Juicy Fruits were fun caricatures of 1950s rock bands like Dion and the Belmonts. Both bands are played by the same actors.

“Special to Me”: I find this song to be sad when taken in the context of the film. It’s the audition number of Phoenix, the girl Leech wants to have the lead role in his cantata. Swan assures Leech he’ll hire her. As with all things with Swan, it’s for his purposes.

“Phantom’s Theme (Beauty and the Beast)”: A sort of “choose your treachery” theme. In the case of Winslow, he refuses to choose treachery in this film and is punished by Swan mercilessly for it. Paul Williams (Swan) sings this song beautifully.

“Somebody Super Like You”: This song is sung by the same trio that made up The Juicy Fruits and The Beach Bums. Now they are The Undead. It acts as a prelude to one of the greatest characters in this film: Beef. Beef is hired as a substitute singer by Swan after Swan already promised the lead to Phoenix.

“Life at Last”: And cue…Beef. Sung with charisma, style and flamboyancy that is beyond the edge of cool.

“Old Souls”: Sung by Phoenix. I’m impressed with Jessica Harper’s vocal ability. She had a powerful voice that made her a more self-assured version of the “Christine” figure than in other versions of Gaston Leroux’s original story.

“Faust”: Paul Williams takes a turn singing in William Finley’s place in this jazzier version of the song.

“The Hell of It”: Paul Williams’ lyrics in this number are scathingly insulting. They are also ambiguous. Whom is this song insulting? Maybe the Undead have the answer.

Phantom of the Paradise’s soundtrack is essential for camp-movie fans and can be found at http://www.amazon.com/dp/B0000072VT/?tag=innsfreepres-20