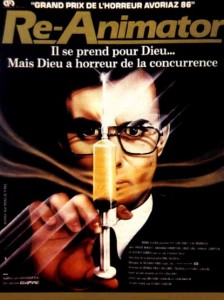 Bride of Re-Animator‘s soundtrack is a challenge to obtain but worth the effort. It was still available on Amazon, last I checked and at the time I wrote this review, but it’s going fast. I snagged the last mint condition copy presently available, which is a merged edition of both Re-Animator and Bride of Re-Animator‘s soundtracks. It isn’t a wonder it’s going, going, soon to be gone: It’s a beauty. It is as simple as that. It’s more easy-going than the music of the first Re-Animator‘s score. It also sees the return of my favourite music from the first film in the cue “The Body Parts Room”. I love that piece quite a bit, since it is full of sagely dark humour.

Much of the Psycho score connotation has been dropped in favour of a more-ethereal, more-relaxing score. For a horror score, there’s a lot of tranquility in its notes because of the slower themes for the Bride. There are still moments of suspense, but the suspense is more in the lines of campy sass. It is always nice to hear music that is suspenseful in a not-too-serious way. Go to the local grocery market, if you want to hear cacophony.

There’s nothing cacophonous in the score to Bride. It is relaxing, pretty and rife with an atmosphere of completion. It feels as if Herbert West’s pursuits from the first film arrive at their natural conclusion. Unable to respect the frailties of life’s physical and chemical processes, West must remake life in his own image. He is no longer satisfied with reanimating the dead tissue of people. He has to piece that life together, himself.

I’m very happy with the lack of atonality in this album. It’s melodious and flows well. Many film scores have sharp angles of brash noise that is more sound accentuation than music. Even moments of brash strings in Bride have a soft sound to them: soft and gauzy, not unlike the mist of Herbert’s laboratory. I’m always interested in how sound and sight can meet on that common ground of sensory input. How music can “sound” like the subject it compliments in the visual. Sometimes, that sound can be distracting and some scores overpower the visuals in some or most of the film’s scenes. I don’t hear that problem in Bride. Re-Animator had a few scenes where I thought the music was a little too dramatic and overpowered the film, especially the scene between Meg and Dan, just prior to Zombie Halsey’s attack. It isn’t unpleasant, just a little loud. Because of its softness, Bride glides along the film, much like the bubbling, Taoist pace of the writing in Ursula K. Leguin’s book, The Lathe of Heaven. This relaxing pace makes it such an interesting contrast to the goriness of the film.

Stuart Gordon’s commentary track on Re-Animator was the track that mentioned the inversion of Jerry Goldsmith’s notes to Freud in the cues concerning Herbert West’s childishness. I attributed that comment to Richard Band and I apologize. I was happy to see reprinted in the liner notes of this CD an interview with Mr. Band, conducted by Cinemascore. I was interested to learn that he wrote the score to Re-Animator in about three and a half weeks. I also found it interesting that Mr. Band indicates he didn’t make any conscious study of the score to Psycho. He wanted there to be a connection, but he didn’t need to study the music feverishly. His more-relaxed approach to film music is a welcome change to the clichéd image of a tortured, benighted Erich Zann-esque composer.

Bride of Re-Animator‘s soundtrack is available at Amazon.