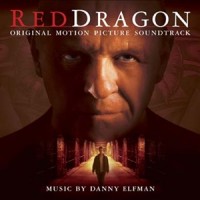 When Danny Elfman was composing the score to the film Edward Scissorhands, he made a habit of visiting the set of the film with Uncle Billy: the mummified head of an Indo-European man which Elfman introduced with great pride to his co-workers. Uncle Billy became the mascot of the crew and even got a credit in the film (Glionna, L.A. Times; 2001). Elfman is a man with an appreciation for dismembered body parts.

This gives him plenty of leeway to understand horror film music and the score to Red Dragon is a perfect example of his prowess. A remake of Michael Mann’s 80s classic, Manhunter, and based on the Thomas Harris novel of the same name, Red Dragon is the prequel to Silence of the Lambs and tells the story of Graham, the F.B.I. agent who put psychologist and serial killer Hannibal Lecter in jail. It also follows Graham’s search for the serial killer, Frances Dolarhyde, a man who believes he is turning into a dragon. Dolarhyde systematically stalks and kills families who epitomize the love and support he never had as a child. Elfman’s Dragon score is a schizophrenic blend of childish and monstrous music that makes the film effectively scary while also worming a sympathetic identification with Francis’s evil out of the audience. The childish side of the music reminds viewers that everything evil was young and clean, once. As poet William Blake phrased this point in The Gates of Paradise: “Every harlot was a virgin once.”

Despite its darkness, the score creates an eerie beauty in cues like “The Address”, when Graham enters the home of the slain Leeds family to find clues to their death and watches a home movie of them frolicking in their house. The melody sweeps with slow, gentle flutes and strings in a nostalgic, bitterly-lovely piece of music evoking the ghosts of the good family no longer alive.

Elfman has a sense of humor in commenting on the film’s score. In his commentary track accompanying the film, he makes it clear he had a blast with a particular cue entitled “Love on a Couch”, in which Dolarhyde is on a date with the only woman he’s ever felt at ease with: a blind woman named ‘Reba’. This cue is gravely disturbing, but I can’t describe it any better than Elfman can himself, which is why I will step back and quote him: “The tricky part for me was because we have horror, romance, and sex, all happening in the same cue, and I believe, although, some film music historian can certainly prove me wrong, but I believe I have scored the darkest, most grim bl*w job ever received in a movie.”

Red Dragon is a visceral, poignant film that probes many dark aspects of human psychology and Elfman’s score delivers the viewer to the unseen, leering shadows lurking in fevered nightmares that too-often manifest in flesh.