This film’s beautiful cinematography keeps vivid color to an effective minimum and relies on dreary, overcast, gray atmosphere to 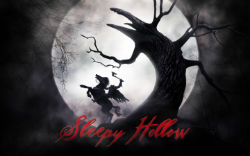 create dread. The score employs a similar concept by relying heavily on low-end orchestral instruments like contrabass, bassoons and tubas, and cuing gentler instruments like harps and solo violins sparsely.

“Introduction”: The ideally ominous way to begin a film like Sleepy Hollow. I’ve always been partial to the decapitation sequences in this film because they are executed with a minimum of gore and a lot of slick finesse. The male chorus that begins at 20 seconds into this cue is memorable for its atmosphere.

“Main Titles”: Not as memorable to me as the Introduction, but director Tim Burton makes an interesting observation on his commentary track to the film about Danny Elfman giving himself a “big note” during this cue when Elfman’s name is credited.

“Young Ichabod”: This brief little cue is endearing and memorable. Ichabod is tormented by incomplete memories of the death of his mother and this cue is the prelude to the horrible answer that will be revealed in later flashbacks in the film.

“The Story…”: This sounded to me like exposition and it was effectively downplayed. Almost like documentary music.

“Sweet Dreams”: This one begins slowly, like several other cues. While it reiterates the pretty main theme in “Young Ichabod,” its recitation is not as memorable and sounded a little deadpan to me.

“A Gift”: This cue has a similar lush, sweeping sound to “Portrait of a Prince” from Trevor Jones’s From Hell.

“Into the Woods/The Witch”: The female soloist heard in several dream-like cues of this soundtrack, like “Young Ichabod” and “More Dreams,” sounds a bit more menacing in this piece than the others. She flattens her pretty voice.

“More Dreams”: Without question, this cue is my preferred track in this soundtrack. The violin trill at 18 seconds into it has given me chills every time I’ve heard it for the last 10+ years or so. I’ve heard it on CD and in the film. The scene begins innocuously, as Ichabod’s mother’s breath sends a flock of dandelion down blowing away in a gentle breeze. This scene concludes with Ichabod’s flashbacks about the unjust demise of his mother.

“The Tree of Death”: If you’re a “The Two Trees” by W.B. Yeats fan, I recommend reading that poem while listening to this cue. It will give the whole “demons with their subtle guile” phrase a new, dramatic dimension.

“Evil Eye”: The tubular bells in this piece are a bit much. The tube bells in this cue are always overemphatic but always enjoyable.

“The Church Battle”: The strings in much of this cue foreshadow the “In the Forest” cue from The Corpse Bride.

“Love Lost”: I can’t get enough of the mournful choruses in this soundtrack or the solemn flutes. They make melancholia sound intense.

“The Windmill”: This one sounds to me like a muted, slower version of the “The Church Battle.”

“The Chase”: At about this cue, I’m sort of getting tired of the suspense pieces. I respect Elfman & Co.’s decision to keep away from using much “war march” type of music for evoking the presence of the Hessian (Headless Horseman), since the Hessian was a mercenary rather than a soldier, but I do think this decision cost the soundtrack some potential for sweeping battle suites that would have added more depth to the soundtrack and allowed it to be less repetitive.

“The Final Confrontation”: The Hessian’s maniacal theme is heard here in complete fury.

“A New Day!”: This cue weaves a new century. A new beginning. And it is sublime.

“End Credits”: This cue is about the closest this soundtrack ever gets to “war marching” music that I noted a lack of on this soundtrack. It arrives a little late and worth the wait.

I trust this soundtrack to deliver creepiness and ghostly fun at any time of the year. Sleepy Hollow‘s soundtrack is available here.