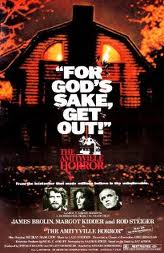 High Hopes. That was what the new owners of the ominous house on Ocean Avenue felt about their home. They had these words placed on a sign posted on the front lawn of the property that once belonged to the real-life Defeo family. The house where they were murdered. The sign was removed by the time George and Kathy Lutz moved into the house, but the ghostly remembrance of hopes being shattered remains. Thus, the stage is set for the occurrences which created the legend that became the basis for the film adaptation of The Amityville Horror. The score of the film takes those hopes and contorts them into demonic, nightmarish cues that are beautiful, repulsive and chilling.

It is a shame that Schifrin, originally interested in writing music for The Exorcist, had a vivid falling-out with The Exorcist‘s director, William Friedkin. The Exorcist, however, is a movie that doesn’t need much musical accompaniment. I conjecture that Friedkin had this mindset from the beginning of the project and didn’t communicate it to Schifrin in a reasonable manner. This probably led to hurt feelings and unprofessional displays that could have been avoided. The Exorcist is frightening, in part, because the lack of music allows it to play more realistically. The presence of Schifrin’s unusual and pithy score to Amityville gives this film a more ethereal feel than The Exorcist or The Omen. I consider the three to be the most recognisable demonic possession scores of the 1970s. All three films experimented with sound and music in different ways, and offered their audiences unusual results.

“Amityville Main Titles”: The main titles are the most ornate piece in the soundtrack. The sad melody is led gently along by a ghostly female voice that evokes chilling ripples of apprehension. Memorable and poetic, this piece alone is worth the price of the soundtrack. The definition of poetry in horror media is the metaphorical reflection of dark nights of the soul. This piece is the soul of the colonial house in Amityville.

“Father Delaney”: Sliding strings and ear-piercing whistles beginning at 2:29 make this piece an uncomfortable slide into the creepy edge of the film. It is not surprising that this atmosphere must assert itself immediately because the score has to lay the groundwork for why the family’s hopes for their new home are already taking a turn to a tragic, horrifying side.

“One Year Later”: The score time-travels back to the lovely and tauntingly haunting title theme. It is augmented by slow strings and tiny pierces of percussion. It brings to my mind the beginning of Goldsmith’s Omen cue, “Safari Park”. What I love about the “Safari Park” cue is the teasing way the family’s theme is executed in minors to make it sound beautiful-but-menacing.

“Screams”: At 1:16, the shrieking strings evoke the strings of Psycho. They are not nearly as memorable, though. This is a weak track.

“The Windshield”: What is it about horns counterbalanced with convoluted strings that just makes everything horrifying? I don’t know, but this cue makes up for “Screams”’s uninteresting segue. Woodwinds have been underplayed, until this cue. The clarinets get to be evil at 2:28.

“The Staircase”: I’d like to think that the famous photograph of the Brown Lady of Raynham Hall played a part in Schifrin’s inspiration for this piece, though I’m aware it probably didn’t. The clarinetists start sounding evil again at 1:40. At 2:30, strange, piercing whistles and percussion, including piano, begin.

“At the Park”: Someone please suture shut the mouths of the clarinetists.

“The Window”: Beautiful. I can’t sum it up more accurately. There is nothing more beautiful than a soft, soothing piano played in a bright major key. Beauty that is not negated by the cue’s descent into dark strings, beginning at 1:55.

“The Ghost”: If ghosts exist, they’d probably intrude on physical reality whilst being accompanied with cues like this one. Spooky, ethereal and a force to be feared. An uneasy cue to listen to.

“The Wall”: The weird descent of the notes in this piece echoes some of the frenzy in the overture to Vertigo. This makes this cue, like “Screams”, a little flat. Whenever cues in this soundtrack sound like cues from another film, they sound uninteresting.

“Bleeding Walls”: This is a chaotic cue. Strange, scary and somewhat nauseating during the last minute. It’s a very strange cue. It more than makes up for the flatness of “The Wall”.

“The Ax:” You’d think, with a name like “The Ax”, that there would be a certain amount of suture evocation in the sound. Not so. I was a bit disappointed with this cue. It was a little too perfect for me. There was not enough of the chaos that was so vividly exploited in “Bleeding Walls”.

“Postludium”: This piece returns to that weak Vertigo-esque sound that I don’t care for. It is moderately haunting.

“Amityville End Credits”: The minor harp plucks and morose whistles dress the main titles up to give a more-tragic sound to this rendition of the main theme.

The Amityville Horror‘s soundtrack is one that accurately delivers a haunting. For those of us not fortunate enough to see ghosts and, also, aren’t the right candidates for demonic possession, this soundtrack provides thrills that equal both these quizzical paranormal pleasures.

The Amityville Horror soundtrack is available through Amazon.