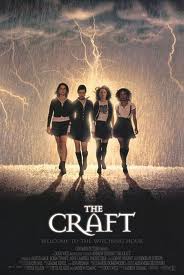 Some films about witchcraft and paganism have not attracted the right attention to themselves because they often end up sensationalizing the elements of witchcraft in a way that makes practitioners look like they are delusional, power-crazed hellions.

This film deals with disturbing social issues that are not mortared values of the practice and discipline of Wicca. This film is not the best showcase for Wicca as a natural, practical, Earth-based religion. It’s a horror film and it’s meant to horrify. The four main protagonists of the film, four outcast high school girls, turn to witchcraft as a way of heightening their status in the Humanity department.

Wiccan author Gerina Dunwich reiterates several times in her books that the main tenant of Wicca is: “Harm none and do what thou wilt.” This tenant is a main theme in this film, but the point is overemphasized.

The Craft spawned two separate soundtracks: one with just the orchestral score composed by Graeme Revell and a soundtrack of the pop songs used in the film. This review is covering the pop song soundtrack, which only contains one suite from Revell’s score.

“Tomorrow Never Knows” by Our Lady Peace: This is a cover of a Beatles song. Having heard both versions, I would say this once isn’t as psychedelic as the original. It’s more rock-oriented. The rock instrumentation, however, ejects some fantastical elements from the original and gives this version a harsher realism.

“All this and Nothing” by Sponge: What is neat about most of the songs in this film is that they sound like songs that the kids would be listening to in the film. This song is a great song to accompany disaffected youth without too much whining angst.

“Dangerous Type” by Letters to Cleo: A guilty pleasure of a song. The social elitism of the school the girls attend is intended to be narrow-minded and crushing for the four witches. The scene this song is played in dramatizes their – *ahem* – buoyant rebellion against the cliques that they are outcasts from. In other words, they are too cool for conservatism. This song was originally sung by The Cars.

“How Soon is Now?” by Love Spit Love: The next cover song. This time, it’s a cover of The Smiths. This version of The Smiths’ song is good and has more of a psychedelic sound than Our Lady Peace’s cover of “Tomorrow Never Knows.” I read it as Buddhist in theme, given the nature of its lyrics, but, just as Our Lady Peace brings psychedelic ideals into the real world, this song brings Buddhist ideals into the real world by sliding into angry passages. I think most people have had to take their ideals to a chopping block at some point when they realize that what they are working for is not working for them.

“Dark Secret” by Mathew Sweet: There’s a great deal to love in the lyrics of this song. It has spooky instrumentation that augments the scene it appears in with an eerie flavor. The girls are heading out for a night of witchery on the coast.

“Witches Song” by Juliana Hatfield: This song was used to accompany a scene where the girls are headed out for a spell, but this one had a much more positive feeling and sound to it than the scene that used Sweet’s “Dark Secret.” The scene took place during the day and the spell the girls cast was, overall, more jovial.

“Under the Water” by Jewel: I’m not much of a fan of this song. I try to listen to the song as synching up well with the definition of casting a spell as “opening a floodgate.”

“Warning” by All Too Much: This song has a funky sound to it that reminds me of Siouxsie and the Banshee’s version of Ben E. King’s “Supernatural Thing.” More on the Banshees at the end of this review.

“Spastica” by Elastica: Not much of this song is heard in the film, but it plays when the girls crash a party, looking for the rogue witch, Nancy.

“The Horror” by Spacehog: This song is perfect for accompanying a drunk ex-lay about to be, essentially, led to the slaughter. Just in case anyone reading this needs that kind of song in their personal collection. Please note: The Craft‘s filmmakers used this song to maximum capacity in this context with some fun, grave performances by Fairuza Balk and Skeet Ulrich.

“Bell, Book and Candle” by Graeme Revell: This is the only part of the orchestral score from the film to be included on this CD. It is a striking part of the soundtrack because of its Indian flavor. It goes well with “Tomorrow Never Knows” and “How Soon is Now” in its evocation of Buddhism and other Eastern philosophies concerned with controlling anger, bitterness and resentment in a way to make actions more productive and limit harm done to anyone and one’s self.

While The Craft is a film about the dark and light side of natural powers, I would say that the soundtrack, overall, is one that has a positive sound to it. It does, however, have some irritating omissions. Siouxsie and the Banshee’s “Sick Child” accompanies a well-acted scene in The Craft, but is left off this soundtrack. This Banshee’s song was not the only song in The Craft to be left out. Portishead’s “Glory Box” was also given a snub. I suggest swinging by iTunes for some downloading to make your The Craft playlist complete.

The Craft‘s soundtrack is available at Amazon.com.