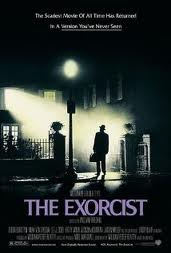 February is Fundraiser Month at Innsmouth Free Press. Please consider making a donation to the site, for a chance to win one of our books. You can also like our Facebook page, or our book pages, either on Facebook or on Amazon. Thanks!

The version of “Tubular Bells” that I have is the version from the compilation album, Pure Moods. The score to The Exorcist is sparse and “Tubular Bells” is the most memorable portion of it. This film’s producers made a decision not to put much music in the finished picture. This may have been due to financial restrictions, since much of the sound department’s budget was consumed by experimenting with guttural, harsh sounds (which included bees), to accompany Father Merrin’s discovery of Hell in Ninevah and to contort actress Mercedes McCambridge’s voice into a demonic chorus. In his non-fiction book, Danse Macabre, Stephen King indicated that he found the original novel of The Exorcist by William Peter Blatty less-than-stellar. I don’t feel that way about the novel, but I do feel that way about the main musical introduction to the film and the other symphonic portions of the score. These musical cues don’t interest me. They sound incidental. I don’t feel the film made full use of “Tubular Bells”, either.
What was interesting to me about the novel, The Exorcist, was that it was more detailed and more offensive than the film. I saw the film first and didn’t think anything could be more offensive. I was wrong. For example: the Devil goads Father Karras to have sex with Regan, an insidious suggestion omitted from the film. The dirty phrases that did make it into the film seemed to me tame in comparison. It is also a great deal sadder. The last section of the novel ties the events of The Exorcist into a story of horror that begins with the dislocation of a spirit and ends with a reinstatement of faith. Its plot is rooted in a concept Robert Louis Stevens referenced in The Strange Case of Dr. Jekyll and Mr. Hyde as a horror of the spirit not equaled at the moment of birth or death. Horror of the spirit. That phrase describes The Exorcist‘s use of “Tubular Bells” perfectly.
The version of “Tubular Bells” from Pure Moods is also more detailed than the sound clip of it used in the film. This version builds on the short clip familiar to audiences, but then is complimented by harsh, orchestral points that sound much like the orchestra-hit function on a standard electric keyboard. These harsh points build until the theme doesn’t even sound like itself. It completely changes. It transforms, but its transformation sounds positive rather than negative. This is because of a key shift from minor musical phrases in the beginning of the piece to major phrases in the middle and end. The end of part one concludes with a soft fading of the theme as played with that positive tone. Although not specifically written for The Exorcist, “Tubular Bells” mirrors Reagan’s transformation back into herself at the end of the story which is why it’s too bad “Tubular Bells” pt. 1, in its entirety, is never heard in the film. The first time “Tubular Bells” is heard in the film, it accompanies Reagan’s mother, actress Chris McNeil, walking home after filming. It can be gleaned that “Tubular Bells” is meant to accentuate her character more than her daughter’s and to haunt Chris with a creepy sound that foreshadows what it going to happen to the center of her life.
“Tubular Bells” is heard again at the end of the film. This time, it accompanies Father Dyer’s character. Here, it is a grim accentuation to the Father who has lost so much from his mortal life during the course of the film, but has reinstated himself in his faith. It fades out and leaves Father Dyer wondering about the mechanisms of the soul.
Pure Moods is a funky, weird album aimed at a New Age market, but it includes other tracks of interest to horror-film soundtrack admirers besides “Tubular Bells”. Mark Snow’s theme to The X-Files gets a cheesy-but-fun disco makeover, and David Lynch fans get a dose of serpentine memory lane with the theme to Twin Peaks.

Pure Moods and the complete soundtrack to The Exorcist are available through Amazon.com.