[dropcap]T[/dropcap]his film is a familiar one for many Gothic horror film fans. It is derived from Henry James’s The Turn of the Screw and William Archibald’s play The Innocents, and creates a dramatization of the nefarious nature of James’s story that is very elegant. The Innocents, like The Watcher in the Woods and Wait Until Dark, is a film that uses a musical theme as an integral element in the story without being a musical like Phantom of the Paradise or Sweeny Todd.

This score is rooted in two integrated plots. First, a governess named ‘Miss Giddens’ (Deborah Kerr) is hired to care for two orphaned children in a spacious English manor, Bly. She’s being hired because the former governess, Mary Jessel, drowned after her horrid lover Peter Quint, the valet of Bly, died under suspicious circumstances. Second, the Quint-Jessel relationship plot. The Quint-Jessel plot can be summed up as: He’s a monster and she’s a moron. I’m glad both characters are dead by the time the film begins. Oh, if only they could have stayed dead.

Miss Giddens becomes convinced that the specters have returned to Earth, and are attempting to possess the souls and bodies of the children in Gidden’s care: brother and sister Flora and Miles. Giddens deduces that Quint and Jessel have to possess the children’s bodies in order to carry on their sick relationship, now that their deaths have gotten in their “love’s” way. Wow. Just wow. The insinuations of The Innocents make the incestuous relationship between Sonny and Patricia Montelli in Amityville II: The Possession tame by comparison. The Innocents required a score that wove its musical notes into a funerary wreath of hell, flesh, death, dust, and madness. Let’s look at the brave people who undertook this odious assignment:

Georges Auric and Paul Dehn wrote The Innocents‘ main theme “O Willow Waly,” with Auric writing the music and Dehn writing the lyrics. This is the integral theme that is played throughout the film. It is the first sound heard at the start of the film. Later, it is played in a music box owned by Flora and listlessly by her brother Miles on a piano. This theme is sliced into some atonal segues and sharp points of musical accentuation throughout the film. It’s a score that oscillates between embodying creepy innocence and explicit hellish horror. Effective as it is, “O Willow Waly” had some help from an uncredited, unsung pioneer of electronic musical composition: the late Daphne Oram.

Daphne Oram was a British composer and an engineer with a talent for creating electronic audio oddities. She created the electronic sound effects used in The Innocents. These sound effects are used conspicuously in a scene with Giddens being hounded by the disembodied voices of 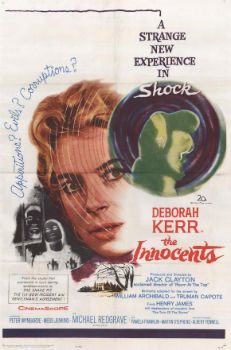 Quint and Jessel, as Giddens walks restlessly with a candelabrum through Bly’s darkened corridors. Oram learned how to play piano and organ at an early age. There is a brief segue of organ music used in The Innocents when Giddens discovers a bouquet of flowers left at the grave of Mary Jessel. I don’t know if this cue was written and/or performed by Oram, or not, but it’s possible.

A.G. Ambler and John Cox, both veterans of film sound recording, captured Oram’s electronic “spirits” on audio and I’d playfully liken them to a team of paranormal investigators who tried to capture the voices of real spirits in an episode of In Search Of, entitled “Spirit Voices.”

I wonder if these folks that created the soundscape of The Innocents knew at the time just how enduring this creepy score would be for decades to come. Julia Merriam, a reviewer of Classic-Horror.com, cites in her review of this film that the score’s atmosphere of uncertainty contributed to Flora and Miles being so creepy on screen because “O Willow Waly” sounds like a bittersweet folksong hearkening back to superstitious days when the dead held power over the living. The uncertainty is: Are Flora and Miles’s lives really their own, or do the dead Quint and Jessel that reared them and became so intrinsically rooted in those poor children’s lives have some rights to exercise over the bodies and souls of their former charges? The answer is NO, but, if Quint and Jessel were so corrupt in life, they won’t stop being corrupt after death, if given the opportunity to rise again. The children, especially Miles, are on some level aware of this. One of the ghastliest moments in this film doesn’t have much sound accentuation at all, but utilizes the music of poetry and actor Martin Stephens’ unsettlingly mature delivery of the poem’s lines. This is a scene where Miles writes and recites a poem as part of a game to pass the time. The final stanza recited by Stephens is as follows:

What shall I say when my lord comes a-calling?

What shall I say when he knocks on my door?

What shall I say when his feet enter softly?

Leaving the marks of his grave on my floor

Enter my Lord, come from your prison.

Come from your grave. For the moon is risen.

Does this sound like a child’s game? A poem of pure fantasy? Perhaps it was, but it is unsettling, regardless of the “innocence” of its nature. If I were the governess, I would not be thrilled about a charge of mine pining away for someone like Quint, which is what the poem ambiguously suggests Miles is doing. Then again, perhaps Miles is writing the poem from the point of view of Mary Jessel, while she was still alive and mourning Quint’s death.

This brings me to another important ambiguity that contributes to the uncertain atmosphere of the story: What is appropriate and inappropriate for Miles and Flora to mentally digest at their ages? All of this suggestive horror surrounding Flora and Miles makes them seem strangely ethereal and inhuman because their innocence has been contorted by the corruption of their perverted caregivers, and the obscenities Miles and Flora were forced to live alongside while Quint and Jessel were still alive.

Miss Gidden’s character reverberates between being an earnest governess and a foul-minded madwoman. Oram’s weird electronic sound effects mirror Gidden’s hysterical psychological and spiritual oscillations. These effects sound like a Theremin that has been stripped of its cheesiness. “O Willow Waly” is effectively morose, but it’s the reverberating ambient noises in the film – such as Jessel’s pitiful cries, Quint’s brutal breath, otherworldly tones, and the cue with Flora’s music box tinkling alongside echoes of her and Miles’ diabolical laughter – that are what make the film’s soundtrack shocking, unstable, insane, and terrifying.

At present, the soundtrack to The Innocents is not commercially available at Amazon, but the film can be found here.