The plot of The Wicker Man is rooted in fundamentalism. Fundamentalism can be summed up as: It is what we believe. The thoughts of 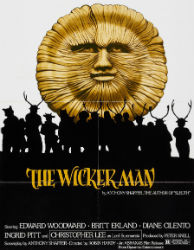 the community of Summerisle in this film can be summed up as: If we believe our life will benefit from your death, then it will.

Sgt. Howie is a police investigator that travels to Summerisle to search for a missing girl named ‘Rowan Morrison.’ It soon becomes clear in the film that the community of Summerisle does not shy away from sacrificial human slaughter in times of blight. Sgt Howie is increasingly alarmed as he becomes convinced that Rowan is the intended sacrifice.

It takes a certain amount of indifference to sacrifice anyone or anything. Malice isn’t necessarily a requirement, although that could be a factor, too. Indifferent disregard is more essential to the equation. This soundtrack is an eminent rota of ideology gone mad. All the music is on one CD, but it is divided into two separate parts.

Part One: Songs from Summerisle

“Corn Rigs”: This song is based on ballad poetry from Robert Burns. It is a harmless-enough-sounding song. It’s a folksy song that could be heard in any pub, bar, or street corner. It lends an uneasy familiarity and realism to the film.

“The Landlord’s Daughter”: A much more offensive song than the previous one. Its sexual double entendres disgust me just as much as they disgusted Sgt. Howie in the film.

“Gently Johnny”: The layering of the vocals at the end is the highlight of this cue.

“Fire Leap”: Horror writers like H.P. Lovecraft with his story “The Dunwich Horror,” and Arthur Machen in his tale, “The Great God Pan,” utilize the theme of human reproduction in a repulsive, disgusting way. This song manages to do the same thing in its lyrics.

“Willow’s Song”: A very pretty song that accompanies what is cited in the liner notes of the CD as the “infamous wall-slapping scene” in the film. The Scottish fiddle is bittersweet and is the star of the song to my ears.

“Procession”: This piece is based on a Scottish folk tune that Giovanni dolled up with a waltz-time rhythm.

“Chop Chop”: “It’s a game of chance,” is what Lord Summerisle says in the film. And this cue is the right sound to emphasize that point.

“Lullaby”: These sad, piercing strings accompany Sgt. Howie as he is prepared for his march to the wicker man.

“Sumer Is A-Cumen In”: An old folk song that is thought to have been composed sometime around 1260 AD. Its references to the cuckoo bird make it particularly sinister to my ears. (The cuckoo is as extinct as Christianity in Summerisle.)

“The Masks/The Hobby Horse”: This cue is frightening in the film. The masked villagers rise from behind the quayside stones to stare at Sgt. Howie as he attempts to leave Summerisle.

“Searching for Rowan”: I first heard of The Wicker Man from the album, Hyaena, by Siouxsie and the Banshees. They reference a wicker man in their song “Blow the House Down.” Whether it’s a direct reference to this film, or whether the lyric is merely using the image of a man made of straw, I can’t say, but that song is where I first heard the phrase, “the wicker man.” Banshee albums like Hyaena, Peepshow and Juju drew heavily on European folklore and old English nursery rhyme imagery to create their lyrics. This section of The Wicker Man‘s soundtrack does the same thing by incorporating the “Baa Baa Black Sheep” rhyme into the music.

“Appointment with the Wicker Man”: I was startled to hear the inclusion of Christopher Lee’s ominous statement to Howie in this cue on the soundtrack.

“Sunset”: This is a somber conclusion to a unique specimen of a horror film. The Wicker Man‘s soundtrack is best remembered by a quote from Christopher Lee included in the liner notes of the CD: “…the more I listen to it, the more beautiful and extraordinary I believe it to be.”

The soundtrack for The Wicker Man is available at Amazon.com.