A thunderstorm rages as we fade in. The wind howls, rising to a shriek as organ music emerges from the din, matching 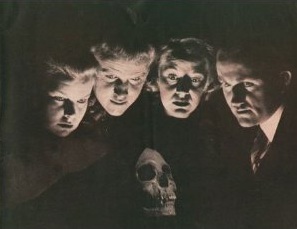 its ominous timbre. Once the sounds have reached their crescendo, a voice – cold, distant, as if summoned from the other side – intones, “Dark…fantasy.”

And so begins one of old-time radio’s most underappreciated programs. Airing from November 14, 1941 through June 19, 1942, Dark Fantasy originated from station WKY in Oklahoma City and was broadcast nationwide by NBC-Red through its flagship station WEAF.

Although it dabbled in science fiction and the occasional whodunit, Dark Fantasy’s focus was on horror, an attempt to fill the spook-story void left by Lights Out (which had been off the air since 1939, awaiting its own revival in 1942) and taking full advantage of its Friday, 11:30 pm time slot. (It’s been written in old-time radio archives that this was because the series was considered far too terrifying for 1940s youth, when, in fact, NBC had airtime to fill after discontinuing its late-night dance band remotes.)

The show was created by ‘Scott Bishop’, the pseudonym of Kansas native George Marion Hamaker, under which he wrote a number of radio programs for WKY, including crime series (Calling Detective O’Malley), soap operas (The Heart of Martha Blair), and horror (Tales of the Witch Queen). Bishop would script all 31 episodes of Dark Fantasy, citing as influences the likes of Edgar Allan Poe, Thomas DeQuincy and Samuel Coleridge.

Describing the appeal of macabre tales for radio, Bishop explained, “Granted that listeners enjoy a good whodunit yarn where all the facts have sound reasons for existing, I think there is more fascination in the ‘Dark Fantasy’ type of tale, where the horror comes from things unusual or, even, supernatural. In this case, it is not the terror itself that causes listeners’ hair to rise. It’s the unseen, unaccountable cause of the terror.” Following Dark Fantasy’s run, Scott would continue to work in radio, creating the series, The Strange Dr. Karnac, and contributing to such shows as The Mysterious Traveler and The Sealed Book.

The cast of Dark Fantasy was comprised of WKY staff members and talent from the Oklahoma City area. Most commonly heard on the program in leading roles were Ben Morris (a veteran radio actor who frequently worked with Jack Webb of Dragnet fame) and Eleanor Naylor Coughron (a founding member of Oklahoma City theater, who would later have an acting award named in her honour). Supporting cast members included Minnie Jo Curtis, Muir Hite (whose flair for animal imitations was often put to use), Garland Moss, and WKY’s Traffic Manager Daryl McAllister, who was also in charge of sound effects.

Unlike many classic radio programs, Dark Fantasy eschewed recurring characters, or even a narrator to introduce each tale, opting for the cold opening described above (voiced initially by Keith Painton in the first five episodes, who then turned duties over to Tom Paxton) before launching into that week’s self-contained episode. (Radio enthusiasts suggest it was this decision that contributed to the series’ shortened lifespan, since it lacked an identifiable voice à la The Shadow or Inner Sanctum.) Bishop’s fondness for pulp tales of horror and mystery, combined with the program’s late-hour broadcast and relatively obscure status, allowed Dark Fantasy to traffic in all sorts of then-unseemly material: murder, grave robbing, strange scientific experiments, occult practices – none were considered taboo.

One of the show’s most successful tales is “Death is a Savage Deity,” in which a young couple’s wedding is postponed by a series of unexplained deaths, which they discover are part of a voodoo plot by the bride-to-be’s bitter, spinsterish aunt. It’s an atmospheric story that uses the mind’s eye to great effect, especially when the couple locates a secret room filled with voodoo dolls modeled after themselves. Also among the series’ highlights are “The Sea Phantom” (A skeletal ghost leads treasure hunters in pursuit of a two-hundred-year-old Spanish galleon), “Funeral Arrangements Completed” (more ghostly goings-on – this time, a vacationing husband and wife find their headstones awaiting them upon arrival), and “Pennsylvania Turnpike” (a driver picks up an elderly hitchhiker and ends up traveling through time as part of a centuries-old quest for revenge).

Perhaps the show’s best-known episode is “W is for Werewolf”, which WKY heavily promoted, as it was Dark Fantasy’s thirteenth installment and aired on Friday the 13th of February 1942. The story itself is fairly routine – a doctor journeys to a remote island hideaway to visit a colleague, whose son is afflicted by a mysterious curse, a mystery only to those who missed the title – but its use of sound effects and descriptive dialogue help make it a memorable example of old-time radio horror.

Of course, the series was not without its missteps. A prime example of this would be “Spawn of the Subhuman”, which squanders an evocative moniker on a tale in which a scientist transplants the brain of an opera singer into a gorilla. Your guess is as good as mine as to what purpose this would serve, but our scientist is convinced it will guarantee fame and fortune. That is, until the “twist” ending, where we learn the singer, in his human form, was losing his voice! – a plot point unrevealed until the very second it’s needed – prompting the inevitable “doctor dies at the hands of his creation” finale.

Although it often suffered from the usual pitfalls of vintage radio dramas – the dialogue sometimes strained to convey information, lines were occasionally flubbed, the plot resolutions could rarely be described as revelatory and may seem corny by today’s standards – Dark Fantasy still remains an underrated example of the medium. Its use of sound effects and music, provided by Ken Wright on the Kilgen Organ, helped create a palpable atmosphere of dread, overcoming any narrative weaknesses. The voice talent was also strong; it’s easy to see why Morris and Caughron often handled the leads, with their vivid rendering of characters.

Perhaps it’s telling that, despite its limited run, Dark Fantasy has stayed in the consciousness of old-time radio aficionados, with 27 of its 31 episodes surviving. They can be heard here.