Aside from one Canadian show, the radio series we’ve looked at so far have been American. This has come down to a combination of 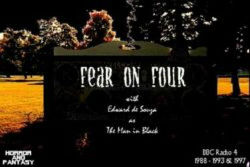 time constraints, what people sent us, and the reality that the American shows that were broadcast in the golden age of radio were both more numerous and more famous in the speculative genre than their counterparts outside the U.S. Also, they have been more frequently preserved.

But that’s not to say there have been no non-American series. So, this last week of the summer (and the last week of Summer Screams), we’re going to look at a particularly venerable entry from the United Kingdom – Fear on Four. This half-hour classic series goes back to the 1940s. First called “Appointment with Fear,” it sporadically ran from 1943 to 1955 on the British national broadcasting network, the BBC, in ten “series” (In the UK, a “series” on TV or radio is what Americans and Canadians call a “season”). It was created by a notable mystery author of the time, John Dickson Carr, who first wrote for the American show, Suspense.

Then it was revived from 1988 to 1997 for four more series on BBC Four and a fifth in 1997, for a total of fifteen series. Only four survive out of almost sixty episodes from the original ten series (Forty-six from the revivals survive), even though Appointment with Fear is hailed as the most famous (or is that notorious?) horror radio series for the BBC.

Why did this happen? Well, the BBC, like many radio and TV broadcasters up through the 70s, was in the habit of “wiping” and reusing tapes, without keeping the originals. This is why you can’t get the earlier years of The Johnny Carson Show (though Carson eventually wielded enough clout to stop this practice and preserve his later episodes), and why many a greedy studio producer now curses many a greedy and short-sighted predecessor. Those of the more archival inclination aren’t very happy with them, either.

As with most of these radio series, Carr created an ongoing narrator – in this case, “The Man in Black” (Yep, even before Johnny Cash), who first appeared in Suspense. The original Man in Black on BBC was Valentine Dyall, while Edward de Souza took up the role in the revival (Dyall having died in 1985). The character was so popular that he got his own show, The Man in Black, in 1949. However, none of the eight episodes from the series survive.

Perhaps because Carr was also a writer for Suspense and was inspired to create Appointment with Fear for the BBC by his previous gig, stories that had appeared in other U.S. shows appeared on Appointment with Fear and the Fear on Four revival. “The Speaking Clock,” for example (which is written by Carr), originally appeared on Suspense as “Mr. Markham, Antique Dealer,” while the second series finale, the now-lost “The Man Who Was Afraid of Dentists,” and the eleventh episode of the first series of Fear on Four did remakes of Arch Oboler’s infamous “A Day at the Dentist’s” from Lights Out.

As always with these series, the writers also freely pillaged the classics. There is, of course, Poe’s “The Pit and the Pendulum” from the original series. Other Poe stories (now lost) included “The Tell-Tale Heart” and “The Cask of Amontillado.” We also get some 19th century feminist horror with Charlotte Perkins Gilman’s “The Yellow Wallpaper” in The Man in Black and series three of Fear on Four. The venerable “The Monkey’s Paw” by W.W. Jacobs was dragged out of mothballs for series one. And Supernatural fans might enjoy the sixth entry from Fear on Four‘s 1993 fourth series, “Hellhound on My Trail,” obviously inspired by the Robert Johnson song.

While the general structure of this series is similar to that of the American ones, it has some differences. First, of course, there are the cultural differences in accent, class structures, dialect, and so on. And there are fewer sound effects (The BBC was at first hesitant about going whole hog on the more showy American style).

The pacing and tone of the episodes are also different from the American ones. You can especially see this in the comparison of the two surviving versions of “A Day at the Dentist’s.” The Fear on Four version is much longer than the Lights Out version. This allows for more backstory. The British version eschews the gross-out physical effects and vague background on the victim’s crime in Arch Oboler’s version for something far more sexually disturbing and explicit in its description of the revenge, and the motivations for it. Which version is better? I lean toward Oboler’s, which is short if not sweet, and leaves a lot more to the imagination. But that hardly makes the British version a chill-free day at the office.

Such writing did not begin with the revival and the more explicit standards of the 1980s. “The Speaking Clock,” for example, is quite happy to get as explicit as necessary about the “heroine”‘s sordid backstory and makes no bones about her willingness to kill in order to escape a situation partly of her own making. The ending is also downright cynical.

A third major difference is probably now apparent. In general, Appointment with Fear and Fear on Four lean away from the American inclinations toward explicit supernatural underpinnings (though this did not stop Fear on Four, especially, from doing supernatural and even sci-fi stories). A lot is left to interpretation and, in the case of the Carr-written stories, apparently supernatural explanations are debunked in a way that must have inspired the writers of Scooby-Doo. This was a specialty of Carr’s writing.

In addition to the radio series, both The Man in Black and Suspense got a film version (in 1949) and a TV series (1949-54). The latter ran for 60 episodes. Carr wrote for both. He ended his career writing for film and television, and died in 1977.

So, where does this leave the future of radio horror? As I’ve said in the past, the Internet seems to have fostered a revival of the old classics, while allowing the relatively inexpensive creation and distribution of new ones. In addition to Pseudopod (which we reviewed a few weeks ago), a revival for Fall 2012 of the old radio show, Suspense is being put out by the Mythos-friendly Blue Hours Productions. First up? Lovecraft’s very own “Cool Air” (by way of Rod Serling). And if your thoughts turn toward more “modern” horror, there’s the serial drama, The Zombie Podcast, about the 15th year of a zombocalypse. It’s currently on its third season of 20-minute episodes.

So ends our summer column as the fall rolls in. Did you enjoy our entries? Would you like to see more? Got some ideas for new radio series to review? Let us know.