In the dream, you are falling, lost in the listening distance as dark locks in….

No matter what you believe or may have been told, truth is, you haven’t quite heard horror audio (you know, the old school radio 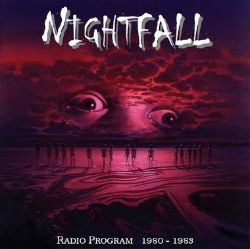 drama variety) until you’ve heard a show called “Nightfall“. Frankly, it doesn’t get much better or creepier. And for a show that really hit the scene toward the end of an era – basically, the final gasp of radio drama actually broadcast over the airwaves here in the U.S. – it packed quite a wallop!

Let’s take a trip back to a time when disco was beginning to fade and hair bands were blossoming. Back when the radio dial was actually a dial. Back to 1980. An evil genius named ‘Bill Howell’, labouring deep in the radio labs of the CBC, concocted an insidious concept. A new mix on an old formula. An anthology of horror tales and mysteries utilizing the talents of many talented writers, actors and sound engineers spread across the wild, frozen tundra of the Canadian wilderness and beyond. A bit overdramatic, you say? Possibly. I am a fiction writer, after all. But, essentially, Nightfall was the brainchild of veteran producer Bill Howell, who kickstarted what is perhaps the most bone-chilling collection of horror this side of Stephen King. Bill Howell was sort of the Arch Obler of his generation, I suppose, and Nightfall was his Lights Out.

But it’s only audio, you say? How scary can that be? Pretty damn scary. Unnerving enough for me to click the off switch on the ole FM receiver halfway through a show, back when I was a youngster. Back when a vivid imagination filled in the shadows at night with those things that go
bump. And if there is one keyword that should be tied to horror audio, it is imagination, simply because your mind paints the pictures and fills in the blanks. You are the director of photography for the visuals that will play in your head.”Theatre of the mind” and all that jazz. So, yeah, again…. Pretty damn scary!

Nightfall was booted off a few affiliate stations at one point for being overly intense, as I understand. Apparently, some listeners’ ears were a little too sensitive and couldn’t handle the bloodletting and carnage of a few episodes. To this, all I have to say is: Wahhhhhh! Poor babies! It is horror, after all. Did you really think that there would be no blood spilt? Really? If you want happily-ever-after, then look elsewhere.

You can find every installment of Nightfall floating around the Internet, but therein lies a problem. With no official outlet for the series, other than a few cassettes and CDs that can be tracked down on Ebay, or perhaps in the dusty bargain bin of second-hand music stores, the sound quality of the mp3s that can be downloaded is often not the best. Certainly not compared to the sonic fidelity the shows were originally mastered in. Nightfall, unlike the old-time radio shows of the golden era, was recorded in a modern age, with the same multi-track stereo recording techniques you’d find in a studio album of the time. Engineered for FM stereo broadcast, these shows really shone on good speakers or headphones, back in the day. But I’m an audio gearhead, so I spend hours obsessing over stuff like that. Most people couldn’t care less. What matters is the storytelling, which is just as effective, just as frightening.

There’s really not ample room here to list all my favourite episodes of Nightfall. All I can do is give you a primer, a handful of macabre tales to get you started. The whole series comprises a run of 100 shows, so there’s plenty of listening to be had. Plenty of audio terrors to relive. So, whether you listen alone or choose to gather the kiddies around the iPod dock and turn off all the lights, have a listen to this top-five list. Some of the best that Nightfall has to offer.

“The Tell Tale Heart“. Among Nightfall’s many adaptations of classic works, this, for me, is the finest. Everyone knows the Poe story; everyone knows how it ends. None of that matters. This is a well-crafted adaptation with strong performances and an impending pall of dread that falls as you listen. The first-person narrative of the central character is compellingly unbalanced as he slides into what almost seems a pre-meditated madness. You know exactly where it’s going and it freaks you out all the more.

I don’t hear “Late Special” mentioned much among Nightfall loyalists, but it’s one of my personal favs. After a couple is involved in a horrific car wreck, the wife, blinded in the accident, must seek help for her badly injured husband in the midst of a bitter snowstorm. Stumbling upon what at first appears to be an abandoned train station, she encounters a kindly old gent willing to help her…but perhaps not in the manner she’d prefer. I don’t want to reveal too much here, but there’s something about this episode that crawls under the skin and gives you the chills. Once again, top-notch acting.

Another Canadian blizzard, another couple in peril, this time in their own home in “The Porch Light“. A man and wife settling in for a long winter’s nap have their sleep disturbed by the faint glow of their porch light. What’s more eerie is the enigmatic figure on the porch, waving his hand in the frigid night air. Can he see them peering down from the darkened second-story window? Yeah, it gets weirder from there. What makes this story work so well is that it takes a believably mundane scenario and increasingly ratchets the tension and creep factor to a fever pitch by the climax.

“The Repossession” pits a man against his identical twin brother in a war of wills. Problem is…this evil twin died during childbirth and now his unborn soul craves the life he never had. Not for the faint of heart, folks. I understand this one lit up the CBC’s switchboard for its gore. You’ll hear things in this episode you could never see on network TV. The sound design here is particularly chilling.

You’d think a book penned in the bowels of Hell, with a first-hand account of the fiery torments awaiting the damned, might be a bestseller, right? Problem is, “The Book of Hell” is not so easily reprinted. In fact, all manner of earthly horrors await those that might try to publish this manuscript. Wonderfully written and dramatised by a fine cast. You come away feeling almost as if you’ve just heard something that maybe you weren’t supposed to hear.

I could mention many more, but these five episodes offer a solid jumping-off point. As the mysterious host, Luthor Kranst, would say, “Be careful of the edge.” If one doesn’t appeal to you, perhaps another will. There are plenty of terrifying tales to choose from. After all, Nightfall haunted the airwaves of Canada for three seasons, eventually migrating south to the U.S. via NPR during its initial run, where I discovered it as a boy. So, warm up your mp3 device of choice and set aside some quiet time in the evening as daylight fades, or perhaps during your daily commute and tune in the terrors of yesteryear. Who knew our neighbours to the north could be so freaking scary?