Audio horror went into eclipse as radio became increasingly irrelevant over the past couple of decades. Ironically, radio’s old rival, 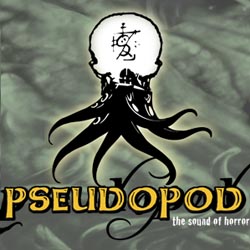 television, didn’t deal this blow to an older technology. Instead, cassettes, CDs, the Internet, and satellite radio gave people the opportunity to make their own choices and their own radio, and ignore the commercial broadcast variety. Radio itself didn’t help with the increasing focus on soulless format and pre-programmed broadcasts in the late 70s and early 80s. The heyday of radio fiction overlapped with the heyday of freewheeling DJs for good reason.

Even so, audio fiction did not completely die out with the demise of CBS Radio Mystery Theater in 1982. National Public Radio broadcast now-famous adaptations of The Hitchhiker’s Guide to the Galaxy, Lord of the Rings, Star Wars, and lesser-known series like the exotic and increasingly arcane Moon over Morocco, from the same folks who gave you last week’s Summer Screams entry, “Sticks”, a decade later (If you do hunt up Moon over Morocco, whatever you do, don’t read anything about it, first. It’s much more fun that way).

NPR has since disappeared up its own backside. BBC World Service regularly does drama, but it’s usually that boring contemporary urban Brits stuff. So, is anyone still doing radio horror?

Why yes, yes, they are. Thank you for asking. One of the fun things about the Internet (It turns out) is that you can make your own podcast online for dirt cheap. Many have capitalised on this to do all sorts of horror news podcasts, in many languages, and a few have chosen to do it to make new horror drama, either in audio book form or drama form.

Pseudopod: The Sound of Horror, the horror offshoot of well-known pro spec-fic audio market, Escape Pod, is one such project. It’s a weekly audio-zine that dramatises horror fiction from around the world and through the ages (with a strong emphasis on contemporary and public domain authors, for rather obvious reasons of copyright and such). There’s even a Lovecraft tale, “The Music of Erich Zann” (#100 – July 25, 2008) and a Lovecraft pastiche, “The Dude Who Collected Lovecraft” by Nick Mamatas and Tim Pratt (#172 – December 11, 2009). The zine is based in Georgia, though its current host, Alasdair Stuart, is English. Around since 2006, it celebrates its sixth birthday next month and today’s broadcast (It has one every Friday) was #291. That’s a lot of horror.

Pseudopod‘s format is straightforward audio book, for the most part. After a brief introduction by the host of the author, the story and the story’s copyright info (as well as a plug for some other site), a different reader reads a complete story each week (though there is some rotation of the same readers), voicing all of the characters. In addition to hosting, Stuart also sometimes doubles as a reader, as in entry #131 “Tales of the White Street Society – The Corpse Army of Khartoum” by Grady Hendrix (February 27, 2009). Initially, the editors read the story, as in the podcast’s first entry, “Bag Man” by Scott Sigler (August 11, 2006). Lately, the podcast ends with a meditation on a theme in the story by the host and another short ad. The entire thing lasts thirty minutes. With the exception of programmatic music at the beginning and end, there is no ambient music and there are no sound effects.

In addition, the story format tends to be quite different from the stricter format of radio drama. In old-style radio, there was a heavy emphasis on rising action in the traditional sense, with a final twist that came at or very near the end. To say that the usual denouement of a radio horror story is truncated would be an understatement. Pseudopod, on the other hand, reads its stories in their previous format, which can be all over the place. So, for example, there is a twist in Vincent Pendergast’s “The Rainbow Serpent” (#289 – July 6, 2012) and you know one is coming. But it comes about two-thirds of the way through and the story ends with a flashback, in true Ouroborous fashion.

Another difference is that radio drama is written in script format. Pseudopod does not adapt the stories it buys into scripts. It reads them straight out. This means that dialogue is far less important in the stories you hear in Pseudopod than it is in radio drama (where the entire story is told through dialogue and some judicious sound effects), while things like POV, which are irrelevant to radio drama, become important in an audio book, which is literary fiction read out loud. So, for example, you get a lot of stories told in the first person and even present tense, such as “The Moon and the Mesa” by Daniel Braum (#219 – December 31, 2010), with the dialogue and action embedded in the exposition, including attribution. Much of the horror is subjective, so that what you’re hearing is not as concrete as the old-style drama, where you get convincing sound effects to bring you round to the narrator’s side, no matter how nutty the narrator (like the madwoman in Light’s Out‘s “Murder Castle”, piping, “Revenge…revenge….”) may turn out to be. There are recent horror podcasts in the old radio drama format, but those are for another column and another week.

One big difference between Pseudopod and classic radio horror is the lack of censorship. The old radio horror dramas definitely pushed the limits of their times, but those limits were still tight. The stories in Pseudopod don’t have those boundaries. There are warnings on the site itself that this is adult material and they aren’t kidding. You’ve got R-rated language, violence, gore, and sexual content. If these stories were filmed as they are written, a lot of them would probably drop over into NC-17. That’s the beauty of print and print read as audio.

If you get a chance, go over to the site and browse through the stories. You can listen to them on the site itself, or download them for future listening. It’s all free, but they love donations. Give them a try at: http://pseudopod.org/.