It’s Friday the 13th and we’ve got a brand-new, Lovecraftian Summer Screams column for you from our publisher. 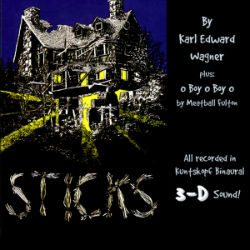 First of all, there’s Karl Edward Wagner, a writer of a bunch of stuff, but, for Lovecraftian purposes, the writer of “River of Night’s Dreaming” (1981) and the aforementioned “Sticks” (1974). Karl knew an illustrator called Lee Brown Coye, who did work for a number of spec publications, including Weird Tales. Coye tended to draw lots of…well…sticks, into his pictures.

And, as Wagner explained:

I had noticed that the ‘sticks’ only began to appear in his work for Ziff-Davis in the early 60s. Le finally sent me a folder of clippings and letters, far more eerie than this story – and factual.

In 1938 Coye did come across a stick-ridden farmhouse in the desolate Mann Brook region. He kept this to himself until fall of 1962, when John Vetter passed the account to August Derleth and to antiquarian-archeologist Andrew E. Rothovius. Derleth intended to write Coye’s adventure as a Lovecraft novelette, but never did so. Rothovius discussed the site’s possible megalithic significance with Coye in a series of letters and journal articles on which I have barely touched. In June 1963 Coye returned to the Mann Brook site and found it obliterated. It is a strange region, as HPL knew.

Cue in Wagner, who took the idea and wrote “Sticks”, a story about an illustrator who stumbles into an odd, abandoned house surrounded by these strange stick formations. Inside the house, he stumbles onto a, hmmm…well, ‘terrible horror’ would be the Lovecraftian way to describe it, I suppose. Years later, he is contacted by the estate of a Weird fiction writer to illustrate a volume of his stories. The house, the sticks and the horror of the past soon rear up their heads again.

Overall, “Sticks” is an homage to the writers of the Weird circle and Wagner referred to it as an “in-joke”. In terms of the plot, it’s not overtly brilliant and it can get a bit creaky. However, it still scared the pants off me when I first read it. Why? I think because of the little footnote that explained how it was inspired by a real story. Plus, there’s something subtly sinister about the whole tale, something that works better than all of its separate components.

Well, but what about the audio adaptation? Meatball Fulton (Thomas Manuel Lopez) adapted it in 1984 and that’s the version I’ll be talking about.

Lopez took a number of liberties with the original text, so his adaptation is not a copy of what’s on the printed page. The result is a story that is very nimble: The changes work perfectly for a dramatic radio presentation. Lopez also irons out some of the problems of the original, while preserving the seed of dread that made “Sticks” so interesting.

In the radio play, we have the same basic setup: an encounter with a bizarre house surrounded by sticks formation. Scary stuff happens. However, the radio play makes several changes to the story. Most important is the addition of a girlfriend for the protagonist. I know what you are thinking: Booo. But no! This is not just the addition of a girl in order to give the hero a love interest (and, if this were a movie, to add some extra sex scenes). She is an important character who enhances the narrative. The modified “Sticks” storyline is very, very good. Ain’t that a neat trick?

In terms of sound, the experience is beautiful. “Sticks” was recorded using a binaural microphone, which basically means sound comes from all sides. Things that should sound faraway sound faraway, noise moves from the left to the right, etc. It makes for a very fun experience and all the little touches (sound effects, bits of music) add up to a rather scary experience.

I won’t discuss the mechanics or the plot any further because I am hoping you’ll purchase the audio adaptation and take a listen for yourself.

The Blair Witch Project is supposed to be (loosely, I guess) inspired by “Sticks”, but if you want an adaptation that really takes the guts of Wagner’s story and builds upon them, you should stick with the audio adaptation.

Before I close out, I should mention that Radio Drama Revival also did a wonderful review of “Sticks” and you should check it out (but after you are done listening to the MP3, as it gets a bit more spoilery). I should also mention that – for the first time in many, many years – “Sticks” is easy to come by in print. You can buy the recent Wagner two-volume collection released by Centipede containing all his work. It’s also reprinted in The Book of Cthulhu 2 (out this fall).

“Sticks” is likely my favourite story inspired by Lovecraft’s Mythos and the radio play should be de rigeur for any afficionado of this type of stuff.