Words are not enough to express how much I love my weekly addiction, The H.P. Lovecraft Literary Podcast. Interpretive dance 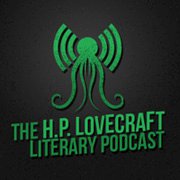 might do my deep feelings for it justice, but since you can’t see that, I guess words will have to do. The HPLLP is the Lovecraftian lovechild of two HPL fanatics, Chris Lackey and Chad Fifer. What they got into their warped minds to do was a weekly podcast where they would discuss each and every story Lovecraft ever wrote, in the order in which he wrote them. Now, if that were all there was to this, it would still be a very fine podcast – a little dry, probably, but fine. However, what these two produce consistently, week after week, is nothing less than pure Innsmouth gold.

Chris and Chad discuss each story with both great insight and (thankfully) humour. You can tell that not only are these two good friends – which makes for easy, lighthearted conversations between them – but they’re also true fans of Lovecraft. Like true fans, they can geek out over some things, yet still point out the flaws and foibles of HPL without it ever dampening their obvious appreciation for the man’s work. In addition to well-thought-out and funny discussions between these two, they often have guests join them in their critical analysis. Such big names in the Cthulhu world as Kenneth Hite, S.T. Joshi and even Re-Animator director Stuart Gordon have all guested on this show. That’s pretty darn cool. As if all that weren’t enough, each podcast has selected passages from the story in question, read by a variety of actors, Lovecraft fans, and people with just plain old nice-sounding voices. Oh, and did I mention that the dramatic readings are accompanied by thoroughly spooky mood music? Well, they are.

Again, let me stress how much I love this weekly show. It’s both hilarious and scholarly (a very rare combination), it’s about one of my favourite authors, the production values are sky high, there are often guest stars that I want to know more about – oh, and one more thing; IT’S ALL FOR FREE!

That’s right: hours and hours of entertainment. They are currently up to their 112th podcast, all for free.

So, if you are a fan of HPL, someone who’s heard of the Great Gentleman from Providence but have never read his stories and often wondered what all the fuss was about, or you just like entertaining podcasts in general, then you simple must go to The H.P. Lovecraft Literary Podcast and fill your MP3 player with eldritch horrors Man was never meant to know. Go now. Great Cthulhu commands it!