On December 5, 1943, the Mutual Broadcasting System ventured into a new realm of radio storytelling with The Mysterious Traveler, a 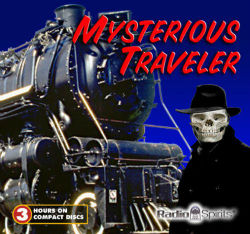 journey that spanned 370 episodes, spawning two spin-offs and several tie-ins before coming to an end on September 23, 1952.

Heralded by the shrieking of a train whistle, the show’s narrator (voiced by Maurice Tarplin) would greet the listener with the same introduction, delivered with just the right mix of aloof charisma and potential menace:

This is the Mysterious Traveler, inviting you to join me on another journey into the strange and terrifying. I hope you will enjoy the trip. That it will thrill you and…chill you a little. So, settle back, get a good grip on your nerves, and be comfortable – if you can!

The program was the brainchild of Robert A. Arthur and David Kogan, a pair of veteran radio authors. Collaborating since 1940, Arthur and Kogan had freelanced on a number of well-known radio series, such as Suspense and The Shadow, before writing and producing several successful shows for Mutual. Their first for the network, Dark Destiny, was a half-hour anthology program focusing on stories of the supernatural, airing 1942-1943; several of the duo’s 27 scripts were later recycled for The Traveler, a practice they’d repeat many times over.

In devising scripts for The Mysterious Traveler’s run, Arthur and Kogan would conceive the plots together – with Arthur no doubt drawing on his extensive experience in writing for such pulps as Black Mask and Amazing Stories – and then one would proceed to write. Arthur had a fondness for the horror tales, while Kogan preferred science fiction. Stories would sometimes delve into the crime and mystery genres, but the emphasis was always on the dark and macabre, more often than not concluding with an O. Henry-style twist. Kogan also handled directing duties for a cast that included Jackson Beck (perhaps best known for voicing Bluto for Max Fleischer’s Popeye cartoons), Lon Clark and Bill Johnstone (who took over for Orson Welles on The Shadow).

Following his standard introduction, Tarplin’s Traveler would then serve as story narrator for that week’s installment (Early entries usually featured the Traveler as a supporting character, a device that was soon abandoned), his nuanced delivery weaving through the story and sometimes carrying large blocks of exposition. Each episode would close with Tarplin remembering some lurid anecdote, interrupted right before revealing some pivotal detail – “Oh, you have to get off here? I’m sorry.” The show’s creators might’ve found this a clever way to leave audiences wanting more, but it always caused this writer to wonder just how long the Traveler would spin his gruesome yarns if left unimpeded, and if the listener had in fact reached his stop.

The Mysterious Traveler offered the usual pulp-inspired thrills, such as explorers uncovering lost worlds and the creatures that inhabit them (“Five Miles Down,” “The Black Door”), ghostly encounters (“No Grave Can Hold Me,” “Stranger in the House”), and mad scientists (“Green Death,” “The Big Brain”). Nor was there any shortage of monsters. In “If You Believe,” one of the series’ more accomplished entries, a newspaper reporter uses the public’s unshakable belief in print media’s veracity to generate a creature in a laboratory – a premise that, given the current trend in politically biased reporting, seems ripe for re-adapting.

Other notable episodes include “Behind the Locked Door,” wherein archaeologists trapped in a cave-in uncover evidence of a Gold Rush-era wagon train and, eventually, the feral descendants of the prospectors that still live within the caves, and “Death Comes for Adolph Hitler,” a somewhat daring tale that has an SS submarine sneaking Der Fuhrer to a South American hideaway, only to be overtaken by the vengeful spirits of Nazi war victims. Thankfully, it’s never specified whether the victims in question are Allied soldiers who died in battle or death camp detainees. This morale-boosting morality play was well-received enough that the show later remade it as “Death at 50 Fathoms.”

The Mysterious Traveler also provided one of old-time radio’s most disturbing outings with “The Good Die Young.” This story of a manipulative, possessive little girl who schemes to keep her father’s affections away from her new stepmother is uncomfortable enough without its final twist, when she’s inadvertently force-fed the poison she intended for Daddy’s new bride. (“It burns! It burns!” cries the child in her gurgling death throes.) Nearly seventy years after its initial broadcast ,the ending retains its unsettling impact.

Over the course of its nine-year run, the series proved to be quite popular with the listening public, inspiring along the way a digest-sized magazine published and edited by Arthur and Kogan, a comic book, and a television series, but none of these offshoots had the longevity of its originator. It also produced two spin-offs.

The first of these, The Sealed Book, ran as a replacement series on Mutual from March to September of 1945. Produced by Arthur and Kogan and directed by Jock MacGregor, the show recycled scripts from The Mysterious Traveler (usually under different titles), introduced by Philip Clarke as the cackling “Keeper of the Book,” a host that will be familiar to readers of a certain EC comic.

Despite a rushed production schedule and previously broadcast material, the show still managed to provide a few worthy episodes, like “The Hand of Death” and “Death Spins a Web” (The latter is a typical greedy-relatives-fight-over-the-will story, made memorable by a rather uncomfortable seduction between deceitful cousins).

The second offshoot, The Strange Dr. Weird, aired from 1944 to 1945, also reusing Traveler scripts, albeit in a shortened 15-minute format aimed at younger audiences. Maurice Tarplin resumed hosting duties as the titular Doctor, but this abbreviated incarnation seems to have not made much of an impression.

Despite the success of The Mysterious Traveler and its creators, the show came to an unfortunate end in 1953, when the House Committee for Un-American Activities deemed Robert Arthur and David Kogan part of a communist front via the Radio Writers Guild. Advertiser and affiliate pressure forced Mutual to cancel the show and end the writers’ careers in radio. Both men would continue in other forms of media – Arthur would go on to make a name for himself as ghost-editor for several Alfred Hitchcock mystery anthologies – but it was an unceremonious end to a fruitful, distinguished era.

You can buy CDs of The Mysterious Traveler from Amazon.com.