Return with us to the thrilling, chilling days of yesteryear for a summer full of radio terror. For 14 weeks, we’ll review 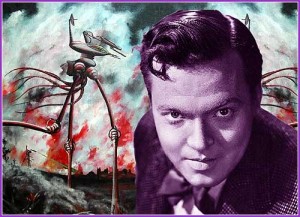 audio dramatisations of horror stories, both old and new. Some of the material will come from the Gentleman from Providence. Other reviews will look at other authors, both inside and outside Mythos.

First up – the granddaddy of reality TV, the pinnacle to which all other radio horror aspires, the original 1938 radio broadcast of H.G. Wells’ War of the Worlds.

You’re driving down the road, listening to the local radio station, when the music cuts off and a high-pitched whine, followed by a creepy burble, comes out of your radio. If, like me, you live in a state or province that recently was “blessed” with tornadoes, thunderstorms, a hurricane, and an earthquake, all in one week, you might get a little tense at this point. Even if you don’t, you might get tense, regardless, until the announcer comes on and reassures you that “this was only a test.”

Now, imagine that it’s 1938, the day before Halloween. You’re living in the Northeastern U.S. and you’re worried about invasion from Germany. You start roaming the dial during the first commercial break for The Chase and Sandborn Hour and suddenly, you happen upon a news report informing you that some unknown enemy is invading New Jersey with overwhelming force. And poison gas.

As with other examples of mass hysteria like the Victorian Springheel Jack or the WWII-era Mad Gasser of Mattoon, it’s still debated how extensive the panic was, but it is generally agreed that the 1938 broadcast of War of the Worlds, by short-lived program, Mercury Theatre on the Air and its 22-year-old head, Orson Welles, scared a hell of a lot of people a hell of a lot, somewhere between several hundred thousand to over a million. For a new, obscure radio show of the early 20th century, that’s impressive.

But is the broadcast scary today? Oh, yes. Sure, you know it’s not real, at least on an intellectual level. And one could argue that the overheated delivery in some spots seems a bit off the chain now. But the very structure of the first two-thirds, with increasingly panicky and disorganised news broadcasts as the Martians chew their way through the military, government and media, is highly effective. Welles’ adaptation (constructed, with revisions by Welles, by staff writer Howard Koch) doesn’t just update and translate Wells’ (no relation) story from late-Victorian England to late-Depression-Era America, imperial London to economically battered New York. It also very cannily and realistically extrapolates the effects of an alien invasion with vastly superior technology on American infrastructure at that time, and then reenacts it the way it might sound on the radio. Unsurprisingly, it’s catastrophic in a fashion that H.P. Lovecraft might have appreciated if he hadn’t already been dead for two years. There is nothing whatsoever that humans can do in the story and you can’t help feeling a certain despair when you reach the end, where a reporter chokes out his life on top of a building after narrating the Martian tripods’ unstoppable rampage through New York, followed by an Ishmael-like CB operator calling out to dead air.

The last third is just a narration by Welles of the latter part of the book, ending with Wells’ original happy ending (though “happy” is perhaps a matter of opinion). I have to be honest and say that this part is boring. Welles’ narration is both portentous and pretentious, and it completely kills the mood of the previous two-thirds. Plus, while the book’s ending works fine for the book, it doesn’t work so well for the radio broadcast.

The good news is that there was a commercial break between the two sections, so you don’t have to listen to Welles’ narration if you don’t want to. If you want to stop at the bleak sound of wind soughing over dead bodies, you can. And it’s probably just as well that the show had that section. While Welles intentionally copied previous fake broadcasts as a way to ramp up the creep and even scare a few of the more gullible in the first part, the show did begin with a disclaimer, had a disclaimer in between the two sections, and ended with a disclaimer, as well. Since the first part is the alien-invasion scifi equivalent of yelling “Fire” in a movie theatre, these measures probably limited the panic to just scaring a lot of people instead of causing criminally negligent death and mayhem, though the station did get sued by some of the more-frightened (or more-litigious) and the program had to promise never again to use the phrase: “We interrupt this program for an important announcement.” This did not stop Welles going on to a very prestigious career in film, or numerous remakes and reinterpretations by a host of others. The program even picked up a new sponsor, Campbell Soup, and changed its title to “The Campbell Playhouse” for the rest of its lifespan. It survived under that name until 1940.

The original War of the Worlds broadcast can be found at The Mercury Theatre on the Air website, along with other broadcasts from the program. Most of them are mystery or contemporary drama, but there are also a few horror and fantasy entries besides War of the Worlds, especially the program’s first broadcast that summer, Dracula. The site also includes a radio chat between H.G. Wells and Orson Welles from 1940 about the unexpected effects of the broadcast on the general public.