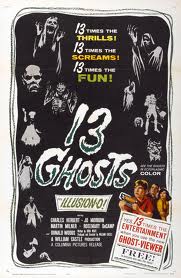 Welcome back to the Vault of Secrets, where, every month, we’ll be unearthing a classic (or not-so-classic) horror film for your delectation. Before we start tonight’s film, raise your hand if you’re familiar with William Castle. Probably anyone reading this column, but, just in case, he was a prolific and popular producer/director whose pictures were better known for their gimmicks than for the films themselves. Perhaps the most famous of those gimmicks was the one for The Tingler, in which buzzers hidden in select seats would give audience members a jolt during scary scenes of the movie. Tonight’s film isn’t one of his best-known, but it does have one of the best gimmicks (at least on paper). The movie is 13 Ghosts, and the gimmick is that audience members were given special “ghost viewers” (basically, oversized versions of the old 3D glasses of the red-and-blue variety) upon entering the theatre. The scenes in the movie that featured ghosts were shot with a blue filter, and the ghosts themselves were red. Hence, when audience members looked through one filter, they saw the ghosts. And when they looked through the other filter, ostensibly, they didn’t.

I didn’t have a “ghost viewer” while watching this, nor even a pair of old 3D glasses with which to surrogate the experience, so I can’t personally vouch for the effectiveness of the gimmick, but I have a feeling, based on watching the rest of 13 Ghosts, that it was probably a lot better in theory than execution.

See, 13 Ghosts is another movie that ought to be great. It’s got all sorts of things going for it that could have made it great, of which the “ghost viewer” gimmick is really only the least one. It starts with a grade-A spookshow opening that makes great use of the blue-and-red filters, complete with moans and screams and a catalogue of the ghosts, with a big drippy question mark where the thirteenth ghost should be. And the ghosts are pretty great. There’s a headless lion-tamer, a chef (with floating mustache!), kissing corpses, and a burning skeleton. Sadly, the movie never really does much with any of the ghosts save the lion-tamer and his lion. I know I’m the “Tell me less” guy, generally, but I really want to know more about those ghosts, or, at least, see more of them! (The mostly awful 2001 remake does at least figure this part out somewhat and names all its ghosts, even if the ghosts themselves are often less-than-overwhelming.)

After the opening titles, which are really as good as the movie ever gets, William Castle shows up and delivers his trademark explanation of the gimmick, which is always fun. Then we’re dropped into the story proper, where we meet the family of Cyrus Zorba (a completely wonderful name if ever there was one), who has just inherited a big, haunted house from his reclusive uncle, who collected ghosts. (Along with the house, he inherits a “ghost viewer” of his own that at least looks homemade, which I guess is something.) The reasons for the uncle’s ghost-collecting are left unexplained, as are exactly how he kept them, since they seem to just wander around his house. From there, it’s like a race to see how many opportunities to be more interesting than it is the movie can squander. Cyrus Zorba works in a museum and we meet him explaining about how fossils came to be found in the La Brea Tar Pits, which seems like a setup for some kind of thematic link to the ghosts, but, if it was intended to be, it’s never capitalised on.

Unfortunately, the ghost viewer, while a fun idea, kind of gets in the way, too. Turns out it’s hard to startle people when you have to tell them to put on their viewers first. And all the scenes with the ghosts are unfortunately few and far between, and uncomfortably cut off from the rest of the action, as a result.

As in Castle’s better-known (and just better, all around) House on Haunted Hill, the ghostly happenings are juxtaposed with purely human greed and murder, although, in this case, the ghosts are emphatically real and seemingly maybe even benign by the end. The cast is a roster of common players of the time, including then-popular child star Charles Herbert, who was also the kid in The Fly. Probably most interesting, though, is that Margaret Hamilton, the Wicked Witch of the West herself, plays the housekeeper-cum-medium, a character who would seem like a direct lift from the caretaker in The Haunting, if that movie hadn’t come out three years later.

That’s it for tonight’s program, but don’t forget to join us next time as we check out an island that seems to have misplaced its souls.