Welcome back to the Vault of Secrets, where we’ll be unearthing another classic (or not-so-classic) vintage horror film for your 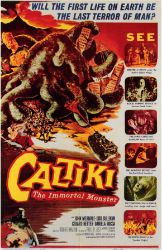 delectation. Tonight’s film is one I’ve been looking forward to watching for a very long time. Not only is it associated with the name of the great Mario Bava, who has provided fodder for several previous columns including Black Sunday, Black Sabbath, and Planet of the Vampires, but it also features a giant blob monster. Really, Caltiki kind of has it all: giant monsters, mummies, hidden temples, Central American folklore, mutations, radiation panic, and a little Italian horror gruesomeness. There’s even an early found footage segment.

The opening of the story could come straight out of Lovecraft, with a ravaged scientist stumbling from the jungle, half-mad and raving about a cave and a mummy and some sort of Mayan deity. His comrade is missing. When the other scientists go exploring, they find the same cave, with hidden steps leading down to a hidden pool at the base of a statue of the goddess Caltiki, to whom human sacrifices were supposedly offered. At the bottom of the pool are piles of human skeletons decked out in gold, but, when the scientists try to take the gold, they encounter a creature that they assume is the goddess herself, a giant unicellular organism like a huge amoeba that grows under the effects of radiation. (Now we’re in realms that sound a bit more like something out of Howard than Lovecraft. Where’s Conan when you need him?)

In typical ‘50s monster movie fashion, things wander around a lot from there before we get to the realization that the Mayans were driven out of their homes by a comet hundreds of years ago, the radiation from which caused the Caltiki monster to grow out of control. And of course, the comet is due back at just this very moment!

There are a lot of familiar bits in Caltiki, either things it echoes from earlier films or things that it prefigures. The wounded/mutated/infected scientist echoes The Quatermass Xperiment, while the giant blob creature at the end echoes Quatermass 2. The obsession with flamethrowers present in just about every 1950s big bug movie is prevalent here (Caltiki can only be destroyed with fire), and the monster itself seems as if it could have been the inspiration for the giant amoeba creature from the end of Evolution (2001).

The Caltiki monster actually looks really great, especially in the closing sequences of the movie. The effect used to create the creature looks as if it might have been achieved by having a bunch of people move around under a pile of damp leathery blankets or rags, but it works amazingly well, giving the movement a genuinely organic feeling and making the texture of Caltiki appear disquietingly flesh-like. By comparison to the previous year’s The Blob, Caltiki is unexpectedly gruesome, especially when it encounters a victim, whom it eats away. (Earlier in the film, it’s said that the victims are mummified, but I don’t really know how mummified they look later. It’s pretty gross, for a movie from the ‘50s.)

Mario Bava is often credited with having directed Caltiki, but his name’s not the one in the credits. The one in the credits is, in fact, ‘Robert Hamton,’ but that’s actually Riccardo Freda, who, by most accounts did the actual directing, with Mario Bava stepping in to finish the film. (The two also worked together on I, Vampiri a few years before.) That said, the finished product certainly wouldn’t look out of place in Bava’s filmography.

That’s it for tonight’s program, but join us next time when we leave Central America and head to New Mexico with Val Lewton in pursuit of a killer that might be a leopard, or might be a man.