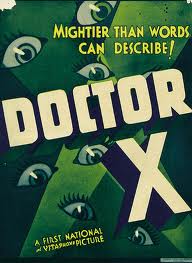 Welcome back to the Vault of Secrets, where every other week, we’ll be unearthing a classic (or not-so-classic) vintage horror film for your delectation. Tonight’s installment is Doctor X, directed by the great Michael Curtiz (best known for Casablanca), and starring Lionel Atwill and a pre-King Kong Fay Wray. The version I watched is from the Hollywood Legends of Horror Collection, which we’re now halfway through our coverage of.

Doctor X is one of only a handful of surviving movies that were filmed in “two-strip Technicolor,” in order to fulfill Warner Brothers’ agreement with Technicolor. Going against the agreement, however, two versions of Doctor X were actually shot side-by-side, with only minor differences in takes. The Technicolor version was thought lost until recently, when it was restored by the UCLA Film Archive. That’s the version that’s in the Hollywood Legends of Horror Collection, and the one that I watched.

While Doctor X isn’t the best film in the collection, it might well be my favourite of the bunch. The “two-strip” process gives the film a weird, lurid, pulpish color scheme that actually works brilliantly in complimenting its subject matter. I’ve heard people say that Doctor X is as close as you’ll ever come to seeing a pulp horror magazine brought to life, and that may well be so.

The storyline concerns a series of brutal killings being perpetrated by the cannibalistic Moon Killer on the nights of the full moon, and the titular Doctor Xavier’s attempts to ferret out the murderer by reenacting the killings in his creaky seaside mansion. There are all the usual trappings you could ever ask for, from hideously deformed stranglers to creepy butlers to mad science of every stripe, and Doctor X’s house is filled with long hallways, dark shadows, and all the beakers and lightning machines that are the staples of the mad science genre. There’s a great rogues gallery of suspects, as well as a bumbling newspaperman played by Lee Tracey, gamely ad-libbing many of his lines and scenes. The rest of the film’s comic relief is supplied by the nervous maid, played by Leila Bennett, who we last saw playing basically the same character in Mark of the Vampire.

What really makes Doctor X great, though, is how thoroughly and unabashedly it manages to be everything pulpy all at once. There are mad scientists with big, ridiculous machines, gimmicky serial killers, brains in jars, a whodunit in a big dark house, a locked-room murder, a morgue scene, a skeleton closet, and everything else you could ever ask for. They even manage to work in some wax figures (which apparently melted under the hot lights of the Technicolor filming process and so, actors were asked to play them by standing very still; you can actually see one of them move a little bit in a closeup). And since Doctor X is Pre-Code, it features references to cannibalism, rape and prostitution that would have been scrubbed from later films.

That’s it for this installment of the Vault of Secrets! Be sure to join us next time, when we resume our exploration of the Hollywood Legends of Horror, with Humphrey Bogart in the sequel-in-name-only, Return of Doctor X!