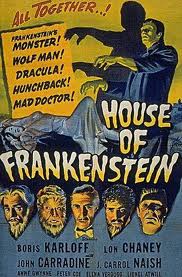 Welcome back to the Vault of Secrets, where, every other week, we’ll be unearthing a classic (or not-so-classic) vintage horror film for your delectation. Tonight’s movie is House of Frankenstein, directed by Erle C. Kenton and starring all sorts of familiar names, including Boris Karloff, Lon Chaney Jr., John Carradine, J. Carrol Naish, Lionel Atwill, and George Zucco, among others. The version I watched is on the Frankenstein Legacy Collection.

Two classic Universal monsters had met up the previous year in Frankenstein Meets the Wolf Man, but House of Frankenstein, conceived as a direct sequel to that film, is the first of what would be called Universal’s “monster rally” movies, featuring several of their famous monsters all in the same picture, an approach that would later be used in House of Dracula (which we’ll talk about next time) as well as other films like Abbot and Costello Meet Frankenstein, Monster Squad, and Van Helsing, to name a few.

House of Frankenstein tells the story of Doctor Niemann, played to maniacal perfection by Boris Karloff, seeming to have a lot of fun being on the other side of the mad scientist/monster equation, whom we first meet in prison, where he’s rotting away for trying to put a human brain in the body of a dog. Niemann is obsessed with the late Baron Frankenstein, whose notes he believes would be all he needs to perfect his own work. He’s also obsessed with getting revenge on the people who “wronged” him and put him in prison.

A freak storm helps him to break out, along with the hunchbacked Daniel (J. Carrol Naish), who naturally becomes his assistant. Together, the two of them encounter a traveling Chamber of Horrors run by Professor Lampini (George Zucco), who has in his show the skeleton of Count Dracula (John Carradine). Well, in no time, Niemann has had Lampini murdered and assumed his identity, and pulled the stake out of Dracula’s heart in order to get him to do his dirty work. This goes as poorly as you might expect, since Dracula can’t seem to go even one night without macking on the granddaughter-in-law of his intended target, and we end up with a carriage chase where Niemann double-crosses Dracula, who perishes with the rising of the sun. And we’re less than halfway through the movie!

From there, Niemann and Daniel pick up a stray gypsy girl (naturally) before heading to the castle that was destroyed by a flood at the end of Frankenstein Meets the Wolf Man, where they find both the Frankenstein Monster (Glenn Strange) and the Wolf Man (Lon Chaney Jr.), frozen in blocks of ice. They thaw them out and head to Niemann’s own castle, where he plans to continue his experiments and get his revenge. Man, and there’s way more plot, too, including love triangles and double-crosses and so on. And if that sounds like a lot to cram into a 71-minute movie, you’re not wrong. Apparently, the plan was originally to include even more monsters, but they were dropped for budgetary reasons. It’s a little mind-boggling to imagine how packed-to-the-gills this movie could have become.

House of Frankenstein has a little of everything – I’m particularly partial to the scenes in the Chamber of Horrors with the staked skeleton of Dracula – but it’s really kind of a hot mess. Weirdly, for a movie whose whole shtick is to put all the monsters together, they pretty much don’t share any screentime. Dracula is dead and gone before the Wolf Man or Frankenstein’s Monster shows up, the Wolf Man’s whole story plays out between him and the gypsy girl (with the requisite torch-wielding mob thrown in), and the Monster stays strapped to a bed and more-or-less comatose until the last couple of minutes. Really, it almost feels like a monster anthology film, with Doctor Niemann as the framing story that connects the other (otherwise unrelated) tales together.

It’s a blast as a sort of quick-and-dirty summary of all the clichés of the three monsters that it pulls from, but as a narrative, it kind of flops. It’s full of nice moments, though, and makes for great Halloween viewing.

That’s it for tonight’s installment of the Vault of Secrets, but next time, we’ll be following this up the same way Universal did, with 1945’s House of Dracula.