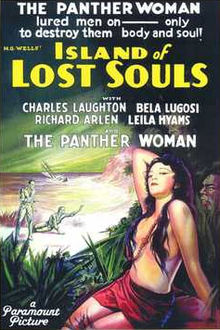 Welcome back to the Vault of Secrets, where, every month, we’ll be unearthing a classic (or not-so-classic) vintage horror film for your delectation. Our last few installments have featured movies that were probably camped in the less respectable end of our spectrum, but tonight’s film is bona fide, as evinced by its recent (and highly anticipated) Criterion release: Erle C. Kenton’s Island of Lost Souls.

Island is the first of several (though not as many as you might expect) film adaptations of H.G. Wells’ The Island of Dr. Moreau. In addition to Kenton (who would later go on to direct both House of Frankenstein and House of Dracula) behind the camera, the film also boasts a screenplay by Phillip Wylie, himself a science fiction author maybe best known for his novel, When Worlds Collide, which was adapted into the 1951 George Pal film of the same name.

Watching Island of Lost Souls, it’s easy to see why it’s so well-regarded. The visual style is murky and threatening, rich with expressionistic shadows, and the film abounds with Pre-Code weirdness, including Dr. Moreau’s frank plans to breed his animal-people with normal humans, or a genuinely unsettling scene in which his creations wreak their revenge on their tormentor. In the UK, it was denied a certificate by the British Board of Film Censors until 1958. It probably also doesn’t hurt that the film has proved fertile ground for inspiring musical acts, ranging from Blondie to Devo, Oingo Boingo to Van Halen. There was even a “horror-rock/punk/metal” (as Wikipedia puts it) band called “MANIMALS” that based their entire stage presence on Island of Lost Souls.

While the advertising of the time focused on the “Panther Woman” character (played by newcomer Kathleen Burke, whose brief Hollywood career was stultified by typecasting from that point forward), the real star of the show is Dr. Moreau himself, played by Charles Laughton (of The Old Dark House and many others). Laughton’s Moreau has an almost childlike air of menace and sleaziness, a diabolical quality that he at first hides behind a mask of seeming gentility and then doesn’t bother to hide at all.

Bela Lugosi is also in the movie, however briefly, hidden under some yak fur (or something) as the Sayer of the Law, who gets the film’s best and most oft-quoted lines (“Are we not men?”), but doesn’t have a lot more to do. The story goes that Lugosi was paid less than anyone else in the cast, in spite of being relatively fresh off his biggest role of all time in Dracula, because he was in the midst of bankruptcy.

While Laughton’s Moreau was the high point of the movie for me, the scenes with the Sayer of the Law and the animal people are the ones for which the film is best remembered. In addition to the iconic chanting of the law, which is most likely familiar even to people who have never heard of the film, the beast-folk are comprised of a varied bunch of makeup effects, and there are scads of them, filling crowd sequences with leering faces, and providing a shadowy, shifting presence in the background of other scenes, doing much to lend the film its air of consistent menace. Helping this along is the “language” of the animal people, compiled by sound engineer Loren Ryder from a mixture of animal sounds and foreign languages, played backwards at alternating speeds. The results supposedly induced nausea in theatre audiences of the time. Ryder would go on to do sound work for movies like War of the Worlds, Rear Window and The Ten Commandments.

That’s it for tonight’s installment, but be sure to join us next time when we leave earth behind entirely for a trip to the Planet of the Vampires.