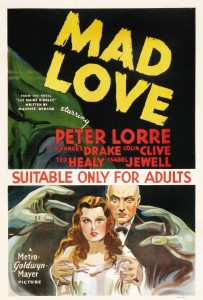 Welcome back to the Vault of Secrets, where, every other week, we’ll be unearthing a classic (or not-so-classic) vintage horror film for your delectation. Tonight’s movie is the last film in the Hollywood Legends of Horror Collection, and is probably the closest thing to a true classic in the set (Feel free to correct me if I’m wrong). Mad Love is directed by Karl Freund (who also directed The Mummy for Universal) and stars the great Peter Lorre in his first American role. Frances Drake is there, too, and Colin Clive (probably best known as Henry Frankenstein in the original Universal Frankenstein pictures), but it’s really Lorre’s show.

While it isn’t quite Frankenstein or Dracula, Mad Love plays off a popular theme. Based on the novel, The Hands of Orlac by Maurice Renard, Mad Love was already a remake of a previous film adaptation from 1924 that retained the novel’s title. It was later directly remade in a 1960 version (also called “The Hands of Orlac”), featuring Christopher Lee, and variations on the film’s basic plot have cropped up in movies like Hands of a Stranger (1962) and even Body Parts (1991).

The story concerns a concert pianist named “Stephen Orlac” (Colin Clive), who loses his hands in a train wreck and has them replaced with the hands of a killer. The surgeon who does the replacing, Dr. Gogol (Peter Lorre), is obsessed with Orlac’s wife, who was an actress at the “Theatre des Horreurs”, where he watched her perform every night. The killer’s hands seem to remember how to throw knives and Orlac even thinks they “want to kill,” a belief that Dr. Gogol exploits to try to separate Orlac from his wife.

The plot may seem a little thin, especially after having been so often repeated, but it shines in the execution. Mad Love opens strong, with a host of great visual moments in the introduction of the “Theatre des Horreurs”, and Lorre’s appearance and performance as Gogol are iconic in the very truest sense of the word. While Gogol may not be as instantly recognizable as Frankenstein’s monster or Dracula, he isn’t (or shouldn’t be) far behind. The costume designers do a great job, both in Gogol’s normal wardrobe and later, when he shows up in an elaborate disguise to try to manipulate Orlac. Lorre owns the performance, especially as Gogol’s grip on sanity begins to really slip away.

That rounds out our coverage of the Hollywood Legends of Horror Collection. Thanks for sticking with it and be sure to join us next time for something completely different!