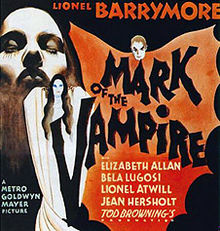 Welcome to the Vault of Secrets, where, every other week, we’ll be unearthing a classic (or not-so-classic) vintage horror film for your delectation. Tonight’s installment is Mark of the Vampire, directed by Tod Browning and starring Bela Lugosi, Lionel Barrymore, Lionel Atwill, and Carroll Borland. The version I watched is from the great Hollywood Legends of Horror Collection, which is one of the best collections of its kind, for my money, and which we’ll be running down for the next five installments of this column, as well.

As a lover of vintage horror cinema, I could have chosen from scores of classic films to start this column out right. But, instead of any of them, I picked this weird thing.

Before I say one more word about tonight’s movie, though, a warning: I’m going to spoil the ending. It’s got a twist that’s a little controversial and it’s almost impossible to talk about the movie without giving it away, so give it away I shall. If you’d rather see this picture unspoiled, I can tell you in advance that, while it may not be a classic of the genre, it’s certainly worth watching. And, since it clocks in at only 61 minutes, you won’t be wasting very much of your time even if you disagree!

Okay, if you’re still with me, let’s begin. Mark of the Vampire is, as I said, a pretty weird little flick, for all sorts of reasons. First off, it’s basically a remake of Tod Browning’s famous lost silent film London After Midnight, which is best remembered for Lon Chaney’s iconic vampire makeup and costume, even though the film no longer exists in any complete cut. Mark of the Vampire changes quite a bit from that movie, but seeing as how it’s a lost film, this is probably still as close as we’ll ever come to seeing what it was like.

Tod Browning is best known for directing the Universal Studio version of Dracula, which he did just a few short years before Mark of the Vampire. In fact, Mark of the Vampire has a lot in common with its much-more-famous cousin, including several sets that, if not the exact same ones that were used in Dracula, may as well be, while Lugosi is basically reprising his role from that film, though this movie’s Count Mora doesn’t talk much and has an unexplained bloody wound in his temple (more on that later). Rather than an immediate follow-up to Browning’s success with Dracula, though, Mark of the Vampire was actually made right after the release of Browning’s passion project Freaks, which is now remembered as probably his greatest film, though at the time, it didn’t do so well at the box office.

Because of the failure of Freaks, Browning lost a lot of clout and couldn’t prevent the studio from making a lot of cuts to his original version of Mark of the Vampire. According to some sources, as many as twenty minutes may be missing from the final cut. The content of these scenes is, of course, unknown, but supposedly included incestuous themes between Count Mora and his daughter Luna (Carroll Borland), as well as the explanation that Count Mora had killed himself, thereby accounting for the bloody bullet wound that he sported. Also, there was supposedly even more comic relief from Leila Bennett as the maid. If you’ve seen the movie, you may wonder how that was possible.

Although Mark of the Vampire is a rather awkward movie, it’s actually surprisingly fun to watch. It has more than its fair share of creaky charm, including lots of mist-shrouded graveyards, rubber bats, and traditional spookhouse comic relief (including a nice bit with a suit of armor). An able cast helps things along, especially the excellent Lionel Barrymore, taking on the film’s Van Helsing slot as Professor Zelen. Barrymore would shortly re-team with Browning on The Devil Doll, which we’ll be revisiting for a later installment of this very column.

The whole production hinges on a twist ending that is probably make-or-break for your enjoyment of the film. It’s certainly the kind of ending that will generally earn my animosity, as we learn that the vampires aren’t real at all, but are, instead, all actors attempting to gaslight the true culprit into revealing his guilt. The twist sort of comes out of thin air in the movie, maybe because, at least as the rumour goes, the actors didn’t even know that it was coming until the last minute of filming, but I think it works, even if some parts of the explanation do stretch credulity a bit (So, yes, he drained the blood with a heated glass, but where did he put it? In his pockets?). Mostly, though, it’s salvaged by a great gag at the end with Lugosi and Borland.

That’s it for this installment of the Vault of Secrets, but for more fun with Mark of the Vampire, you can check out the trailer over at Trailers from Hell, with a commentary by Jon Landis. Watch the trailer without the commentary first, though. It’s a lot of fun, and Bela Lugosi talks way more in it than he does in the actual movie. And be sure to visit us next time, when we continue our tour of the Hollywood Legends of Horror, with Boris Karloff in the incredibly problematic Mask of Fu Manchu!

Bio: Orrin Grey is a skeleton who likes monsters. His stories of cursed books, mad monks, and ominous paintings have appeared in Bound for Evil, Delicate Toxins, and, of course, at Innsmouth Free Press, among other places. He can be found online at www.orringrey.com.