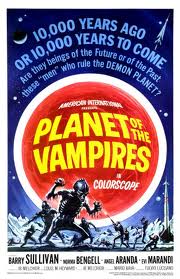 Welcome back to the Vault of Secrets, where, every month, we’ll be unearthing another classic (or not-so-classic) vintage horror film for your delectation. Tonight’s film is Mario Bava’s Planet of the Vampires, a movie that’s probably most famous for having supposedly inspired Alien, although both Ridley Scott and Alien scribe Dan O’Bannon claim to have never seen it at the time that Alien was being made.

It certainly opens in relatively Alien-like fashion, with a couple of ships following a mysterious transmission to an unknown planet. (And there’s an early shot of the tail of one of the ships that demonstrates an almost uncanny resemblance to the crashed ship from Alien.) Once they’re on the planet, though, things go a pretty different direction. It seems that the planet is home to some bodiless lifeforms that exist on some different “vibratory frequency” than humans. These lifeforms are the titular vampires, though the word is never used in the movie. They can take over the bodies of the humans anytime they’re unconscious, and they also take over the bodies of those that have died. (There’s a very nice scene of the “vampires” rising from their graves.)

The notion of bodiless creatures that take over dead bodies is actually pretty old-school folkloric vampire stuff (not too surprising, given Bava’s approach to vampires in Black Sunday and Black Sabbath), but the “vampires” here don’t do anything else terribly vampiric, not even drinking blood. Then again, maybe I’m reading too much into the title of a movie that was supposedly also released as Planet of Blood, The Haunted World, Terror in Space, and Space Mutants, to name a few.

Planet of the Vampires was a co-production between American International Pictures (the same folks who produced the many Vincent Price/Roger Corman Poe adaptations, as well as seemingly the majority of the other genre flicks of the era) and Italian and Spanish production companies. The actors were from all over the place, including America, Brazil, Italy, and Spain. On set, they all spoke in their native languages, and their voices were dubbed over accordingly into whatever language was needed for the film’s release. The English-language version (which is the one I watched) features writing credits from Ib Melchior (Death Race 2000, Reptilicus, Robinson Crusoe on Mars, etc.) and Louis Heyward, who was better known as a producer, though he did do some writing on other films, like an uncredited turn on Dr. Goldfoot and the Bikini Machine. It also features pretty much everyone dubbed, except for American lead Barry Sullivan.

In spite of an extremely tight budget, Planet of the Vampires actually looks fairly great, thanks almost entirely to Mario Bava, whose fingerprints are all over the visuals of the movie. Pretty much everything is lit with Bava’s signature candy-colors, which works especially well in an eerie sci-fi setting. The scenes of the astronauts exploring the planet are all particularly good, with loads of Schufftan process shots being used to make it look like the actors are interacting with various models. According to Bava, the planet’s surface was made using “a couple of plastic rocks,” various mirrors, and a lot of smoke. The result is remarkably effective. The high point of the visuals (and of the movie in aggregate) comes when the astronauts go exploring and find a ruined alien ship, complete with the skeletons of its giant alien crew. As you can imagine, this is also the place where the film’s resemblance to Alien is most pronounced.

While I’m on the subject of how the movie looks, though, it wouldn’t do to go without mentioning the costumes. The astronauts sport wonderful leather-looking spacesuits done in black with yellow piping that really should be more popularly known than they are. Not only do they look fantastic, but they also sport ridiculous high collars and pull-up skullcaps/hoods that give nice visual nods to more classicly gothic vampire films.

Sadly, Planet of the Vampires isn’t terribly eventful, and the dialogue is about what you’d expect from guys with Reptilicus and Dr. Goldfoot and the Bikini Machine on their resumes, but I’m still surprised that the movie isn’t more of a cult hit than it is. Bava’s visuals alone set the bar for it well above average for this kind of picture, and the Alien tie-in (however tenuous it may or may not be) provides a nice hook.

That’s it for tonight’s program, be sure to join us next time when we take a look at an old Hammer favorite (along with a special surprise) just in time for Halloween!