Welcome back to the Vault of Secrets, where, every other week, we’ll be unearthing a classic (or not-so-classic) vintage horror film 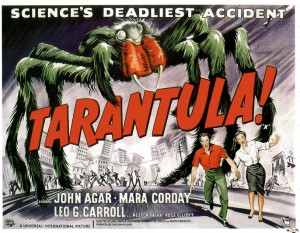 for your delectation. For the next couple of films, I’m going to be doing something very different from our last few installments. We’ll be jumping ahead a couple of decades to look at two of the (many) sci-fi monster movies of the 1950s, starting with Tarantula, the second of the “big bug” movies after 1954’s Them!, and, by all accounts, one of the better ones. I didn’t care much for it, but then, I don’t think these 1950s sci-fi flicks are really my thing, so your mileage is likely to vary.

Tarantula is directed by Jack Arnold of Creature from the Black Lagoon fame, and stars John Agar and Mara Cordray, who would later appear in a couple of other movies about big monsters, specifically, The Black Scorpion and The Giant Claw. The version I watched is from the Classic Sci-Fi Ultimate Collection, where it shares a disc with The Mole People, which we’ll be talking about next time.

Unlike a lot of vintage horror fans, I didn’t grow up with any of these movies. What I had instead were the Crestwood House Monster Books. They had an orange series, that tackled some of the most classic monster movies, and they also had a purple set that delved into the ever-so-slightly more obscure titles. I devoured all these books as a kid, so when I set out to pick some sci-fi monster films from the 50s for this column, I thought I’d knock out a couple of movies I remembered from the purple book series. Tarantula and The Mole People were the winners, partly because they were both on the same disc, which seemed convenient.

Tarantula, unsurprisingly, tells the story of a scientist whose attempts to create a synthetic nutrient to cure world hunger result in a giant tarantula that gets loose in the desert and tromps around, eating cattle and throwing trucks. At least, that’s the basic storyline. As with so many monster movies, what we actually get are a lot more scenes of John Agar as a country doctor, wandering around and making cryptic (“In the desert, sometimes things just happen.”) and chauvinist (“Give women the vote and look what you get: lady scientists!”) remarks.

The giant tarantula is mostly brought to life by using an actual tarantula, crawling around on models or inserted into shots with matte-effects. It looks pretty good, actually, but it’s usually dark, and the tarantula spends the majority of its time crawling across featureless desert landscapes. There are none of the money shots I was hoping for of a tarantula wreaking havoc on a miniature town, much to my dismay. The tarantula does smash one house, but that’s about it.

For close-ups, they do use a model, but you generally only see the mouth, which makes it a lot more effective than you’d think from the billions of full-body pictures of the (pretty ridiculous) model that are all over the place, including the film’s ad campaign and the menu screen on the DVD.

Besides making a big tarantula (and some big guinea pigs and rats), the nutrient serum also gets injected into some humans (of course!) and, rather than making them grow huge, turns them into weird mutants. (The movie says they have advanced acromegalia, but it looks more like they’re just melting.) The makeup on the mutants is done by Bud Westmore, who worked on The Creature from the Black Lagoon, as well as our next movie, The Mole People, and scores of others, and they look great! So good, in fact, that it sort of makes me wish we’d been watching a movie about weird mutants in the desert, instead.

That’s it for tonight’s installment of the Vault of Secrets! Next time around, we’ll be rejoining John Agar (and Bud Westmore) for The Mole People!