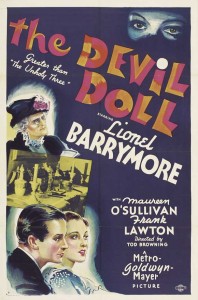 Welcome back to the Vault of Secrets, where, every other week, we’ll be unearthing a classic (or not-so-classic) vintage horror film for your delectation. Tonight’s movie is The Devil-Doll, which re-teams director Tod Browning and star Lionel Barrymore, whom we last saw together in our first installment, The Mark of the Vampire. The version I watched is once again from the Hollywood Legends of Horror Collection, and is the second-to-last movie from that set we’ll be covering here.

The Devil-Doll is a movie that has absolutely no right to being even half as good as it is. The premise sounds absurd. Lionel Barrymore plays Paul Lavond, a man falsely convicted of theft and murder, who breaks out of prison after 17 years to clear his name and have his vengeance on the three men who framed him. Nothing too outlandish, yet. The thing is, he breaks out with the help of a scientist who has perfected a way to shrink people and animals to one-sixth their size, except that, when he does so, their brains are wiped clean and they have no will of their own, only responding to the mental commands of a normal-sized person. When the scientist dies of a heart attack, Lavond joins forces with the man’s widow (Rafaela Ottiano, sporting a shock of white hair not dissimilar to the one Humphrey Bogart had in our last installment, The Return of Doctor X) to use the miniaturized people to get his revenge. Okay, that’s getting a little ridiculous, but when you add to it the fact that Lavond’s disguise involves pretending to be a little old lady running a doll shop, you can see why I dubbed this movie “The Murderous Mrs. Doubtfire”, and also why it doesn’t seem like it should work.

But, weirdly enough, it does and much of the credit has to be laid on the shoulders of Barrymore. He was impressive enough in Mark of the Vampire, but here he really shines, bringing to life both Paul Lavond and Madame Mandalip, his kindly old lady alter-ego, and switching between the two with gusto.

Most of the miniaturization effects actually hold up surprisingly well, also, though they don’t occupy very much of the film’s running time. In spite of what the title would imply, the miniaturized people and the crimes they commit are a small portion of the plot, compared to Lavond’s desire to clear his name, and to reconcile with his now-grown daughter (Maureen O’Sullivan, who played Jane in a slew of Tarzan movies), who hates him for what his notoriety has done to his family. Though The Devil-Doll is ostensibly a horror film, it feels much more like a drama, with our sympathies always resting clearly with Lavond and his daughter. Really, only the miniaturized people and the revenge plot push it into horror territory.

Whatever its genre, though, it’s a remarkably capable film, especially given its rather preposterous-sounding premise. The credits say it was adapted from the novel Burn, Witch, Burn! by A. Merritt, but from the synopses I’ve read, the adaptation was apparently a pretty loose one.

That’s it for this installment of the Vault of Secrets! Be sure to join us next time, when we round out our investigation of the Hollywood Legends of Horror Collection with probably the most classic film in the set, starring the great Peter Lorre in his first American role!