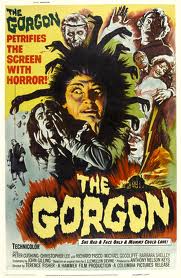 Welcome back to the Vault of Secrets, where, every other week, we’ll be unearthing a classic (or not-so-classic) vintage horror film for your delectation. Tonight, we’ll be looking at another Peter Cushing/Christopher Lee pairing, though this one’s not exactly a jewel in the Hammer horror crown.

The Gorgon is something of an odd departure for Hammer, turning, not to the monsters popularised by the Universal pictures of previous years, not to Satanism (The Devil Rides Out), nor magic (The Witches), nor some newly-minted creature (The Reptile), but rather, pillaging Greek mythology and transplanting it to Hammer’s usual Gothic castles. There are a lot of familiar-looking matte paintings and sets (as usual) in The Gorgon, even if the titular monster is perhaps a bit out of place among them.

As I already implied, The Gorgon isn’t exactly top-end for Hammer fare, most of the blame for which can probably be laid at the feet of the screenplay. It’s oddly structured, with its dizzying succession of doomed protagonists, and both the central mystery and the title monster are less-than-impressive. The lunging snakes of the Gorgon are particularly laughable and, more so than probably any other Hammer monster, tend to get snickers out of audiences any time I watch the movie with other people.

Fortunately, The Gorgon still has Peter Cushing and Christopher Lee, who can haul almost any movie into the realm of being at least tolerable, and it’s still a Hammer movie, which is more-than-capable of making up any remaining discrepancies. Cushing is more restrained than usual, here, playing a character whose emotions are constantly seething just below his placid exterior, and he gets to display something of his always-surprising physicality near the end of the picture, when there’s a swordfight in the wonderful ruined castle. The Gorgon‘s real secret weapon, though, is Christopher Lee.

Sporting an unusual look and playing way, way against his established type, Lee is not only one of the good guys, here, but his Professor Meister completely steals the show once he finally appears. This happened to be the first movie I ever saw (years back, now) that demonstrated Lee’s range. Prior to this, I was accustomed to his ominous and stoic turns as monsters and villains, and seeing his dynamic turn as Professor Meister was something of a revelation for me. (One that’s since been born out many times.)

Aside from Cushing and Lee, The Gorgon also has all the other qualities that I’ve come to expect from Hammer films. There’s a succession of classy supporting actors, a lovely leading lady (of course), and the usual attention to detail in sets and aesthetics. The castle that the Gorgon haunts, with its decaying statues and dusty cobwebs, looks like it could have dropped straight out of a Mike Mignola drawing. Which naturally endears it to me, somewhat.

That’s it for tonight’s installment. Join us next month, when we’ll be changing our format just a little bit here at the Vault of Secrets.