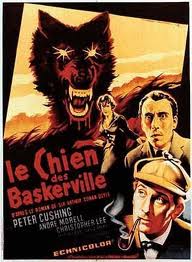 Welcome back to the Vault of Secrets, where, every other week, we’ll be unearthing a classic (or not-so-classic) vintage horror film for your delectation. Tonight’s installment is a Hammer classic pairing – Peter Cushing and Christopher Lee – but it isn’t a Dracula or a Frankenstein or even The Mummy. Instead, it’s an adaptation of the famous Sherlock Holmes novel The Hound of the Baskervilles, with Peter Cushing playing Holmes for the first time (but not the last) in his career.

Cushing isn’t the most famous face of Sherlock Holmes. Even among his many characters, Holmes isn’t the one for which he is best known. But when I try to picture Sherlock Holmes, as often as not, it’s Cushing’s face that I see and this movie is a big part of why. I’m not as much of a Holmes aficionado as many of the people I know, so I don’t feel that I’m qualified to judge how well Cushing plays the character. But as for his role in this movie, and as it stacks up against Cushing’s other parts, he’s at the top of his game here. While his Holmes isn’t quite as good as, say, his Baron Frankenstein at its best, it’s still a great role and it’s great to watch one of my favourite actors acquitting himself so nicely.

He’s ably supported by Andre Morell (who would later do great work as the lead in The Plague of the Zombies) as Watson and, of course, Christopher Lee playing somewhat against his usual type as Sir Henry Baskerville.

I’m no better able to judge how true the movie is to the book than I am how good of a job Cushing does as Holmes, but again, judged on its own merits, the movie is good Hammer fare. Whether or not it technically counts as one of Hammer’s Gothic horror pictures is perhaps up for some debate, but it certainly has a lot of the trademarks, including the usual opening credits with dramatic music playing over a matte painting of a castle (in this case, Baskerville Hall). The backstory involving Sir Hugo is also rendered very appropriately Hammer-ish. It is vaguely reminiscent of the very effective opening scenes of the later Curse of the Werewolf. It makes sense, as Hound was directed by Hammer veteran Terrence Fisher, who helmed pretty much every movie I’ve mentioned here, as well as a host of other Hammer horrors, including our next installment, The Gorgon.

The Hound of the Baskervilles is available at Amazon.com