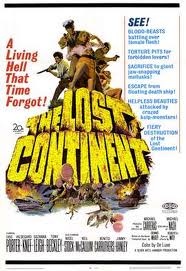 Welcome back to the Vault of Secrets, where, every month, we’ll be unearthing a classic (or not-so-classic) vintage horror film for your delectation. If you’d asked me prior to seeing tonight’s film, I’d have told you that Hammer never made a bad movie, or near enough. I’d probably still tell you that, but tonight’s movie may be as close as they come, a fact that’s extra-confounding when you take into account how awesome it ought to be.

Here’s the thing: I love Hammer horror (obviously) and I love the Sargasso Sea stories of William Hope Hodgson. If you’ve not read them, they’ve been collected in a variety of places. Some of them are even available online and they’re well worth checking out. A Hammer horror adaptation of one of Hodgson’s Sargasso Sea stories is pretty high on my imaginary movie wish list. While that’s not quite what The Lost Continent is, it’s so very close that it should, in a more perfect universe, be one of my very favourite movies ever. And, as you may have gathered by now, it’s not.

I’ve frequently seen The Lost Continent summarised as “The Love Boat on acid”, which isn’t a terribly bad bit of descriptive shorthand. It even has its own theme song, performed over the opening credits by the British pop group, The Peddlers. The film’s first half comprises the Love Boat portion, as we’re introduced to the crew and passengers of an ill-fated tramp steamer. Everyone gets a subplot or two, pretty much all of which are completely forgotten once the ship gets stuck in the weeds and the monsters show up. (This would amount to the “on acid” portion of the equation.)

Rather than Hodgson, The Lost Continent is actually adapted from a novel called “Uncharted Seas” by Dennis Wheately. (You can see one of the passengers reading it in an early scene.) Wheately is probably better known to devotees of classic horror cinema as the writer whose work inspired The Devil Rides Out and To the Devil a Daughter. It was written and helmed by prolific Hammer producer (and grandson of one of the studio founders), Michael Carreras, who seems to have had one or the other of his toes in most of the Hammer dinosaur/cave people movies (with which The Lost Continent shares a more-than-passing resemblance). I’ve never read the Wheately novel, so I can’t say how closely the movie hews to its plot, but the film at least was obviously pretty heavily inspired by the Hodgson stories, as it features all the earmarks. From the Sargasso Sea itself, full of derelict ships and vicious seaweed, to the weird, overgrown monsters that populate it. Lost Continent does bring one new element to the Sargasso Sea table, though. What at first appear to be mushroom people in the Hodgson vein turn out to instead be a band of surviving conquistadors, ruled by a divinely-appointed boy king who is actually the puppet of a cone-hooded inquisitor, who navigate the weed-choked sea with the aid of balloons tied to their shoulders and big, round “snowshoes” on their feet. Which, admittedly, is almost as good.

All the scenes in the Sargasso Sea itself are pretty wonderfully surreal and goofy. The rubbery monsters are worth the price of admission alone, especially a big octopus with a single diving-helmet eye, and the conquistadors up the ridiculous quotient nicely. As memorable as the scenes of them walking around with balloons tied to their shoulders are, I think my favourite conquistador bits are probably the scenes in their inner sanctum onboard a purple-windowed galleon, complete with implements of torture and its very own Sarlacc Pit. Unfortunately, the monsters and the conquistadors and the whole Sargasso Sea section of the film take up maybe half the total running time, and the rest, well, it’s not so hot.

The version I watched was on DVD, but the entire movie is also currently available on Google Video, and is well worth a look if you’re a fan of Sargasso Sea stories, goofy rubber monsters, or just bizarro cinema in general. As long as you think you can get through the tiresome first half.

That’s it for tonight’s program, but don’t forget to join us next month when we jump ship to a different kind of cheesy movie, this one from the oeuvre of legendary schlock director, William Castle.