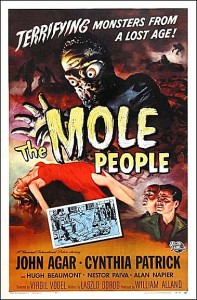 Welcome back to the Vault of Secrets, where, every other week, we’ll be unearthing a classic (or not-so-classic) vintage horror film for your delectation. For tonight’s film, we’re completing our drive-in double-feature of 50s sci-fi monster movies (the first half of which was last episode’s Tarantula) with The Mole People, a film which came out just a year later. It’s directed by Virgil Vogel and stars John Agar again, alongside Hugh Beaumont from Leave it to Beaver. The version I watched shares a disc with Tarantula in the Classic Sci-Fi Ultimate Collection. (Don’t worry. We’re not going to do the whole collection this time, just these two movies. I don’t have the fortitude for any more than that.)

The Mole People has a lot in common with other movies like Creature from the Black Lagoon, This Island Earth, and even the 1960 George Pal version of The Time Machine. This may not be too surprising, as both Creature and This Island Earth were Universal sci-fi monster pictures from the 50s, with makeup effects by Bud Westmore.

As in Tarantula, as well as Creature and even This Island Earth, Westmore does a pretty great job, and the creature suits for the titular mole people are mostly wonderful. Unfortunately, the rest of the movie…isn’t, as much.

The Mole People opens with a four-and-a-half minute speech by Dr. Frank Baxter, an English professor, giving a kind of scientific and literary context for the movie. He talks about mythological underworlds, and Hollow Earth theory, and then leaves you with a sort of weird “The events of this movie aren’t real, but they could be” message. From there, the movie takes a page from Creature from the Black Lagoon‘s playbook, as a bunch of scientists find a relic encased in stone (In that film, it was a fossil hand; in this one, it’s a Sumerian tablet) and then go on a quest to find the place that it might have come from.

Unfortunately, said quest is mostly made up of stock footage and long shots of rock climbing. Apparently, someone in the history of Hollywood must have decided that shots of people climbing on rocks were thrilling. Sadly, they were mistaken.

Once our heroes finally get down to the buried civilization, they discover that the ancient Sumerians are still alive and well, although they’ve all turned into albinos that look like aliens from Star Trek, and are so sensitive to light that a flashlight is a powerful weapon against them. Where the actual mole people of the title come in are in the form of an unexplained slave race that, presumably, were down there already. The Sumerians use them as a labour force and refer to them as “the beasts of the dark.”

In fact, the Sumerians are pretty much unfailingly painted as terrible people, with the exception of the one pretty slave girl who happens to not be an albino and whom John Agar rather creepily puts the moves on after she’s been given to him by the King. In spite of a few scenes where they’re menacing, the mole people are never really the villains, or even the main threats, of the piece and, in fact, they sort of rescue our heroes near the end. Then a rather predictable earthquake buries the ancient civilization and (spoiler!) also kills our female lead, who runs back, when the earthquake starts, in order to jump under a falling pillar, as near as I can tell. I don’t really know why.

Director Virgil Vogel went on to direct episodes of pretty much every television show, ever, and that makes sense, as there’s a very television feel to the way The Mole People is shot and staged. It could have been a pretty great episode of Star Trek or The Outer Limits, or something, but it’s not much as a movie. I really feel that I should have liked The Mole People more. It had underground civilizations and Hollow Earth stuff and, y’know, mole people, after all. And I liked it more than Tarantula, if for no other reason than because I like mole people more than big spiders. But while it’s ostensibly part of the Universal Monster canon, it’s probably better if the mole people outfits are remembered and the rest of the movie forgotten.

Anyway, that’s it for tonight’s installment of the Vault of Secrets! Join us next time when we go back to something I’ve got a little more affinity for, as we cover a couple of films from Hammer’s horror canon!