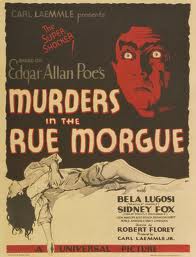 Welcome back to the Vault of Secrets, where, every other week, we’ll be unearthing a classic (or not-so-classic) vintage horror film for your delectation. Tonight’s installment is the underrated Bela Lugosi classic, The Murders in the Rue Morgue (one of many cinematic adaptations of the Edgar Allan Poe tale). The version I watched is from the Bela Lugosi Collection.

Before I get started on the column proper, it bears mentioning that I like this movie so much that I actually once wrote a story inspired by it, before I had ever seen it. The story was actually inspired by the Crestwood House Monster Series book for the movie, but that’s really neither here nor there. The point is, even before I saw this movie, I figured I’d love it and, now that I have seen it, I liked it just as much as I’d expected to. Maybe more.

Many of these older movies tend to open with some of their strongest moments and Murders in the Rue Morgue is no exception, beginning with a wonderful carnival sequence, vaguely reminiscent of the similarly-excellent Grand Guignol theatre sequence in Mad Love, where we’re introduced to Bela Lugosi’s mad evolutionist Dr. Mirakle, who wants to prove that humans are descended from apes by mixing ape and human blood. (How, exactly, this will prove anything I’m uncertain, but then, I’m not the mad scientist, here.) Of course, he can only mix the ape’s blood with that of attractive young ladies, and it’s here that the plot of the film starts to come into focus. Dr. Mirakle and his ape, Erik, become obsessed with Sidney Fox’s Camille. Apparently, all his other experiments have met with failure because the subjects have “rotten blood, as black as your sins.” He hopes that Camille will be different.

Lugosi is in his prime, here, and turns in a performance as magnetic as any he ever did, giving a gravity to Dr. Mirakle’s obsessions, which would just appear campy or exploitative in other hands. His creepy gentility when stalking Camille is excellent and the whole movie oozes atmosphere that the occasional bad ape costume or stock footage of a chimp can’t dispel.

That’s it for tonight’s installment. Join us next time as we continue our ode to romance and ape men with Dr. Renault’s Secret.