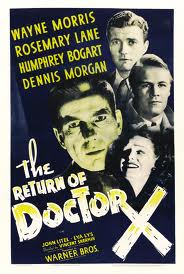 Welcome back to the Vault of Secrets, where every other week, we’ll be unearthing a classic (or not-so-classic) vintage horror film for your delectation. Tonight’s movie is The Return of Doctor X, directed by Vincent Sherman and starring Humphrey Bogart, just before he got really famous. The version I watched is from the Hollywood Legends of Horror Collection, where it shares a disc with our last movie, Doctor X, to which it is ostensibly a sequel, even though they don’t really have much in common with each other.

The Return of Doctor X is really more mystery than horror film, with the majority of its running time spent on a wisecracking newspaper reporter and his doctor friend running around trying to solve a rather perplexing series of murders, one of which has the added inconvenience that the victim shows up again very much alive! I’d worry more about spoiling the ending of this one, but it’s spoiled right there on the blurb on the back, so I’ll just go ahead and say that it turns out that the killings were perpetrated by a resurrected mad scientist (Humphrey Bogart) who needs human blood to live.

It’s a sequel to Doctor X in name only. Though both of them have characters named ‘Dr. Xavier’, they are by no means the same character and the plots have nothing else in common, save that both are elaborate murder mysteries featuring newspaper reporter protagonists (not exactly rare traits in movies of the era). None of the characters or situations are reproduced, and while the bare-bones plot summaries may not sound terribly dissimilar, their two approaches to the material could not be more different.

While I talked a lot last time about the lurid look and subject matter of Doctor X, there’s not nearly so much that stands out in this one. It’s shot in the usual black-and-white, with fairly tame sets. About the only thing that makes The Return of Doctor X especially memorable is Bogart’s cast-against-type-role as the resurrected doctor, with his shock of white hair, his waxy pallor, and his slightly lisping line delivery. The very first time he’s introduced, he’s seen stroking a white rabbit, an image so iconic that it would later be parodied in Looney Tunes.

Bogart supposedly hated this movie and has been quoted as saying, among other things, “You can’t believe what this one was like. I had a part that somebody like Bela Lugosi or Boris Karloff should have played. I was this doctor, brought back to life, and the only thing that nourished this poor bastard was blood. If it had been Jack Warner’s blood, or Harry’s, or Pop’s [all studio executives at Warner Bros. at the time], maybe I wouldn’t have minded as much. The trouble was, they were drinking mine and I was making this stinking movie.”

He never made another horror film, but in spite of his distaste, he plays Doctor X gamely enough. John Litel (who seems to have mostly done a lot of westerns) is also pretty great as Dr. Flegg, the slightly-less-mad scientist responsible for Doctor X’s resurrection. Everyone else turns in the usual sorts of performances, though it’s notable that the wisecracking reporter character is supposed to be from Wichita, which is in my own home state of Kansas, and there’s one bit where his angry boss calls him a “Wichita Frankenstein”, which doesn’t make a lot of sense, but sounds like it should’ve been the name of a local psychobilly band or something.

That’s it for this installment of the Vault of Secrets! Be sure to join us next time, when we watch Lionel Atwill reunite with director Tod Browning for the movie I’ve unofficially dubbed “the murderous Mrs. Doubtfire!”

Bio: Orrin Grey is a skeleton who likes monsters. His stories of cursed books, mad monks, and ominous paintings have appeared in Bound for Evil, Delicate Toxins, and Historical Lovecraft, among other places. He can be found online at www.orringrey.com.