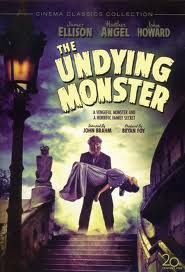 Welcome back to the Vault of Secrets, where, every other week, we’ll be unearthing a classic (or not-so-classic) vintage horror film for your delectation. Tonight’s installment is Fox’s 1942 answer to Universal’s 1941 The Wolf Man. The version I watched is from the Fox Horror Classics Collection.

I first watched The Undying Monster at the behest of The Strange Case of Mr. Hyde author Cole Haddon, who shares my affection for these sorts of old films. It was the first movie I’d seen by John Brahm, a director he recommended highly and one whose oeuvre I’ve just begun to sample. I’ve since caught The Undying Monster three or four times, and it’s rapidly become a favourite of mine.

Part of the reason is the wonderfully quaint Gothic atmosphere that Brahm, and his writers and production team, manage to conjure up from Jessie Douglass Kerruish’s novel, and with a wartime budget. The scenes on the cliffs, in the old house, and in the family crypt are all perfectly spooky, and the story has all the Gothic trappings you might like, including a family curse, servants who know more than they let on, secret passages, even rattling chains. There’s even something nicely Jamesian (M.R. not Henry) about the family legend of the beast, especially the scene in the church where the cast discusses a statue possibly representing it.

The real stars of the show for me, though, are the pair of investigators called in to solve the mystery, played by James Ellison (I Walked with a Zombie) and Heather Thatcher. Generating the majority of the movie’s comedy relief, the characters are never bumbling, but rather, are constantly making witty rejoinders, snarking on the other characters, and generally enjoying themselves a great deal as they sort things out. Imagine if a couple of characters from the Thin Man movie series decided to go werewolf hunting and you’ll get a decent idea.

Surprisingly, The Undying Monster falls into a camp of classic monster movies that attempts to debunk the supernatural at the end (See, for instance, The Mark of the Vampire in a previous column), but it has the distinction of doing so in maybe my favourite way ever, which, not to spoil too much, is basically to say, “There was never a monster; it was only a monster, all along!” And then have everyone nod sagely, as though yes, that totally explains everything.

That’s it for tonight’s installment. Be sure to join us next time when we celebrate February with an ode to romance and ape men!

The Undying Monster is available through Amazon.com