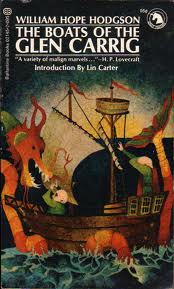 We are creeped out by cold, slimy limbs, flesh that lacks bones. I recently experienced this feeling first-hand while snorkeling, when I got to touch a live octopus. The sensation was instinctively repulsive. That recoil of hand is the essence of the squidgy. (I’m not sure where the term ‘squidgy’ came from – I always assumed it was Sandy Petersen who coined it, but I’m not sure.) We are talking about that branch of Mythosian fauna that crawls on tentacles and enjoys snacking on occasional journal-writers. The tentacular horror is a familiar icon, though Lovecraft would probably have preferred something more adjectival such as ‘glutinous’, ‘ichorous’ or ‘palpitating’, but to fans, ‘squidgies’ they are.

The prehistory of the Mythos can be traced back to the writers who influenced HPL. These include H. G. Wells with “The Sea Raiders” (1896), in which squids attack a resort in Sidmouth, and the Martians from the War of the Worlds (1898):

“A big greyish rounded bulk, the size, perhaps, of a bear, was rising slowly and painfully out of the cylinder. As it bulged up and caught the light, it glistened like wet leather. Two large dark-coloured eyes were regarding me steadfastly. The mass that framed them, the head of the thing, was rounded, and had, one might say, a face. There was a mouth under the eyes, the lipless brim of which quivered and panted, and dropped saliva. The whole creature heaved and pulsated convulsively. A lank tentacular appendage gripped the edge of the cylinder, another swayed in the air.”

Another horror writer that Lovecraft discusses in his “The Supernatural Horror in Literature” was M. R. James, who is thought of as a ghost-story writer, though his ghosts have a solidity to them that includes tentacles. He includes them in “The Treasure of Abbot Thomas” (1904), with its terrible guardian of the treasure, and “Count Magnus” (1904) which features a mysterious familiar to the sorcerer count: “The figure was unduly short, and was for the most part muffled in a hooded garment which swept the ground. The only part of the form which projected from that shelter was not shaped like any hand or arm. Mr. Wraxall compares it to the tentacle of a devil-fish….”

William Hope Hodgson out-does James many times over with his tales set at sea. A sailor in his youth, Hodgson describes well life at sea and fills it with many tentacled monsters in The Boats of Glen-Carrig (1907), “The Derelict” (1912), “The Finding of the Graiken” (1913), and my favourite, “A Tropical Horror” (1905), in which he conveys the ‘squidginess’, as well as the sound, so well:

“Rising above the bulwarks, seen plainly in the bright moonlight, is a vast slobbering mouth a fathom across. From the huge dripping lips hang great tentacles. As I look the Thing comes further over the rail. It is rising, rising, higher and higher. There are no eyes visible; only that fearful slobbering mouth set on the tremendous trunk-like neck; which, even as I watch, is curling inboard with the stealthy celerity of an enormous eel. Over it comes in vast heaving folds. Will it never end? The ship gives a slow, sullen roll to starboard as she feels the weight. Then the tail, a broad, flat-shaped mass, slips over the teak rail and falls with a loud slump on to the deck…Too late! From the mouth of the Thing there flashes forth a long, broad blade of glistening white, set with fierce teeth. I avert my eyes, but cannot shut out the sickening ‘Glut! Glut!’ that follows.”

The effect of all these tentacled monsters on Lovecraft explains his own slimy creations, such as great Cthulhu with his octopoid head, the massive dholes who eat entire planets, and Shubb-Niggurath, mother to a terrible brood. Other Mythos writers would add to this list of tentacled terrors: Robert E. Howard had his squidgy worm in “The Valley of the Worm” (Weird Tales, February 1934) and Thog the “The Slithering Shadow” (Weird Tales, September 1933). Clark Ashton Smith had his mutating squidgy sorcerer Knygathin Zhaum in “The Testament of Atthamaus” (Weird Tales, October 1932), and the White Worm Rlim Shaikorth in “The Coming of the White Worm” (Stirring Science Stories, April 1941). August Derleth gave us a massive tentacle that came from “The Gable Window” (Saturn, May 1957). Brian Lumley created a whole race of squidgies in the Cthonians, burrowing worms that could pull your house down around you in The Burrowers Beneath (1974).

For a Mythos writer, it is easy to fall back on the generic squidgy. I would caution writers from doing this. Tentacled monsters can be repulsive and frightening (as Stephen King proves well in “The Mist” (1980), but some logic needs to be applied. If you set your story at sea, then there is a good reason for tentacles. The film Deep Rising (1998) explained their gigantic worms as unusual specimens of a smaller variety. But why should there be such creatures found in the desert, except as subterranean worms like the Graboids in Tremors (1990)? You don’t have to be a zoologist, but if you can give your reader some small amount of scientific plausibility to hang from, they will fill in the rest.

And, whatever you do, don’t follow Lovecraft’s example and have your narrator write it all down as he is dragged to his death:

“My courage and curiosity wane. I know the horror that lies beyond that iron door. What if Claes van der Heyl was my ancestor – need I expiate his nameless sin? I will not – I swear I will not!… (the writing here grows indistinct)…too late – cannot help self – black paws materialize – am dragged away toward the cellar….” (“The Diary of Alonzo Typer” by H. P. Lovecraft and William Lumley (Weird Tales, February 1938).