August Derleth has been the whipping boy for HPL fans since 1939, when he created Arkham House with Donald Wandrei, a publishing concern specifically created to get the works of H.P. Lovecraft into hardcovers. Like many Mythos fans, I have read the “posthumous collaborations” and find them middling-to-dull.

What I had not known at the time I read them was that August Derleth had written them largely as promotional devices for the Arkham House books, appearing in Weird Tales and other publications where HPL fans would be. The result of these stories was a watered-down of Lovecraft’s vision (as Derleth was clearly a Christian and HPL was not) but also a widening of the Cthulhu Mythos.

Ultimately, all that matters is that Derleth and Arkham House succeeded in preserving Lovecraft’s work, saving him from Pulp obscurity. If the 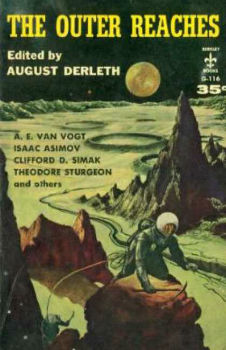 price we had to pay was some bad pastiches, the Cthulhu Mythos name (largely Derleth’s), and some collector’s hardcovers from Sauk City, WI, so be it. Job well done. Thank you, Mr. Derleth.

But let’s put all that aside. Instead of whining about how Derleth ruined Lovecraft (which isn’t true), let’s take a look at Derleth’s work, the actual stories themselves, and all kinds of stories, not just the HPL collabs. For August Derleth wrote a staggering 114 stories for Weird Tales (more than HPL and Robert E. Howard combined). Some were with Mark Schorer. Others were under the pseudonym, ‘Stephen Grendon.’ The earliest was “Bat’s Belfry” in May 1926, his last the dreadful “The Survivor,” an HPL posthumous collaboration.

What got me started on this was finding a copy of Someone In the Dark (HBJ paperback, 1978), a collection of old Weird Tales stories by Derleth, with only two of them Mythos pieces. The other 14 are largely from before 1939 (ranging from September 1932 to November 1941). A picture came to me of Derleth as a Weird Tales (as opposed to Mythos) writer in his own right, for so much of what I knew of him came from the Arkham House days.

The 14 pre-AH tales are mostly ghost stories set in England, kind of bland, mock-M.R. James stuff. If possible, these potboilers are WORSE than the later posthumous collaborations! I imagined a reality in which Derleth never heard of Lovecraft. His legacy would be no less than Weird Tales hacks such G.G. Pendaves or Arlton Eadie: dependable but forgettable.

This was the light bulb going off for me. HPL (and Arthur Conan Doyle, who inspired Derleth’s other great series, Solar Pons) saved August Derleth from his own Pulp obscurity. (Now, fans of his regional novels will disagree with me, but I am a genre guy and mainstream fiction seems even less appealing than those dull, dull WT tales). Let’s look at some examples. I wanted to avoid an uneven comparison, say, a poor non-HPL tale versus a good HPL tale, so I picked two of his best to keep the playing field level:

“Mr. George” (March 1947) is my pick for Derleth’s best non-Mythos piece (Feel free to disagree. I haven’t read them all). One indicator of its quality is that it was adapted for Boris Karloff’s Thriller (May 9, 1961) starring Gina Gillespie as Priscilla. The story is also often anthologized, as in Weird Tales by Marvin Kaye (1988). The plot revolves around a little girl named ‘Priscilla,’ who has inherited a fortune, and two aunts and an uncle who want it. The girl’s only friend is Mr. George, who used to live in the house, too, but died suddenly. George’s ghost protects the girl.

The skeleton of this story is very similar to a previous Derleth tale, “The Wind From the River” (May 1937), but, with the introduction of Priscilla, the story blossoms to a much higher pitch of concern. Three nasty people taking each other out is not as compelling as watching three vultures trying to kill an innocent and being thwarted.

“The Seal of R’lyeh” (Fantastic Universe, July 1957) is an odd choice because I find Innsmouth retread dreary, as a rule. Derleth does something a little different with this one. (“The Dark Brotherhood” is another I could have chosen for this reason, but is less Mythos.) A member of the Phillips family inherits a property and slowly begins to take on the more ominous habits of the reviled inhabitants. He also falls for his servant, Ada Marsh. The two become Deep Ones in the expected way (up to now, not-so-stunning). The new couple go in search of the Seal of R’Lyeh and find it in a submarine city where the fish-frogs worship the Great Cthulhu.

The story ends with a newspaper clipping telling that the pair were thought drowned on holiday. We, of course, know they are in that 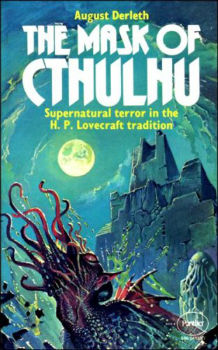 spectacular underwater city. What raises “Seal of R’Lyeh” above the average Deep One retread is that it goes beyond Lovecraft and what we see in “The Shadow Over Innsmouth,” and has a different emotional core. Derleth’s underwater city is Fantasy worthy of Lovecraft’s Dreamlands tales.

Both of these pieces are Derleth at his best. “Mr. George” shows he finally learned to add more color and character to the figures in his ghost stories. There is some fine writing in this tale. “The Seal of R’Lyeh,” though derivative, adds something to the Mythos, being a story with a truly sympathetic viewpoint character, despite the atrocities he commits in the name of his newfound heritage, and the wider view of the world of the Deep Ones is enjoyable.

This brings us to my first big question: Did coat-tailing improve August Derleth’s writing? And if so, what does that mean for all Mythos writers? Did Derleth simply improve as a writer as time went by (Most of the non-Mythos stuff is early works), or was it the Mythos that made the difference? I am inclined to the second view. Both of these tales were after 1945. Also, I find Derleth’s Solar Pons of little interest, despite being a Sherlock Holmes fan. Further reading might change my opinion. I am strangely more reluctant to take part in the Doyle pastiche than the Lovecraft. I am not sure why. Is horror easier than mystery? I think not.

The second big question, since I write Mythos tales that rely on the noir sub-genre of mystery – are the Book Collector stories being propped up by the works of Hammett, Chandler and Woolrich (as well as H.P. Lovecraft), or do they have individual merits all their own? I doubt I am the person to judge this. I’ve always thought of Mythos Noir as a clever trick. Like using a screwdriver for a wrench. Or hammering with a banana. Substituting an incongruent method of telling a story allows you to find new and interesting thinks to do and say.

This isn’t really what August Derleth (and Lin Carter after him) did. Pastiche can be simply a love letter to the original writer, imitation being the sincerest form, etc. etc. But at this point in time, we are lucky in that we can go beyond mere imitation (Write that if it pleases you. The Internet is filled with fan fiction on just about every subject.). I prefer to look at the backdrop of Cthulhu Mythos as a springboard to new kinds of storytelling. Mythos is not hack if you chose to find something new to say. And readers will thank you for it.